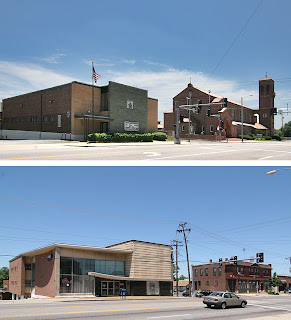 Intersection of Gravois & Heege
South St. Louis County, MO
In her autobiography, Diana Vreeland says of Kyoto, Japan, “What’s extraordinary is the way everything modern fits in with everything old. It’s all a matter of combining. There’s no beginning or end there – only continuity.”

That made me think of history unfolding at the intersection of Gravois & Heege. Granted, Kyoto history covers centuries while this intersection covers only decades, but the concept of a city being about the continual story of its people is conveniently illustrated on these 4 corners. 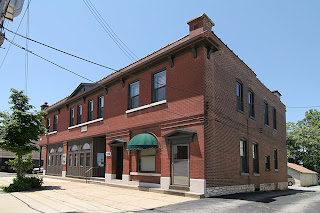 We begin with the oldest building on the northeast corner of the intersection. The building is typical of its brethren a few miles back in the city, proper, with commerce on the ground floor and apartments above. 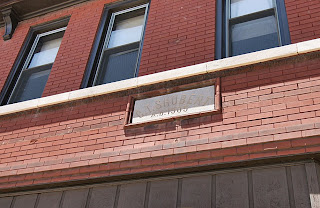 The limestone marker (above) says “C.T. Shubert, A.D. 1905.” A 1912 city directory lists it as 8200 Gravois, the grocery store of Charles T. Shubert. Blacksmith Ernest Husky and gardener Frank Wiesohen were also using this building. Today, there is still a business inside at 8227 Gravois, but finding information on this building between 1912 and now is difficult. Finding info on all of the buildings at this intersection is really difficult. Why? Limestone plates above what was surely the grocery store entrance are permanent street signs, mapping out Heege and Gravois. There is no disputing that this intersection is well past the city/county dividing line. It is firmly in St. Louis County. But pouring through both City and County directories shows decades worth of confusion as to where this intersection should be listed, thus it rarely gets listed at all!

In summary, the City directories list Hamburg Avenue – one block west of the River Des Peres – as the end of city listings. The County directories generally start their listings right after Heege Road. This leaves 7 hefty blocks worth of buildings on Gravois Road that disappear into the bureaucratic ether. If anyone knows how, or where, to find these 7 blocks of Misfit Toys in the records books, please do share. 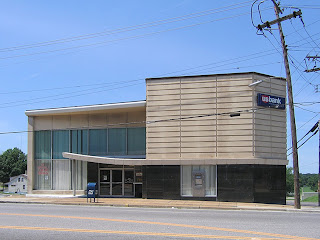 Directly across Heege is the newest building on the block. Built in 1965 and opened in 1966 as Gravois Bank, it’s a nice example of what I call Modern Institutional Whimsy (see the update below, as we now have the real story on this building). In the very late 1950s to the mid-1960s, when they were able to build brand new on county land close to the city, they made sure to give it a boldly modern look with just a few splashes of the fun that the Automobile Age called for. But you can’t get too carried away as it’s a financial institution. So, these buildings come across like a Wall Street broker adding flair to his wool 3-piece suit with a lemon yellow tie with white polka dots. 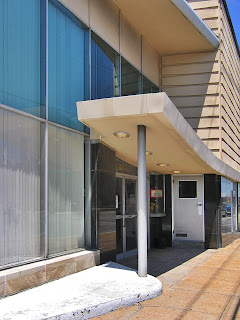 The canopy swoop, seen above, would be the broker’s “outrageous” tie. The mix of classic materials used in traditional ways topped by newer materials used in a (then) contemporary style lets the building play both sides of the, er, coin. I love that they built it right up to the sidewalk (urban traditional), but then tacked on a long chain of drive-thru functions (suburban modern) down the hillside behind the main building. To further address the “are we in the city or the county?” question, the bank has walk-up features at the Gravois sidewalk for the city dwellers still clinging to such concepts, while the cars roamed pedestrian-free at the bottom of the hill, completely unconcerned with this building. The whole complex is schizophrenic because of these dueling concepts, but that’s also what makes it so endearing. 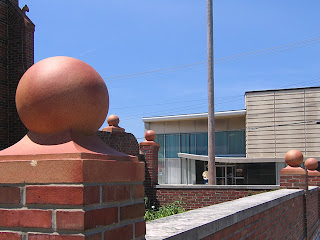 Walk directly across Gravois, turn back and see this wonderful juxtaposition: 1915 Renaissance Revival framed by 1960s Mid-Century Modern. This is the continuity of this intersection, one generation sharing space with the next, and both of them belong there because they are of their times and in the now. 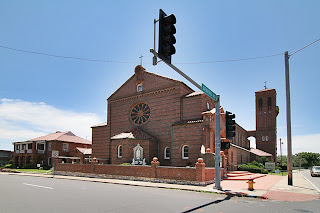 This is St. George Catholic Church, built in 1915. Today, Affton claims this parish as its own, but in 1966 the City directory listed a bowling alley in the building next to the church (to the left in the above photo) on Heege Road. Is the bowling alley still there and in use? And exactly when did Affton decide to claim only a portion of this intersection? 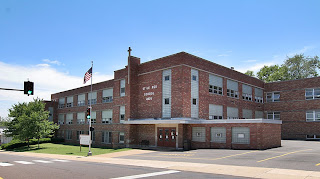 A tad further down Heege to the South is (above) the St. George Catholic School, built in 1962. Its toned down grade school modernism underscores the unfolding good fortunes of the St. George parish in the mid-century, and I love that they chose an era-appropriate design. Though churches are always keen on the most modern and envelope-pushing designs, and God bless ’em for that, truly. As we stand at the ornate front entrance to the church and look back east, here comes another of those decade-hopping delights: Classical Pastiche, meet Kennedy-era Face Lift. 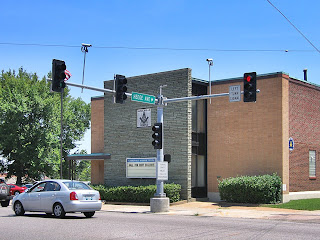 The final building of this most interesting intersection is the Gardenville Masonic Temple. 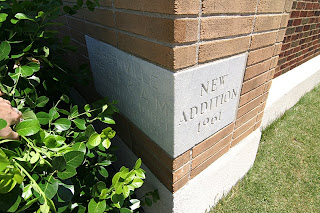 The cornerstone efficiently catalogs the history for us: The original brick building went up in 1926, and the “new addition” is from 1961. And what a great job was done with the choices they made. 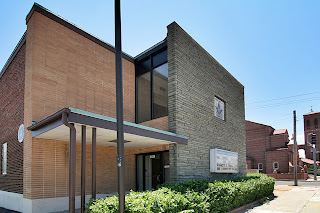 Blonde bricks and green-tinged grey flagstones make a neat and compact geometry, sophisticated yet no-nonsense. I’m guessing that they wanted a new, modern face to coincide with opening up the hall to the general public. And they were in a great location, being able to accommodate both the city and county crowds of the teeming Babyboom era. Lots of space in the long building, lots of parking to the side and back, and very convenient for a St. George wedding to cross the road for the reception. 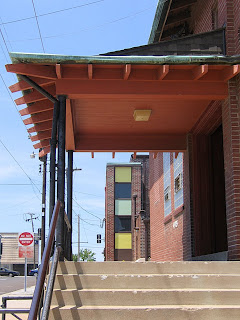 Directly behind the Mason’s hall, on Heege, is a 1915 building that says its a Knights of Columbus hall owned by the Catholic church. It’s also originally listed as a school, so I’m supposing this was the original St. George Catholic School until the new one was built directly across the street in 1962. It’s a very serviceable brick building with a few Craftsman flourishes. But check it out when contextualized with the colorful metal panels on the rear of the Masons’ addition. Both items are elevated in aesthetic appeal. 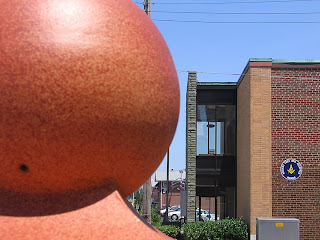 Just like a traditional ornament becomes suddenly buoyant when flashed into an ultra mod context. Just like a good sauce gets its tang from many different spices, a vital built environment gets its spice from the variety of time.

If we blanch at the generic look of far-flung suburban areas, it’s because everything is usually of the same fiber of the same time. There’s no contrast, which means there’s no “I hate that” vs. “I love this.” On the other hand, it’s foolish to try and erase the historical spunk and progressive funk of the urban areas; it’s like throwing out an entire family photo album because you hated your Mom’s hairdo in 1972. The Gravois & Heege intersection is like a fly trapped in amber, preserving that inevitable transition from City to County, from traditional to modern. But unlike a prehistoric artifact, all 4 corners are alive and productive, as it should be, can be, when we accept the uninterrupted continuation of time.

B.E.L.T. readers are a genuinely knowledgeable and helpful society of sharp people, and thank you for that. 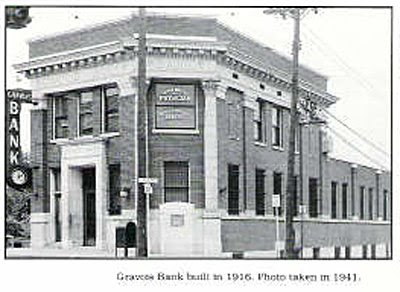 Steven Schaab grew up near the Gravois & Heege intersection so has the scoop on the evolution of the bank. He sent me some pages from the book Sappington-Concord A History published by The Sappington-Concord Historical Society, which have these two fabulous photos.

The building has a deep history of keeping up with the times, and is much like an architectural text book of America’s 20th century progress. The corner building went up in 1916. In 1948, they introduced an early edition of an automatic teller machine, in 1949 they installed central air, and in 1967 they installed computers.

The book says, “In 1957, Gravois Bank opened two drive-up windows. The drive-up windows were so successful that in 1963 they expanded to six, then eight, with two additional walk-up windows.” So, the fabulous sign remembered fondly by the locals (shown above) was the graphic calling card for the car-culture addition to the bank.

Since you can see that the original 1916 corner facade still shines in the 1961 snapshot, maybe the 1965-66 listing is for the re-facing we still see today? They were highly motivated to keep remodeling, and each new piece was very well done even when the change was radical.

From the change to Mercantile Bank in 1985 to the recent merger into U.S. Bank, the hip signage had to go (and anyone know where it went to?), and these corporate owners have not made any signifgant exterior changes. But this building is a seasoned transformer and may be feeling overdue for a new facelift. Not advocating, just noting its migratory patterns.

Thank you to Mr. Schaab for sharing the Gravois Bank building story.

16 thoughts on “Gravois and Heege, An Intriguing Intersection”