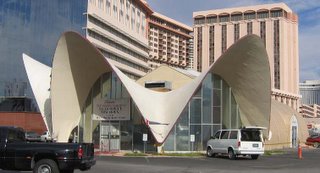 Fresh off the evening plane, and my friend drives us directly to the heart of Las Vegas Boulevard – The Strip. From the passenger seat, I soak in the throbbing lights, pirate boats, fountain shows and drunken revelers. But amidst the flash, what truly catches my eye is a tiny dark patch. Alone and deserted in the shadows is a round series of white clamshells, the strangest and most beautiful thing I’ve yet seen on The Strip. I ask my friend to please bring me back here in the daylight so I can get a better look at the building in the center of the Black Hole on The Strip.

Come to find out that within my first 5 minutes in Las Vegas, I fell in love with a building that’s scheduled to be demolished. But of course! As in St. Louis so it remains in Vegas: If I love it, it shall come down. For a person leaving St. Louis in disgust over how it wastes its evolving architectural heritage, Vegas was either the best or worst place to go, depending on what lessons I needed/wanted to learn. 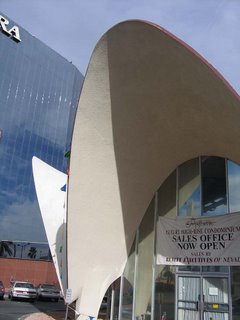 The building is the lobby of what was the La Concha Motel. The motel portion was demolished in December 2003 but the famous lobby remains behind as the sales office of the company schilling space in the skyscraper condo slated to rise in its place. Considering that downtown Las Vegas regenerates itself about every 15 years, the La Concha – and it’s next door neighbor, the former El Morocco Motel – has been a tenacious little trooper. But times up, ta ta. 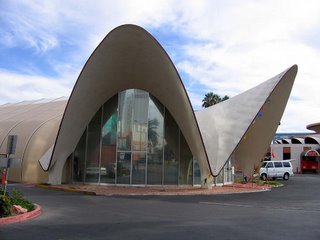 But wait up! Turns out there is a Nevada Preservation Society! Concerning Las Vegas, would this define the phrase “exercise in futility?” But their first successful “save” is the La Concha lobby, which will be cut into 7 pieces and moved a couple of miles away to serve as part of the anticipated neon sign museum. Yes, there are small pockets of people trying their best to preserve Las Vegas history, and you’d think in a town with such deep pockets it would be easy, but no.

Las Vegas owes its life to the building of the Hoover Dam, which was a WPA project in the 1930s, so “history” is a vague concept for this town. When locals say a building is old, they mean it might be 30 years old. When any city on the globe can be recreated with the proper props and financial backing, who cares about the physicality of a history that reaches back maybe 70-odd years?

Look to the mountains that 360-circle Vegas and you can feel the land’s history. It’s all insanely gorgeous, very Butch Cassidy & the Sundance Kid. Step onto the foot of a mountain, stare up into the abyss and know that not even Steve Wynn can recreate something this awesome (sure he created a forest, but it has that 15-year shelf life). But because of that mountain ring, there is finite space to build, and since Vegas exists solely for gambling, the most important buildings accommodate that activity. 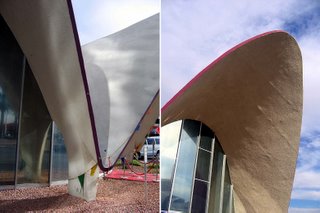 Gambling only requires a place for someone to sit down and bet. It truly doesn’t matter what the place looks like; money leaves you just the same at the Bellagio as it does at the slot machines in the gas station bathroom. With gambling, it’s not the container but the content, and if a particular building stops pulling in gamblers, then the building has to go. It’s that simple, and in a city where everything is a façade, I adore that rare form of honesty. Which makes the saving of the La Concha lobby all the more remarkably bizarre. 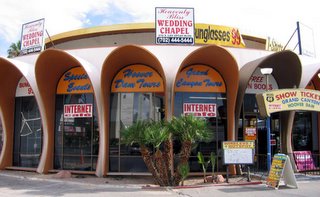 The lobby of what was the El Morocco Motel sits next door, and I’ve never seen so many activities crammed into one small place. This building wants to be everything to everyone in the remaining months of its life. 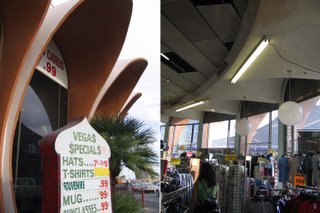 There’s been no news about El Morocco being spared in a similar manner, but considering how stunned Preserve Nevada must be over the La Concha victory, it might be hard to juggle two saves at a time. Plus, Las Vegas citizens simply don’t care about saving “old” buildings when they need all the land they can grab to provide new housing for the 5,000-7,000 people pouring in each month. But more important is the honesty of the chairman and CEO of Harrah’s, Gary Loveman when he told Las Vegas Review-Journal, “I’ve never understood the hand-wringing about something new, especially in Las Vegas… If there isn’t any exciting new development, then what do you have?”

Besides, if anyone truly misses these – or any – buildings after they’re gone, Las Vegas can always recreate them, if the price is right. 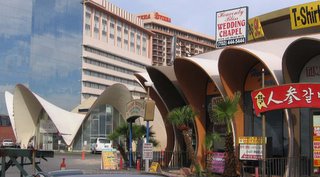