Speeding down a Las Vegas freeway, pharm and from the first glance out the car window I really liked this building. When I finally got up on it in daylight, I fell in love with it. 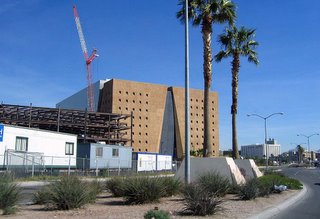 It’s simple and flashy; simple in its shapes and materials, flashy because it writes those shapes and materials in big, broad, bold strokes. Yet it never goes overboard, or crosses the line into gaudy. And this is Las Vegas, where flashy is good, and the gaudier the better. While this building acknowledges the indigenous flash, it refuses to give in completely, almost as if trying to lend a little class to a call girl of a city. 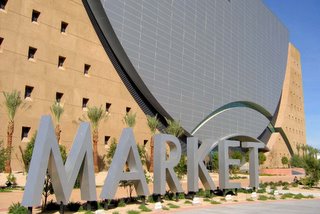 Even as I investigated the precise details of the building, I had the feeling it would never make the pages of Architectural Record. It’s as if the building has a scent that will keep the serious design media away, even while it was built to attract exactly that ilk (wholesale-wise). But this isn’t the building’s fault. This is about The Expertly Stated Opinion. 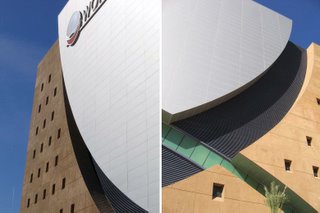 The world of design is completely and utterly subjective, there is no true right or wrong because it’s all opinion. The world of design is deep and wide, with lots of items vying for attention. Attention comes in the form of industry talk leading to press leading to the general public’s awareness of the item. If an item completes the trifecta of attention, it is commonly accepted as good, or good enough to deserve attention.

But how do you get the ball rolling? By casually but forcefully stating your opinion while talking to the proper group of people. It’s imperative that the person making the proclamation has some form of authority (signs your paycheck, knows the people you want to know, can bring attention to your project, etc.), and that it’s mixed with just the right tint of enthusiasm. If the balance is right, The Expertly Stated Opinion is naturally regarded as fact. I’ve personally experienced this phenomenon in action in architecture offices, but it’s also the basis of the entire field of media critique, from movies to records to boots to books. 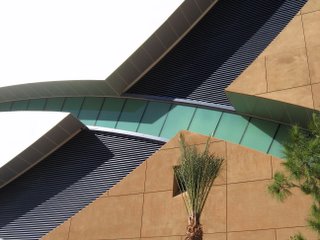 I bring this up not to form a game plan towards convincing anyone that the World Market Center is worthy, but to explain why I feel the official architecture media will not accept it.
The architects of the building are not culturally cool – they’re responsible for The Bellagio, for chri’sake! People within the field don’t want to give the firm props, but sometimes have to. And from content to exterior, the building is trying to lend some sophistication to Las Vegas, an exercise in futility if ever there was one. Those 3 strikes will keep the architecture media community far, far away. Maybe if Santiago Calatrava were overheard at a cocktail party saying he liked the World Market Center building, it would appear in the Art & Design section of New York Times? Nah.

But a building doesn’t need to be deemed worthy by the cognoscenti for me to like it. And I don’t even know if this building is thoroughly lovable, because I couldn’t get inside to feel it, see how – and if – it works as intended. I fell in love with it from the aesthetic part of my soul and through the camera’s eye. 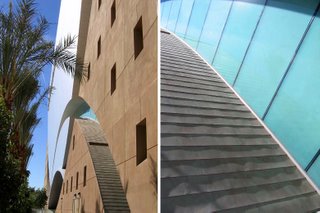 Plus, I could actually walk up the side of the building! Those sweeping arcs carved into the façade are just like ramps. Something tells me they didn’t intend for that to happen, and surely their intended clientele would never walk up the side of the building. But I did in order to get a closer look at the building’s details, and others probably will for less esoteric reasons. I predict that the first time they catch someone climbing, a protective fence will go up.