It’s too easy to get sarcastic and nit-picky at Christmas time. There is no sport in shooting fish in barrels or lobbing darts at NASCAR Santa… 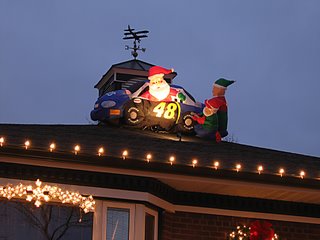 And it’s useless to let the continued proliferation of Inflatables get me down. 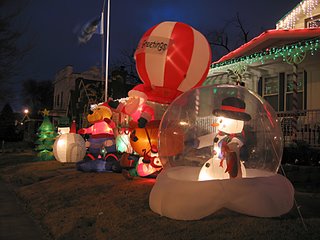 Spending well over $500 to cram 5 large objects onto a lawn the size of a bread box may actually be less harmful then spending that much on Christmas toys for one child.

Yes, it’s too easy to bag on Christmas, and fighting it brings you no victory. Or to paraphrase a character on The Wire: We try to duck a punch or two rather than lean into every last one. Rather than sulking about it like a 13-year old goth girl hibernating in her bedroom, I’ve learned that making an effort and stepping up to embrace the holiday is much more rewarding than fighting it. 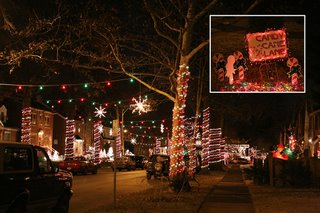 St. Louis Hills has become the Must See Christmas Lights destination, with Candy Cane Lane (above) being the center point. Just behind Ted Drewes, Murdoch Avenue has perfected how to take advantage of old fashioned urban density to create a holiday city within a block. There is music and movement, and on weekends, the residents of the block come out to play Welcome Wagon to the steady line of cars floating through. They roast treats over an open fire, pass out candy canes and… 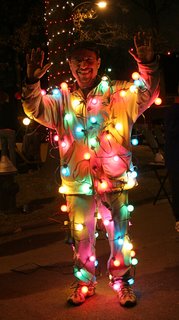 …dance the hoochie koochie! Light Suit Man (above) graces Candy Cane Lane every weekend in December, and because of his unflagging goodwill and genuine joy, I consider him the Ambassador of It’s Christmas Time in the City. 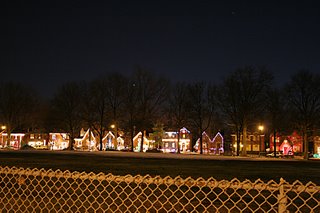 But right before entering the CCL, a glance to the south, across the schoolyard fence, reveals another festive block, Neosho Avenue. 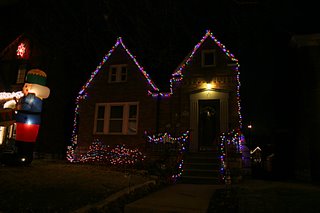 While certainly attracted to the bodacious charms (and free candy) of The CCL, I prefer this block for both its quiet magic and its “less is more” aesthetic. There aren’t a lot of bells and whistles here (the Inflatables content is rather low), just a lot of lights artfully placed. One of the more striking homes is the one above; by opting for subdued, darker lights they become the comma in a sentence. 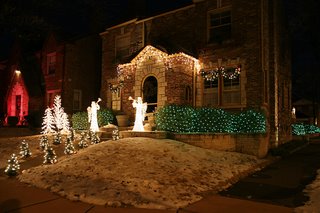 My very favorite Neosho home is above. I swear an art director must live in this house, because the toned-down, fine-tuned attention to the placement, palette and mood of the lights just reeks of a Metropolitan Home layout. If this block had their own Light Suit Man, he’d stand in front of this house in an Armani suit with just a single key light on the mistletoe pinned to his lapel.

So, these are some of the things that have made my season bright. If you have a moment, venture over to St. Louis Hills, but as you travel, pay attention to the beauty all around you, and have yourself A Merry Little Christmas.