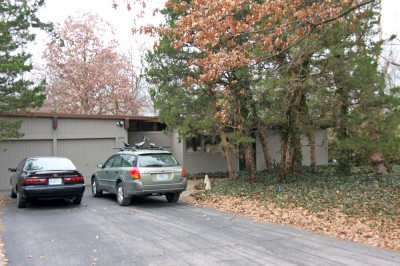 Inside the mid-century modern subdivision of Craigwoods (previously covered here) is a home that tends to get overlooked. Compared to some of the flashier beauties around it, this home demurely hides behind a fence of mature trees, vegetation and shadow gray paint. So it may be a bit surprising to learn that… 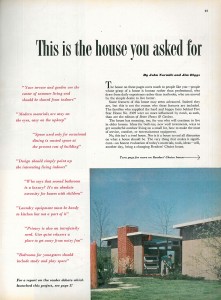 … it’s Five Star Home No. 2309, “the house you asked for.” Click any of these photos to read the magazine article at a larger size. 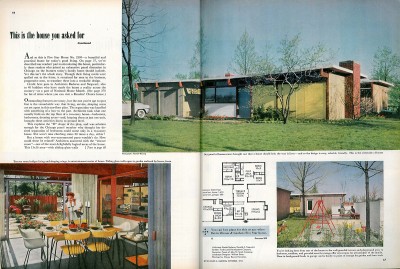 The September 1953 issue of Better Homes & Gardens (courtesy of Nathan Wilber) devoted about 13 pages unveiling this model after spending the better part of a year quizzing families about what they wanted in a new home. The findings were worked into a plan by architects Brooks Buderus and Gerald Siegwart, and 40 builders across the country erected the homes as part of the National Home Month. In Kirkwood in 1953, Burton Deunke builders had just begun the Craigwoods subdivision, and added the BHG Five Star Home into the mix. 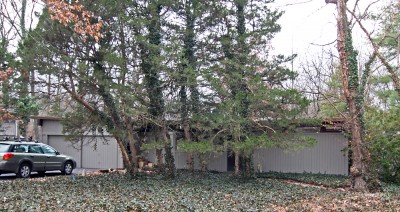 This home at 719 Craigwoods is 1601 square feet with no basement, just like the original plans. Comparing it to the front view of the version built in California shown in the magazine article, modifications have been made to it over the decades. It looks like they replaced the picture window with much smaller windows, and carried the grey siding from the garage end all across the front. It’s not as exciting to look at from the street as it was when originally built. But while walking past it, it’s easy to see that most of the action goes on beyond this now-sedate front facade. 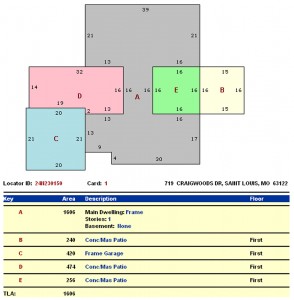 The floorplan as provided by St. Louis County does not begin to convey just how amazing the layout is. Compare the above with the colorful layout below, and see that all owners have not altered the basic footprint. 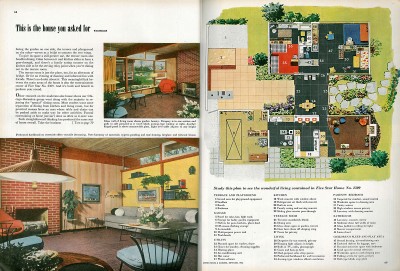 Now you begin to see why this plan was picked to fulfill their panels’ wishes for “the simple desire to live better.”  According to the article, one thing all panelists were clear about was that the house should look the way it lives. They also wanted to live on a single level, with one respondent saying she would “not miss running the stairs 20 times a day.”

The U-shaped kitchen (above left) was considered the ideal format for efficiency, and they all agreed that there was no need for a formal dining room because “formal entertaining at home just isn’t done as often as it once was.”  This may be because America was embracing a blend of indoor/outdoor living, and this Five Star Home provided 2 paved outdoor areas tucked into the H-shaped plan.

One respondent requested that these areas be paved because they didn’t want to deal with cutting a lot of lawn. Looking at the existing Kirkwood model, these homeowners really took that to heart, turning the front yard into a sea of ivy. And jolly for them – lawn mowing is the pits because it’s a useless crop requiring harvesting week after week for months on end! 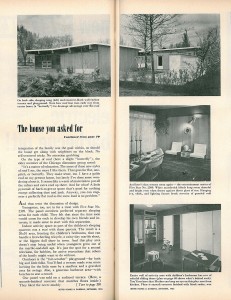 Considering the pedigree of this Craigwood’s home and what lies beyond the front elevation, we’re reminded that one should not judge a book by its cover.