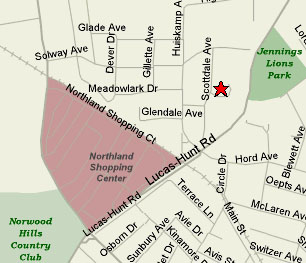 Darla Court, Jennings, MO
As if Northland being demolished wasn’t hard enough, I found my childhood home behind Northland (on Meadowlark) now boarded up and condemned. A tangible piece of my personal past is being wiped off the map, and the timing of it borders on overkill.

The neighborhood itself is a classic hodgepodge, with homes ranging from the early 1900s to the late 1960s, and while half of the houses are as crisp as I remember them, the other half are abandoned and rotting.

We always traversed this neighborhood on foot, so I knew it intimately…or so I thought until I took a turn down a street I’d never been down before. This small area couldn’t be more tucked away and ignored, and thus has no compulsion towards suburban civility, feeling more like a bayou swamp settlement. In the midst of Midnight in the Garden of Good & Evil I discovered a portal into The Modern WayBack Machine.

By taking a curious right and heading down a steep hill, I rolled back in time to a Jet Set Duplex Park. A paisley-shaped street is ringed with pristine examples of optimistic car culture multi-family dwellings, all butterfly winged carports and picture windows. 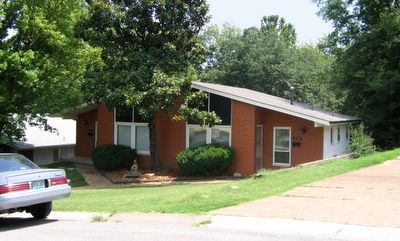 There were a few variations on the theme (above), but all are low-slung duplexes lovingly tended to. 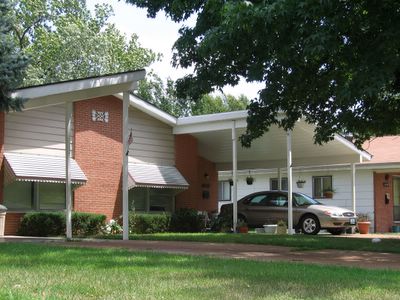 I was numb as I stood gawking in the middle of the court, feeling as if I’d stepped into a 1960s postcard. The intense heat of the day made my head woozy, so I assumed I was imagining this clean and precise oasis of residential modern in the midst of a forgotten swamp land. But it was true! On this island, martini shakers still rattled at hibachi BBQs while alligators and scorpions surely lurked in the overgrown lawns of the homes outside this bubble.

How did I miss this place all these years?
I asked my parents about it, and they, too, had no idea it existed because they didn’t even realize you could go east of Huiskamp Ave in that neighborhood. So I didn’t feel like such a dunce for overlooking it. Plus, it’s tucked into the valley of a large dead end.

St. Louis County property tax records show that my Mid-Century Model Train Neighborhood was built in 1968 as Glenview Court. Meaning, it was built while we lived in the area, but sailed under the radar.

Most every duplex still retains its original and unique metal medallion on the front facade (note tikki stone faces, above middle), and the owners sit in lawnchairs under their carports wondering why this chick is casing their court. I keep returning because it’s like the Demolition Gods threw me a bone, allowing a new chapter within the doomed pages of my architectural biography.