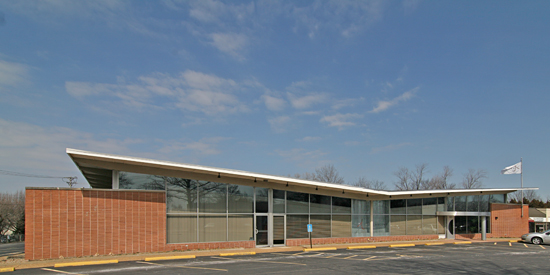 This 1961 winged beauty started life as Flotken’s Market. The Flotken family has a website about the history of the store with lots of interior photos. There’s even a blog where you can contribute memorabilia of the place, which includes a copy of the original 1961 lease.

One touching thing from the Flotken’s blog is the 2006 obituary for owner Frank Flotken. A paragraph and a half is dedicated to this building:

“In 1961, he opened a second store at 9643 Olive Boulevard in Olivette. Mr. Flotken designed a unique roof that descended from the sides to the middle, giving the appearance of wings.
Mike Flotken explained his father’s design concept in an interview with the St. Louis Post-Dispatch. “Dad wanted as much natural light as possible. With a traditional roof, you only get light from the front, and the ‘flying wing’ design allowed light to come in from the sides as well.” 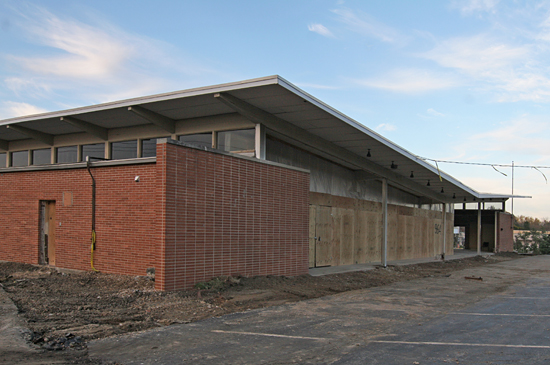 As of Fall 2012, a local construction company is in the middle of remodeling the building for jewelry store The Shane Co., who plan to move in early 2013. Compare this construction photo with the one above to see how much they have removed. Much of the brick from the demolished kneewall was still sitting in the dumpster the day I photographed this. 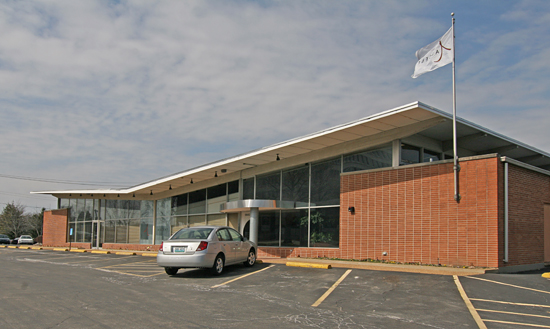 While investigating who was doing what to this building, it was shared by Esley Hamilton that there is a correction to who the architect is.  From conversation with a former employee who remembers working on the building, Elsey learned this is the design of Sommerich & Wood, who also did the 1958 Red Bird Lanes. 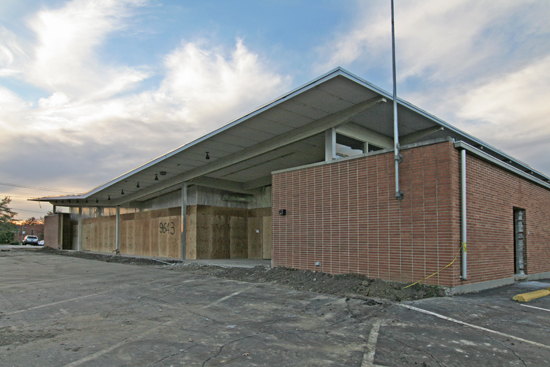 While a noticeable bit has been done to the exterior, I am optimistic that not much more will be done for two reasons:

1) A jeweler benefits just as much from natural light as a grocer did, right?
2) A peek behind the plywood walls shows a good amount of interior construction has already taken place, including metal framing of walls reaching up to the roof structure. Meaning, they can’t alter the basic structure too much more, only mess with the front facade.

Granted, a lot of damage can be done with a new facelift. But so far, they’ve left so much in tact that it feels like The Shane Co. knows the allure of their new mid-century modern building. Let’s all keep an eye on their progress, and speak up if you see any new developments, please.

Thank you to Andrew Weil of Landmarks for giving me a heads up that this remodel is taking place.