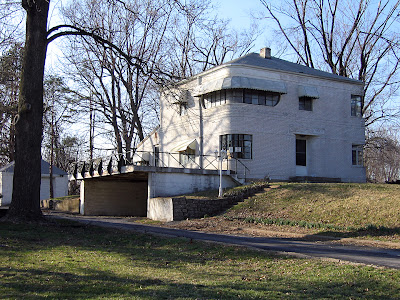 11851 Benham Road
Unincorporated North St. Louis County, MO
I’ve admired this house for decades because of its simplistic deco beauty, and that it’s such a rare creature in this part of far North County. Near to where highways 367 and 270 meet, if the architecture is not commercial or Christian Northeast Hospital, it’s the standard ranch issue of suburban towns developed in earnest during the mid-1960s and on. But this little gem went up in 1935 or 1938 (depending on which records consulted), when the area was decidedly rural and Dunn Road was the highway system. 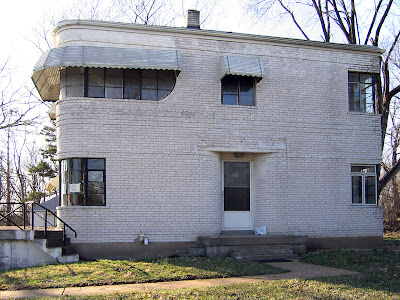 The St. Louis County Parks inventory of historic buildings reveals it was originally known as the Everett D. Fry House. The home is 2 stories, 2 bedrooms, 2 baths, central air and 1964 s.f., with an ingenious carport/terrace double-duty spot on the south elevation. During the time I’ve been acquainted with it, the place has always been pristine, and modest about being a white rose among carnations. But in the 21st century, it got a little raggedy, and for over a year the home has been vacant.

On my last visit, I found the above signs in the window. A search for available FannieMae properties does not list this place, and after a number of owner changes in the past several years, it now belongs to an LLC, who bought it for $93,000.

Highway 367 is just about finished with a major (and much-appreciated) overhaul. Benham is a 2-lane road that parallels the highway. As the highway revamps, many of the ranch homes on Benham – north of this site, – have been bought and torn down. I’m assuming new homes will rise up in their place, but it could just as easily swing into commercial use; this part of town is transforming rapidly after a long period of stagnation. 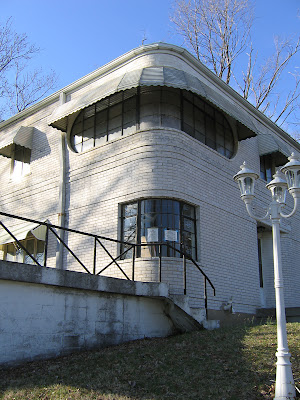 This house would be a dream achievement for certain types of residential art deco aficionados. But there are now so many physical and market-driven barriers piling up around it that the prognosis is bleak. Another “that’s a damn shame” may be added to the list.

2010 UPDATE
This home has been bought and is now fully occupied, with vehicles parked in the carport and a tidy yard. Thank you to whomever saw the beauty of this home!