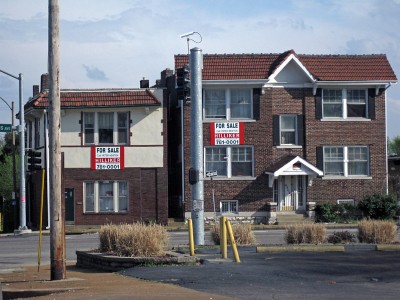 This is a rather rundown intersection in the Bevo Mill neighborhood, but if you look through the grime, there’s some interesting visual history of when St. Louis (like other Rust Belt cities) actually produced goods, and those industries dictated the transportation, housing and society of the neighborhoods they resided in.

While stuck at this stop light contemplating these fanciful thoughts, I noticed the two buildings above had Hiliker For Sale signs.  The building on the left is a 2-family flat from 1915, and next door is a 4-family from 1915. 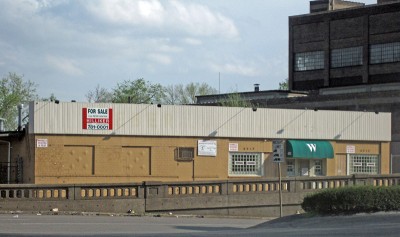 And the one-story industrial building next to it, from 1918, is also for sale by the same company. 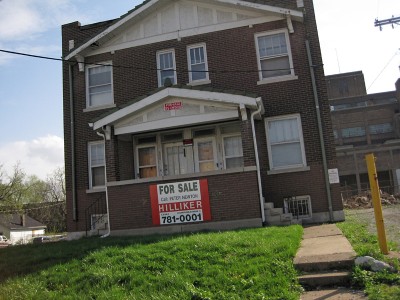 Even around the corner, on Meramec, the 4-family from 1915 is also for sale. 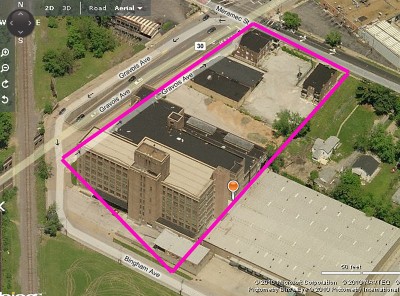 Which means the entire block bound by pink in the above aerial map (courtesy of bing.com) is for sale by the same agent, though info about these buildings are not on the Hiliker site.   Included in this full city block is the jewel of the lot… 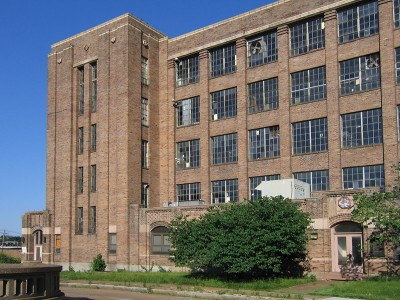 …the 9-story-total factory from 1928 which was formerly the Graham Paper Company. It sits majestically at the top of the viaduct, and in the late 20th century it served as a storage warehouse.  I remember idle talk in the early 20s of it becoming loft apartments, but obviously that never happened.

All of these properties currently for sale are listed in city records as being owned by 4230 Gravois LLC, c/o Imagine Schools, which begs the question: did this organization buy all these properties with the intent of creating a campus, then changed their mind? 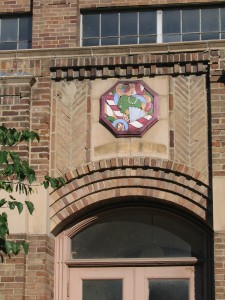 The Graham Paper Company building is a gorgeous example of dignified industry, which was par for the course for the 19th-into-20th century, and I admire how they tucked this large complex into a block already populated with multi-family housing.

What will become of this block? Must the buildings be purchased as a whole, or will “the whole” turn off any but the deepest pockets? It’s easy (but not desirable) for potential developers to dismiss the residential and remuddled one-story warehouse as demolition fodder, but the Graham complex cannot be denied.  It’s a strange and intriguing plot of land, and the possibilities for a new use are plentiful…and worrisome.

If anyone has information on what’s happening with this block (including – and most especially – history of Graham Paper Company), please do share. 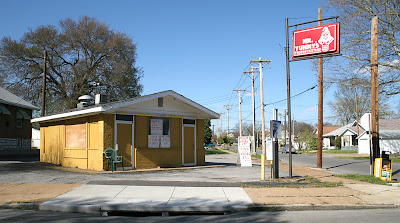 Mr. Yummy’s @ Bates & Ulena
South St. Louis, MO
“Livers, Gizzards & Wings… oh my.”
It’s an oft-heard reaction to one of the signs on the Mr. Yummy’s building. Mr. Yummy’s is my neighborhood’s touchstone; it’s unique and endearing with a curious connection to the past. Because of all this, I’ve been sitting on some information about the place for most of the year. 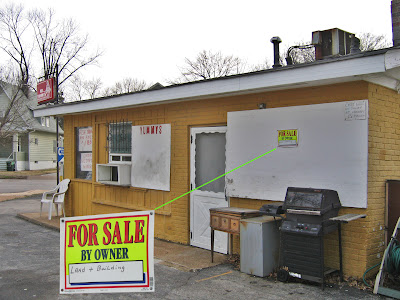 This past winter, the owner and proprietor of this venerable take-out burger and shake shop tacked up a For Sale sign. While this tiny little sign rattled my cranium, I also realized that he hadn’t bothered to include his contact information. Rather than a serious bid to sell the place, maybe it was just a physical manifestation of some form of frustration he felt? 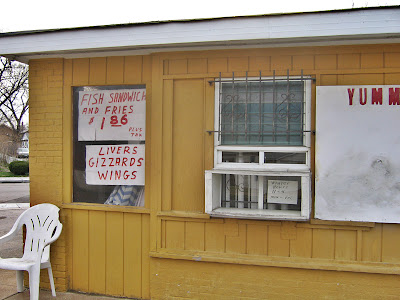 My worry is what the sale of this place could do to the neighborhood. Is it possible for someone to buy it and continue to run it as a neighborhood burger joint? Or is it more likely that someone could buy it for the property alone and do something heinous to it (like rezone and build a McMansion!)?

Mr. Yummy’s is an odd little anachronism that could only survive in this part of town. The owner is a war veteran (I’m assuming Vietnam, because he doesn’t look old enough to have been in the Korean) who freely dispenses liberal political views as he grills up burgers so greasy that they saturate their brown paper bags, and will slip out onto the pavement if you don’t know better than to hold it from the bottom.

He has always had the ultimate working hours: 10 a.m. – 5-ish p.m. There was always a huge lunchtime crowd of construction and utility company workers dining in their trucks, scattered across the large parking lot. Then there was the underage after school crowd who bought sodas and ice cream treats as a pass to simply hang out. And then there’s the newspaper machine and the only working pay phone within a mile radius, which still has people hanging from it all hours of the day. 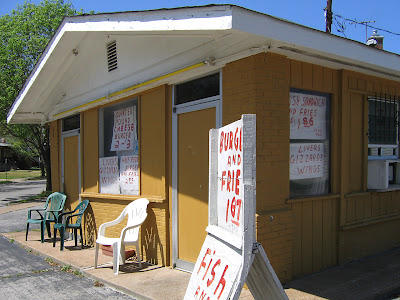 Taking a look at the public records of Mr. Yummy’s, seems that very pay phone was “grandfathered” in a 1998 permit transaction. Surprising to me is the age of the building: Fast Food – No Seating 520 s.f. brick and wood structure built in 1925! Was it a gas station at one point, or always some kind of food establishment?

I have talked with some 40- to 50-something folks who grew up in the neighborhood, and it has been “an ice cream stand” for as long as they could remember. The current owner bought the place in 1978 for $10,000, and now he just must be tired. He was lightly adhering to his abbreviated winter hours when the For Sale sign went up. Now that it’s spring, it seems he opens up on a whim; I drive by every evening hoping to see his doors open, hoping that he’ll get back into the swing of it and reconsider. If he’s open twice a week, it’s a miracle. 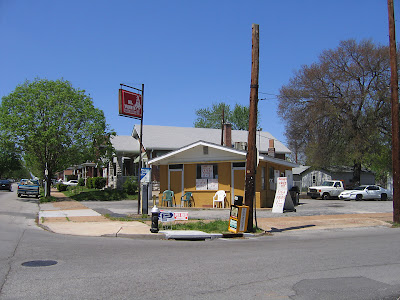 Very recently, the owner added a 2nd For Sale sign smack on the outside corner of the lot. It’s very tiny, and still lacks contact information, but now more people are noticing that the place is on the sale block. Look to the right of the above picture and see how a neighborhood car salvage guy is now using the back part of the parking lot for his overflow. This is not a good thing, not good at all.

A 5.11.07 building inspection turned up 5 violations that remain unresolved. I’m supposin’ the owner put up his 2nd For Sale sign in reaction to that. I decided to finally say something about it with the hopes that someone will want to save the place… none of us want our neighborhood mascot to go away or be radically altered. It’s hard to bear the weight of an era sighing to an end. Fingers crossed that there’s an optimistic new chapter. 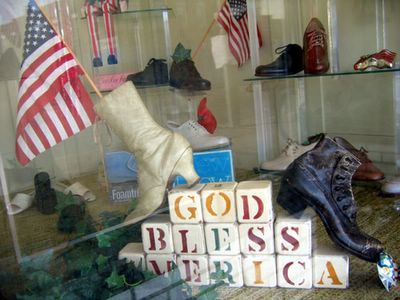 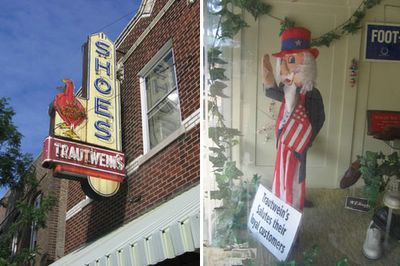 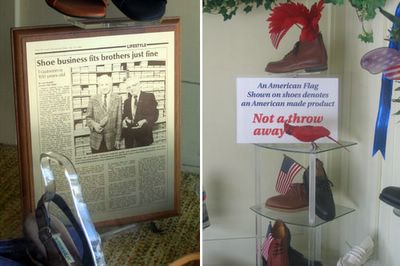 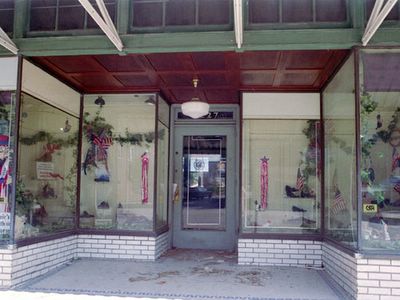 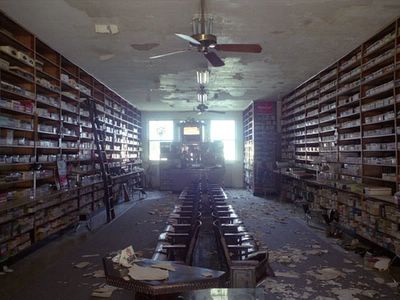 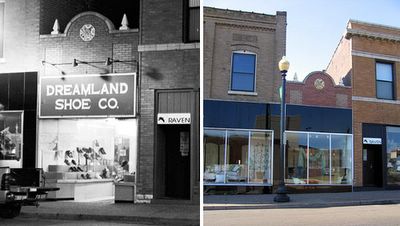 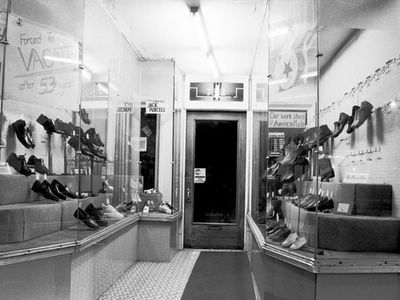 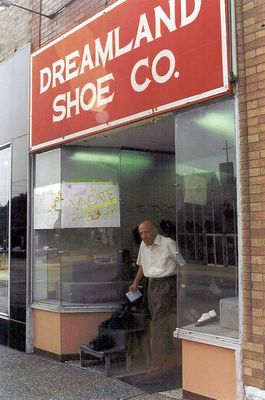