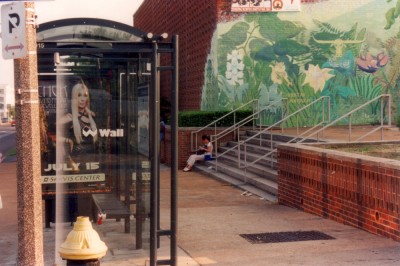 Found it!
Well, kind of.

The 1964 addition of the former Southwest High School (now the Central Visual/Performing Arts High School) once sported a notorious mural. A portion of its lush exoticism can be seen above.  The mural was an identifier – of a neighborhood, of an area and a great marker when giving driving directions.  Shortly after the public school became a magnet in the mid 2000s, they painted over the mural with a dull dark brown that attempted to mimic the brick. The irony of quashing vivid artistic expression on the wall of a creative arts institution was not lost on anyone.

Once the public art was gone, folks like myself who track the built environment started looking through our files to find any pictures we may have taken of the mural. I know I have a full-on shot of it from the mid-1990s because I used to live across the street from the place, and remember walking over to it, purposely to document the mural. For those of you who spent decades shooting film, you also know you have boxes upon boxes of photographs, and who has the time to sift through all that? But it’s been bugging me for far too many years: where’s that mural photo?

While looking for something else, I ran across this photograph. Because of the concert poster in the bus stop shelter (also known, briefly, as a Cher Chapel), the photo was taken in the early summer of 2002. This brief glimpse of the Southwest High School mural removes finding the better photo from my To Do list. Well, kind of.

If any of you know the origins of the mural and the decision to blot it out, please do share in the Comments.

UPDATE
Jim Wirt was one of the students who helped paint the mural, dating it back to 1983. And thanks to Michael Allen for passing along this post with black & white photos of the mural.