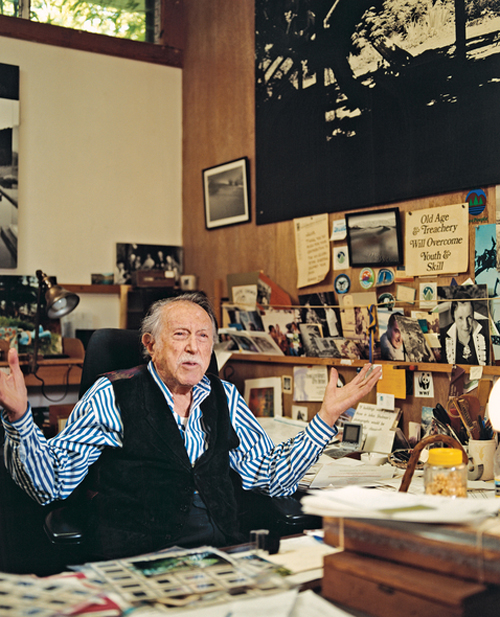 Upon the death of Julius Shulman, there have been several fine remembrances of his work and its impact, and the imminent release of the amazing documentary Visual Acoustics to DVD takes on a heightened significance.  As the media takes notes of his towering artistic contributions, I think about personal gratitude to Julius Shulman for altering the path of my life.

Having always loved buildings, I thought that designing them would be the best way to consummate the relationship, so I headed down the Architectural Planning degree path.  I liked drafting floor plans and designing spaces, but it was during an Architectural History class assignment to photographically illustrate various types of architecture using local buildings that the light bulb went off: I love interpreting the buildings that other people made.

I thought of all the alluring black and white images of mid-century modern architecture that haunted my imagination, and realized those were the true inspirations.  Then I realized that those photographs were all taken by the same man, Julius Shulman! His work was consistently inspiring, so I put the drafting board on ice, pulled the old Minolta X-7A out of storage and changed my major to Photography. 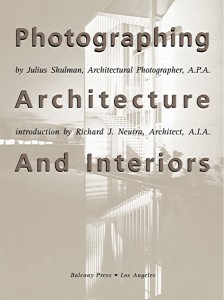 Shortly thereafter, I came across the 2000 re-issue of the 1962 book Photographing Architecture and Interiors by Julius Shulman.  Several knowledgeable and passionate teachers taught me the science of the camera and the art of printmaking, but it was Shulman who taught me about composition, and that the dedication of time can bring clarity of vision.

“All photography is a matter of timing.” – JS

People might assume architectural photography is easy because the subject doesn’t move, but as Julius pointed out, “The subject is moving because the earth is rotating, and we must carefully observe the position of the sun.”  The best shot of a building requires working with Mother Nature, which requires patience, and sitting under a tree waiting for the perfect moment instilled in me a sense of peace, contentment and the supreme luxury of taking the time.  Shulman’s enduring adoration of nature was taught by example, and architectural photography is my form of meditation.

“As a part of our environment the design of buildings is of paramount importance. It affects the lives of all people at all times, physically, psychologically and sociologically.”  – JS

Shulman’s mission was to translate the 3D art of modernist architects into a 2-dimensional format that the layman could understand, admire and desire.  As he wrote in his book, “Although architectural photography can be defined as a physical recording of the image of design, the photographer can develop the ability to transcend the mere physical recording. The photograph can then become instrumental in evoking empathy with the design.  (It) enhances awareness of an already-familiar environment. It prepares for the actual experience of being at or in a building. It substitutes for the experience until it occurs, if it ever does.”   This is the guiding vision and mission of BELT.

Shulman wanted to convey the personal satisfaction felt by the owners of modern homes he photographed.  At times, he battled for his photos to show the comfort and pleasure of the designs, rather than the stark aestheticism preferred by some of his architect clients.  An architect designs, but we are the ones who live with them every day, and the emotions that a building conjures dictates its legacy, for better or worse.

“A façade or elevation of a building may be shown in any number of ways but it must be clearly understandable to the viewer of the photograph.” – JS 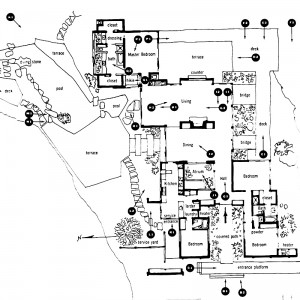 Shulman's map of a photo shoot from his book Photographing Architecture and Interiors.

In one remarkable chapter of his book, Shulman shows the interior and exterior plan of a home in Bel Air, California, annotated with the exact location and direction of his camera for the 33 shots he took of it for the July 1961 issue of House & Garden.  He then shows you all 33 photos and explains why he composed as he did, and the emphasis is always on making the house understandable to the layman.

You get a personal map of the artist visually stalking the project in a vaguely counter-clockwise direction.  Sometimes he shoots the same scene from opposite angles, while other times he shoots the same scene from different distances.  In a couple of cases, he merely moved the camera a few inches to the left of the previous shot, but there’s a vast difference in the message.

Multiple times throughout the book, he shows you his photographs of the same building from the same angle taken with different cameras, lenses, filters and time of day, and he explains the merits of each application and why the shot he ultimately chose was the best representation.  In a couple of cases, he even shows you the photo as it was shot compared to the tricks he employed in the darkroom to make it more dramatic.  He even illustrates how he employed a “portable garden” or a neighbor’s flower bed to add landscape drama to an otherwise-barren new home. 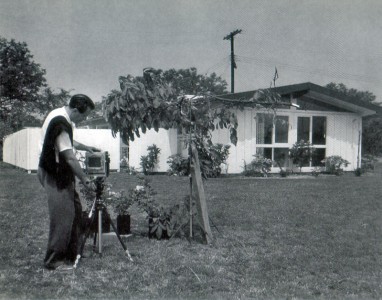 Shulman setting up a shot through his "portable garden." 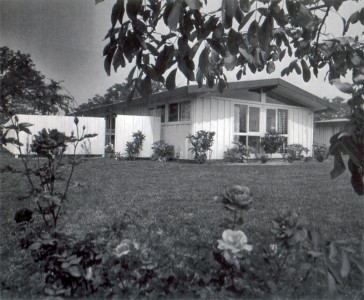 And the finished print.

Shulman’s complete honesty about how he achieved such successful results does not reduce the final impact, it merely reveals the generosity of his spirit and his unceasing need to educate and inspire others.  A true artist does not need to hide behind illusions of grandeur, because they know that even when giving you the exact recipe, results will vary, and this is the art of beauty and possibility.  I am grateful to Shulman for every personal and photographic adventure he’s led me to, and am comforted in knowing his work will continue to inspire so many others, forever and ever.

“Every man must make his contribution to society. The architectural photographer makes his by helping to improve the environment of his community.”  – JS 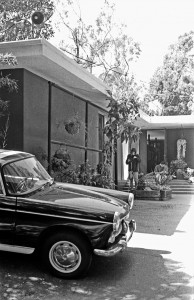 My friend David Laslie is a gifted architect and landscaper, and he kindly shares with us his  photographs of Julius Shulman’s home and personal memories of the man:

In the Spring of 1995, I was fresh to Los Angeles and a little more than impressionable.  Architect John Lautner had recently died and a tour was organized of some of his iconic homes in the Hollywood Hills.  At the end of the tour, there was the opportunity to meet Lautner’s biographer, Frank Escher, and purchase his book.  Two lines formed in a parking lot, filing toward two folding tables.  I knew the one line was for book purchases; what was the other line for?

I looked over at the other table and immediately recognized why the other line was so much longer than the one in which I stood.  Sitting at the table was a little old man with the biggest grin on his face, signing autographs, posing for pictures, and of course, telling stories.  It was Julius Shulman, and he was having the time of his life.  I was excited to buy the Lautner book and go to the end of the other line so I could get it signed by the great master whose photos told the story of John’s genius (his photos composed about 90% of the illustrations in the book).  By the time I got to the front of the line they had run out of books, so I was forced to settle for a rain check.  I did notice, however, that they were selling little postcards of Shulman images as well, so I bought one of the Malin house, (a.k.a. the “Chemosphere” ) and asked Julius to sign it.  He didn’t care if you bought the book vs. the postcard; I think he would have willingly signed on the back of your hand or your shirt tail, given the chance – anything to talk to one more person and to give a little bit more of himself.

Julius’ generosity is what I will remember most about him.  He would give generously – almost wastefully – of himself, and nothing made him happier than the opportunity to do so. His wife Olga was the same way.  Truly, they were one of the happiest couples I’ve ever known, and together the exuded love and generosity. 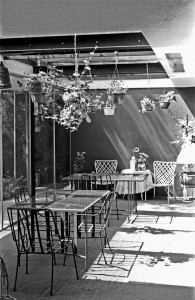 The patio of Shulman's home. Photo by David Laslie.

I had the pleasure of witnessing this on several occasions in the Spring of 1998.   While studying architecture at the University of Southern California, I had the opportunity to take an elective course in architectural photography taught by none other than Julius Shulman.  No one knew exactly how the class would work, as USC had never done anything like it before.  As we were participating in something new and different, perhaps even historically significant, I was asked by the dean to drag the school’s video camera to class every time and record each session for posterity.

Every Tuesday, we’d drive up the 101 into the Cahuenga pass and negotiate twisted Woodrow Wilson Drive up to Julius’ house.  I remember not being impressed by the house, designed by architect Raphael Soriano, and didn’t really buy Soriano’s explanation of how the subtleties in proportioning were meant to remind one of a Bach fugue.  When you first approach Julius’ house, it looks like an arrangement of two very plain boxes, but once you cross the threshold, however, you’ve entered Julius’ realm, a place of beauty, comfort, and light.  The studio was cluttered with matted photographs, some small as snapshots, others tall as a person.  There were no clear surfaces; walking into that studio was like walking into his mind.  This man had literally seen it all.

The rest of the home was nothing like the studio; it was immaculate.  Every object was arranged and ordered, but it was not a modern showcase, though.  There were no Barcelona chairs or Eileen Gray end tables.  The furniture was not there to reinforce the lines of the architecture, it was there to use. 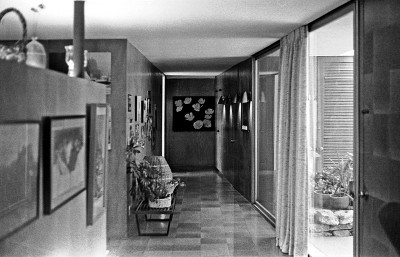 Julius told us a story about one of the fights he got into with architect Richard Neutra over furniture.  They arrived to photograph a home the architect had just completed, and Neutra was absolutely livid about the furniture the owners brought into the house.  He employed Shulman to help him take all of the owners’ furniture out of the house and replace it with modern designer furniture for the purpose of staging perfect photos.  They spent quite some time setting the scene and arranging things to Neutra’s satisfaction – simple, sparse, and modern.  When Neutra left, Shulman removed all the new furniture from the house and brought all the owners’ furniture back in and arranged it how it had been arranged previously.  Then he got his shots.  Neutra was supposedly quite pleased with the photos and didn’t realize that the furnishings were not those which he had brought in.

Julius taught us that our environments should be livable, and that this should be our primary concern, above clean lines and fugue-like proportions.  His photos exude a richness and fullness of life because that was more important to him than anything.  He said Soriano criticized him for having such a messy studio, and having such pedestrian furniture in his house, and for growing a jungle so thick it obscured the house.  But Julius pointed out that whatever you do, it should support quality of life.  If you are going to plant a garden, make it a jungle.  If you are going to furnish a home, make it comfortable.  If you are going to take a picture, make it alive. 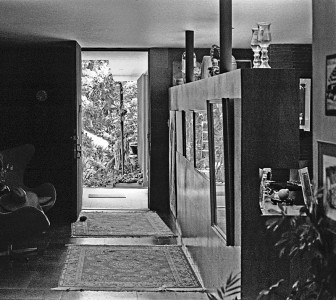 View to the front door of Shulman's home. Photo by David Laslie.

I think this desire for quality of life provided him with the perfect foundation upon which to build a generosity of spirit.  Because he made the effort, he was blessed with richness and fullness in abundance.  He was generous with himself, was rewarded by the fruits of that generosity, and was then able to give generously of himself to the world at large.