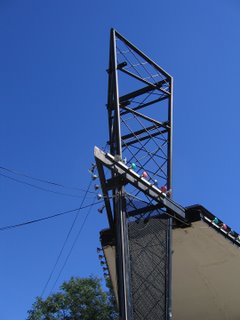 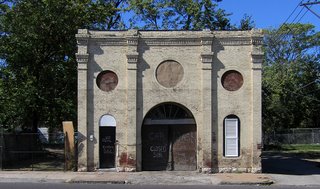 I was tooling down Vandeventer, and was captivated by the building, above (if anyone has info on it, please do share). Only when deciding to stop for more photos of it did I finally see what was across the street… 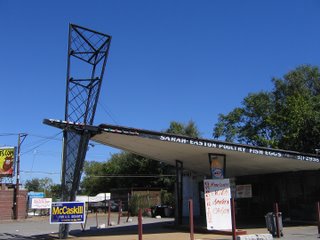 A previously unknown (to me) former Phillips 66, “bat wing” edition!!
The delight factor gets upped because it’s actually in use. Sure, it’s tricked out with all kinds of multi-colored lights and handmade plywood signs, but that proves its adaptability, and all the extra gewgaws don’t detract from the overall effect. 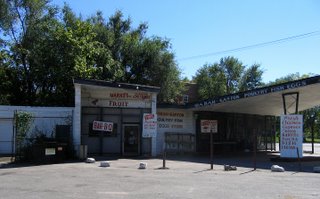 This Phillips 66 retains all of its original structure, doing business as Sarah Easton Poultry Fish & Egg Market. A small percentage of the avalanche of signage did tout the corner grocery aspect, but the main draw is food. Good-size lunch menu with BBQ, fresh coon and duck, “Fresh Fish, You Buy, We Fry” (click above photo to enlarge for details). What was once the car repair bay is now the take-out counter and kitchen. And there’s plenty of parking. 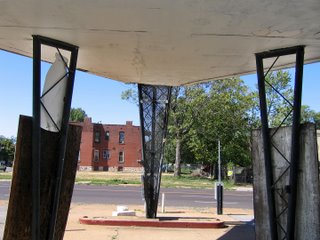 The majority of 66 Bat Wing’s still in use are in older, Blacker parts of town. There is one still in use as a car repair station at Chippewa & Mackland, in an older, Whiter part of South St. Louis. But the racial and financial politics of North City & County keeps the typical retail/residential developer from plowing everything over, thus allowing buildings like this to remain standing. And since they’re just standing there, why not use them?

I adore this organic form of “adaptive re-use.” It’s not planned, philosophized or politicized by university students and their professors in 100-page treatise that city planners will never bother to read. It just happens because everyone’s left alone to morph naturally. And a building previously designed in the late 1950s to purposely accommodate cars is still going to work in the 21st century, no matter what the new contents. Another case in point being… 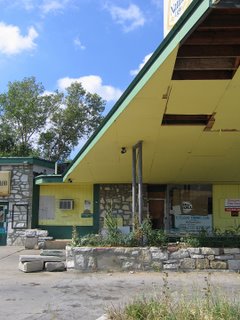 Missouri Avenue & 6th Street
East St. Louis, IL
This one is not a new find, just one that’s taken awhile to get proper photos of. And while waiting for that moment to happen, the place finally closed for good. 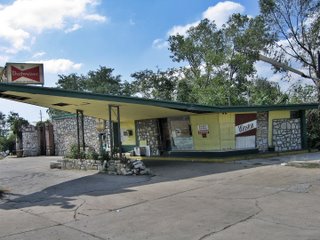 This Phillips 66 became a catch-all quick shop and liquor store, but the owner spent a lot of time personalizing the site. He turned the repair bays into retail space, covered the original concrete block with stone, created stone planters around the bases of the metal, lattice-work columns and formed an architectural salvage museum… 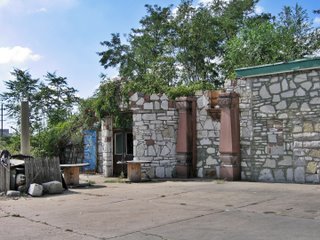 As nearby buildings were demolished, the owner snagged them for what had to be purely sentimental reasons. The red granite columns (above, center) came from the Tresh Neon Sign Co. building, while the rest of the pieces were taken from the former East St. Louis Public Library. Both buildings were within several blocks of the gas station, and torn down in the late 1980s. 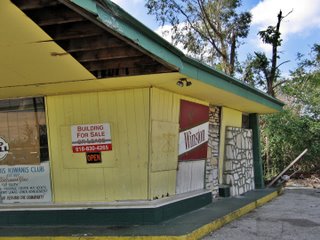 It’s assumed the owner has since died, which is why the place went from “For Sale Or Lease” to simply “For Sale” (above photo).

Odd Coincidence: Shortly after taking these East STL photos, I got an e-mail from a man near Kansas City, MO who had just seen my post about the Rockhill Double Bat Wings going down. Seems he’d love to buy one of these buildings to rehab and re-use. Did I know of any available?

It also reminded me of other readers’ comments that a Bat Wing would convert into a killer bicycle repair/sales shop or a hot dog stand. These uniquely shaped and detailed buildings do capture ones imagination, and the ones still working proves they’re easy to convert into whatever function you need it to serve. 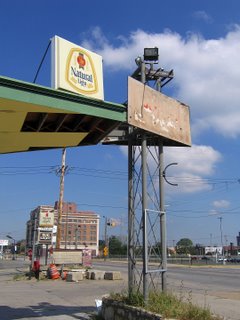