Below is a Living St. Louis piece about Pagedale, one of many inner-ring suburbs in St. Louis. Within, we learn that if you follow the subprime loans, you find the most foreclosures.

On the inspirational side, the ever-mounting number of empty homes in our inner-ring suburbs is a great opportunity for forward-thinking developers interested in the financial and societal advantage of re-using and improving our existing housing stock. As we hit rock bottom, this idea is not as much of a fantasy as previously believed. 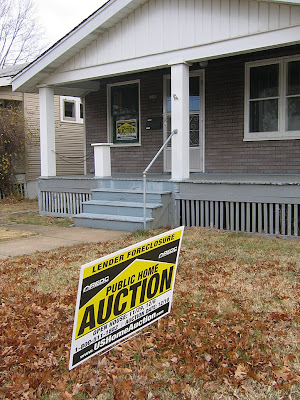 Watching neighbors move and public auction signs multiply is depressing and frustrating. But rather than sink further into feelings of helplessness, now is the time to think of solutions for the present and plan for the future. Optimism is the strongest ally of possibility.

A CHANGING LANDSCAPE
● Economic downturn is preservation’s best friend. When developers lose access to loans, they stop eyeing buildings for demolition. Right now, a threatened building is safely tucked away in a cedar chest under a layer of mothballs.

● Look around your neighborhoods and notice that the teardown pandemic has ground to a halt. There is no money or buyers for in-fill McMansions, so there’s no point in continuing this practice. This also means homeowners who have been willing to sell to new home builders now have to stay put and come back to good terms with a home that was perfectly fine before the allure of “easy” money.

● The energy crisis is organically leading us back to common sense. It now costs far too much to heat and cool a giant house, and do we properly utilize all those extra thousands of square footage in the first place? If the marketplace is an honest indicator, this bit of news from the Associated Press is encouraging:

Houses have been getting bigger fairly steadily since the Census Bureau began tracking the average size of new U.S. homes three decades ago. But now the economic downturn is likely to turn that trend around, says the Associated Press — particularly as production builders continue to scale back floor-plan sizes. After trimming some of its 3,400-square-foot homes to 2,400 square feet last year, for example, Los Angeles–based KB Home recently rolled out a new line of Southern California homes that start at 1,230 square feet and are priced at just over $200,000.

● The cost of living far away from business and retail centers is also taking a toll. Everyone is now acutely aware of how much it costs to drive, and many have voluntarily found ways to reduce that cost. A Center for Neighborhood Technology report shows that people who live in cities and inner ring suburbs spend up to $2,100 less annually on gasoline than residents of outer ring suburbs, who can easily average $4,000 a year on gasoline, alone.

REVERSE IS NOT NECESSARILY NEGATIVE
Today’s economic downturn puts many of us in the position of going backwards. When we have to give up the large house that’s an 80-mile round trip from work, it can feel like a failure. But for those who have survived being unemployed or broke, we often learn that less quantity can improve the quality of daily life.

Being forced to give things up never feels right, but in the long run, accepting the way things are generally works better than fighting for the way we think it should be. Americans have become adverse to the concept of sacrifice, as if it compromises what we’re entitled to. But we now have solid proof that so much of our entitlement was based on shady credit practices, and there really was no there there.

So, how do we turn lemons into lemonade? We can look backwards to where we originally came from – the city centers and their inner-ring suburbs – and explore the opportunities they present.

REMODEL THE PAST FOR A BETTER FUTURE
The empty houses in the city of St. Louis and the original suburbs that surround it are the key to living smarter. All amenities, utilities and infrastructure are already in place and can easily be reshaped to meet our current standards of living. The daily awareness and acceptance of green living now pairs perfectly with financial downturn, and solutions that can benefit us all are right under our noses.

The greenest buildings are the ones already standing, and retrofitting an older home for energy efficiency is quickly becoming a remodeling industry standard, which means demand reduces the price of doing so. Plus, the state of Missouri is continuing energy efficient tax credits for homes and businesses in 2009. Couple that with the promise of an energy-conscious president, and more tax breaks and incentives for retrofitting existing older homes becomes a real, national possibility.

Statewide, imagine the positive financial growth that can happen by encouraging people to move back in and remodel existing homes, businesses and retail. There is little debate that historic tax credits are the primary catalyst for the revival of downtown St. Louis; expanding this concept to help private homeowners and small businesses benefits everyone. For instance, sizable pockets of South St. Louis have been revived by recent immigrants buying and remodeling existing storefronts; drive through the now-bustling Bevo Mill area for tangible proof that what once was is also what can be. These Eastern Europeans instinctively understand the thrift of reviving existing density through sweat equity and old-fashioned loans. Throw in usable tax incentives and credits, and we natives can do it, too.

We can no longer afford to keep reinventing the wheel, especially when the basic concept of the wheel is what made civilized progress possible. If we view a 1,200 s.f. house in Ferguson through the lens of a McMansion, it’s a downwardly mobile downgrade. But if we look at it through the lens of possibility – reconfiguring floorplans, building additions, energy retrofitting – it becomes a potentially rewarding endeavor.

Even without state or national government intervention, we are already learning (or is that re-learning?) how to better use our resources. We don’t really have much say in the matter, and the survival instinct serves us well. We are constantly being told that things will get much worse before they get better, and this is true. Part of “much worse” is the honest threat of losing what we currently have. But the options we have ahead of us need not be a consolation prize. We have already begun the process of retrofitting our lives, and if all levels of government could work with us on retrofitting our built environment, the opportunity to apply ingenuity and responsibility can create future gains from our current losses. 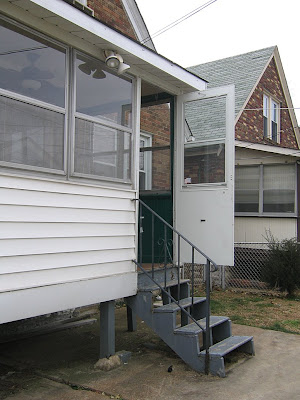 AN IMMEDIATE CALL TO ACTION
Each new empty house on your block is cause for worry: down goes property values, up goes the potential for crime. The bank that foreclosed on that home is not your new neighbor; they are your new problem.

We often have a tendency to not want to get involved: it’s their problem, not mine. But when there is no there there, it’s in your best interest to get involved. It may not be possible now, but in the future, someone can buy the house next to you if it has been protected. So, protect your investment, your block and your neighborhood with a little extra effort.

Please keep an eye on the newly empty houses on your block. Act as if they are on a long vacation and make the effort to clear up any obvious signs of abandonment: phone books on the porch, newspapers in the yard, etc. If a sunporch door is flapping in the wind, try to secure it. Try to turn off any neon signs advertising the house as a sitting duck. If this is more than you can or will do, then please let someone else know so they can take care of it.

Contact the Citizens Service Bureau about any problems with a vacant house. Let them do the research and enact the solution; that’s what they are here for. Call 314.622.4800, or online at this link. It is easy, painless and gets results.

There are two key factors that turn a block bad: fear and apathy. We tend to apply this to new and unusual additions, but it applies double to this new wave of subtractions on our blocks. A foreclosure devastates the family it happened to and reverberates out to the neighbors who remain. You can ease this sense of helplessness, and pay it forward, by helping out now with a little bravery and concern. Please.