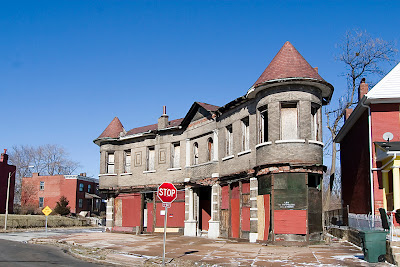 Fountain Park Neighborhood
North St. Louis, MO
Some residential business brought me to this neighborhood for the first time, and I was enchanted. Even on a snowy, bitterly cold day I could imagine the beauty of the park during spring and summer, and the houses ringing it have a stately charm. Then I saw the building, above. 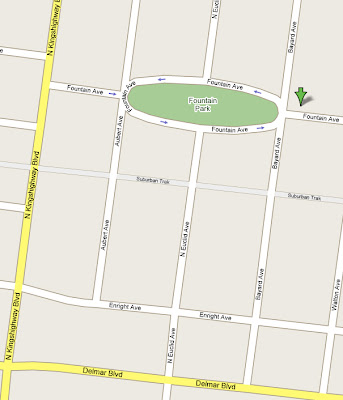 There’s an historic church from 1895 at the southwestern edge of the oval, the rest is single and multi-family residential, save for this mixed-use structure at the northeastern edge. 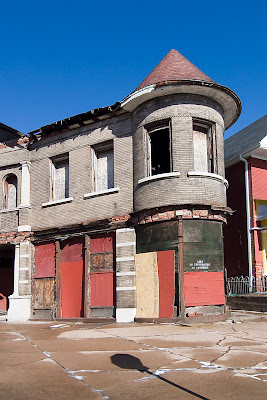 It was built in 1897, with store fronts at ground level and apartments above. The building curves to match the geometry of the neighborhood, and the cylindrical turrets are like lyrical bookends. I immediately imagined decades of people lounging in these spaces, gazing out over the park, and it felt magical. 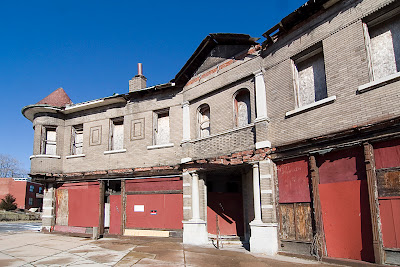 The building is certainly not in the best shape. Scavengers have carted off most all the valuable pieces from ground level, and severe water damage is evident. But the building is far from down for the count, so I checked into its status.

City records show that it may have been vacant since 1989, and that the Citizen’s Service Bureau received 6 complaints on the building between June 2005 and November 2006, mostly about the vacant building being unsecured. The easy assumption is that the immediate neighbors keep an eye on it, and won’t tolerate any nonsense. 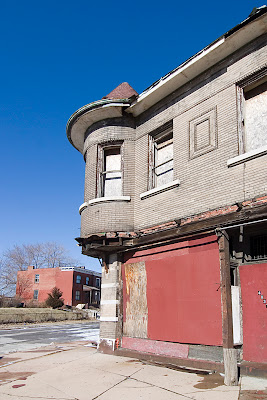 Exact sales information for the building is unavailable, but it is now owned by Titsworth Properties, LLC, out of downtown Clayton, and I get the impression from past permit applications that their ownership is fairly recent.

But the most curious part is that building was first condemned to be demolished in November 1996, and a new demo permit was issued in September of 2006. Which has me curious about:
Exactly how do demolition permits work?
Why did Titsworth buy a building that was to be demolished?
If it does finally go down, what will go in its place?

A 1979 survey tags the building as having “state significance,” and there’s no denying it’s an important – and gorgeous – part of the neighborhood. Whatever would replace it would surely be out of place with the rest of the area. Or even worse, it would just remain a blank hole in a neighborhood that has worked hard to retain most all of its original fabric.

I long to know about the history of this building and what’s planned for it in the present and future. If you have any of the information, please do share, and keep your fingers crossed that some kind of miracle keeps it standing with intent to thrive.