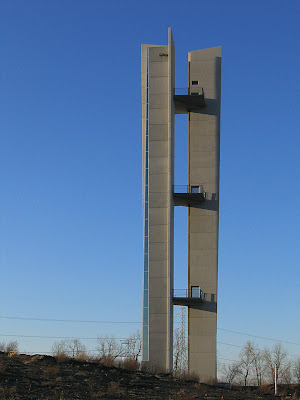 Route 3 through Hartford, IL
Near the end of a Christmas visit in Brighton, Il, my father suggested that since the McKinley Bridge is now open, I should take Route 3 to the refurbished bridge, cutting my travel time to south St. Louis by 20 minutes. I took the route, but wound up adding that 20 minutes back on when I saw a strange sight in the distance. Route 3 through East Alton and Hartford is a tad bedraggled and flat, but up on the right, I saw this shadowy sliver shooting up into the sky. Driving nearer, it kept changing shape, from a tower to an “H” to a twisted rod. What in the hell is this fabulous thing?!

An illegal U-turn at the next light took me back to signage welcoming the Lewis & Clark Memorial Tower. It is a 190-foot tall viewing tower overlooking the confluence of the Mississippi and Missouri Rivers. It was designed and overseen by Kennedy Associates, Inc in downtown St. Louis, who have an appropriately poetic explanation for its shape. But before learning all this afterwards, I was simply intrigued with its morphing simplicity.

I was so entranced that I jumped out into bitterly biting winter winds to take a few pictures. It reminds me of the Arch in the way that it is such a simple geometry, but with every inch you and the sun move, it shows a new face, each new face as compelling as the last one. And like the Arch, I want up in that thing, ASAP! Unlike the Arch, you’ll be able to walk out into the roaring winds…but only when it’s much warmer. I about got frostbite, so had to leave. 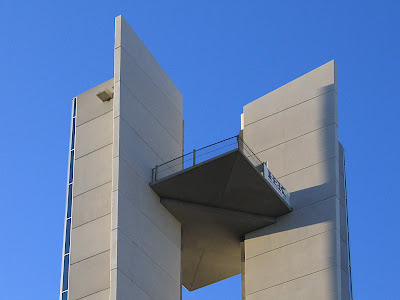 This memorial was supposed to commemorate the 2006 bicentennial of Lewis & Clark, but they obviously missed that anniversary. To the layman, it looks like they’re done with major construction on the towers, so maybe it can open by spring 2008? But even without being able to go up in it, it is worth a drive across the McKinley just to see it for yourself. You don’t need any further directions because you can’t miss it. Yet it’s not garish or embarrassing. This is a rather impressive new monument to add to our bi-state area.