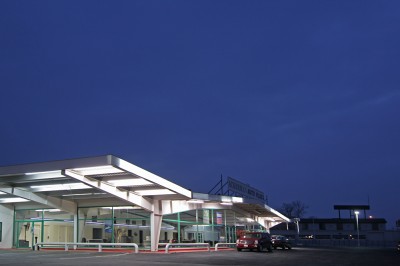 I previously covered Ackerman Buick, and the short post brought on some great comments, including:
It’s kinda depressing now, but I can remember when that was the most energetic, happening intersection in North County. Maybe, someday, it will come back…I hope so…

The above photo was taken the day after Thanksgiving 2009. I made the trek back out because after having been dark for a spell, the lights were back on with cars for sale in the lot, and and an Ackerman sign was back up when it had been gone for several years. 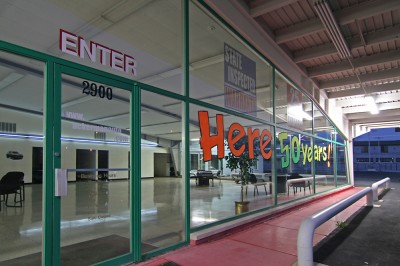 And across the window they declared in huge, bright letters: Here 50 Years!  Now, these weren’t 50 continuous years; owner Jerry Ackerman sold the franchise to Behlman in 2006, and in 2007 it became a Hyundai franchise, which is when they took down the gigantic lighted letters that spelled “Buick.” That right there was the end of an era, but at least the complex was still open. Then it went dark and empty. 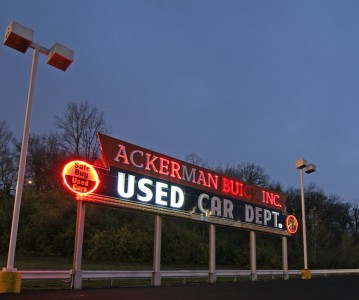 So seeing the lights back on and a temporary Ackerman sign going up on the building was a thrill. The original owners were returning, and crowing about it: Here 50 Years! That kind of pride of place is rare in the retail world.

And suddenly, the old neon sign (above) was relevant once again! They still had the same phone number, they had used cars, everything was returning to the way it had once been. How does something like this happen in today’s world? I was not ashamed to have tears of happiness in my eyes as I stared up at the flickering neon roaring through the glass tubes once again. 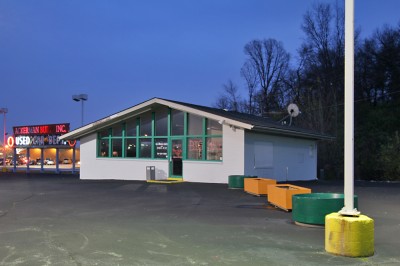 Jerry Ackerman bought out Kuhs Buick, which was on North Grand, and in the early 1960s he uprooted that neon sign and brought it out to burgeoning North County. The little building above was the first new structure to go up on the property in 1964.  The winged, main building went up in 1965. 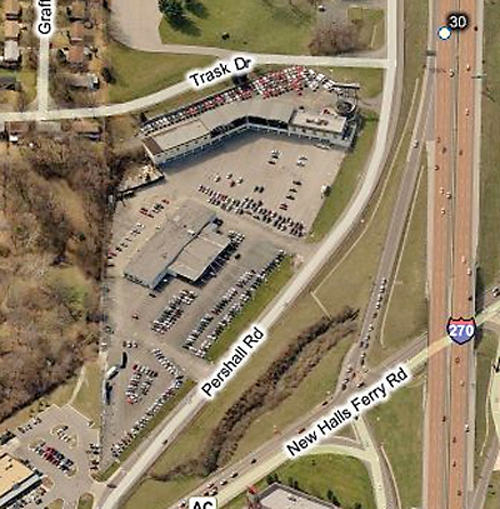 They eventually had over 9 acres, sloping up toward West Florissant, along the Hwy 270 service road. As you can see from the aerial map above, it was not only an auto complex, but an entire village! I never bought a car from there, never even stepped on the lot until 2003 to take photos, but this town within a town aspect always fascinated me. You could watch the complex unfold as you tooled down the highway; the sign next to the round building at the top of the hill was always flashing come-ons; it was a spiritual epicenter for a happening part of a Baby Boom suburban town, straddling the lines between Dellwood, Ferguson and Florissant. 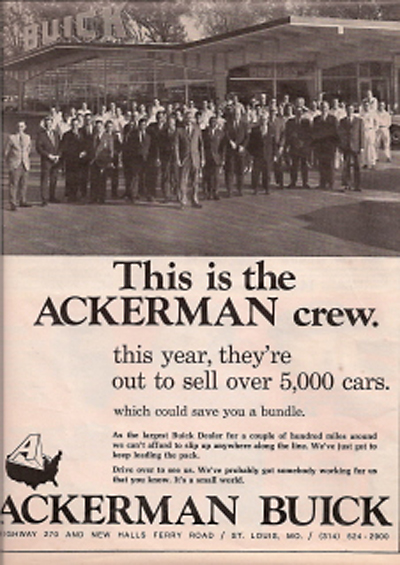 This ad from a 1969 issue of Look magazine was passed to me by a 25-year Ackerman Buick employee, Tim Von Cloedt. I made his cyber acquaintance when he commented on the May 2009 B.E.L.T. post about the place.  He grew up in the neighborhood directly behind the complex,  riding his bike through the lot as a boy, and eventually coming to work there. He has supplied much of the historical information herein, and major thanks to him for helping to create this mini-memorial. 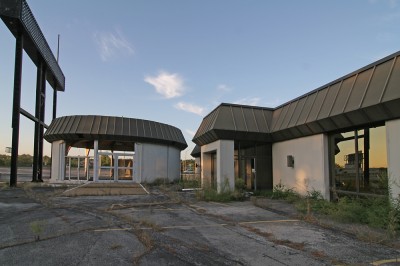 While talking about the sad, run-down state of the now-vacant Ackerman at a family dinner, my cousin Kathy revealed that she had almost been arrested on her high school graduation night in 1973 for drunkenly trying to climb the elephant on their lot.  Ackerman bought the fake elephant – bolted to a small trailer so it could be tooled around the lot – when Buick was selling Opels, and it was huge and iconic in the area. My cousin only made it halfway up when a cop put a stop to it. That elephant now resides at a golf range owned by a former used car salesman at 370 and Missouri Bottoms. 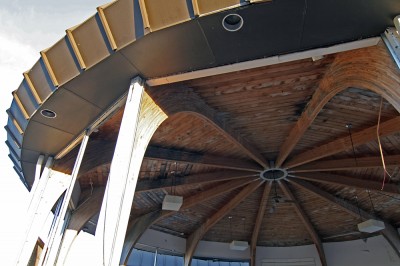 The round showcase building at the top of the hill housed many different Ackerman-owned business over the years, including GMC motor homes, Chris-Craft boats, Mitsubishi and Hyundai. 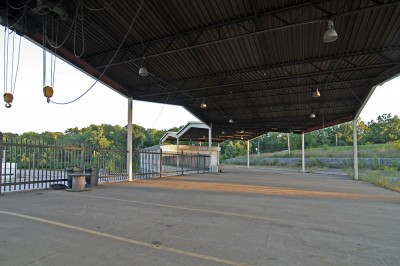 Curving off the round building is this folded, metal promenade that led to the parts department. This is a two-story structure tucked into the hill, and is the eastern boundary of the property, serving as a fortress wall. I used to wonder how many times a day employees had to make the trek from up here down to the main building and how many calories did that burn? 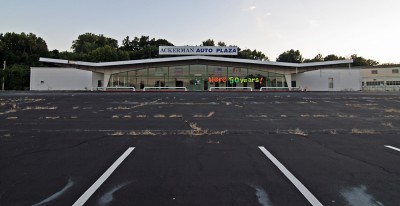 Jerry Ackerman gave it another try at this location, which was when the lights came back on, and the Here 50 Years! declaration was made. But a deal went bad and it went dark again. Come Labor Day 2010 (above) weeds were growing up through the once-immaculate blacktop, fascia was falling off the water-logged building, and vandals had been riding roughshod. It was just sad to pass by a place that was once so vibrant with activity now so still and forlorn. And what do you do with such a huge swath of property that was always devoted to motor vehicles? 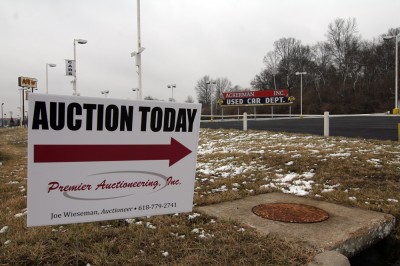 On February 26, 2011 they held a public auction for the contents of the buildings. It was a bitterly cold, damp and grey day, but it was nice to see vehicles all over the lot one last time, and tons of people (mostly men) milling about the place, buying up a wide array of items. 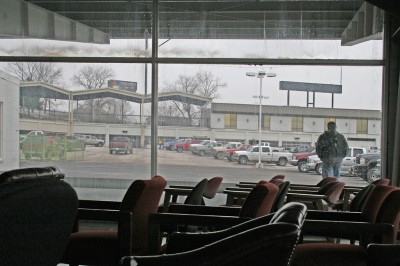 After all these years, I finally made it inside the winged building! But the water damage was so bad that it was hard to breathe from all the mold, so even though it was warmer in there than outside, I had to vacate. 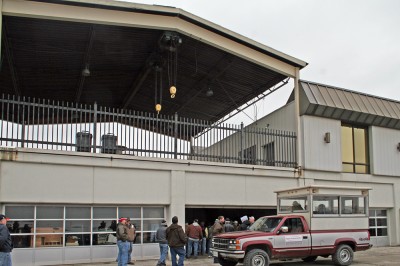 Most of the auction lots were inside the former service department. Lots of auto repair equipment, to be sure, but also decades worth of furniture and… 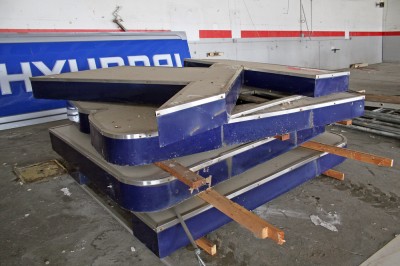 …the lighted Buick letters! These sold for $300, and this is why you should never throw anything away. I do hope someone bought the original Ackerman neon sign. And there was one item for sale that nearly broke my heart: 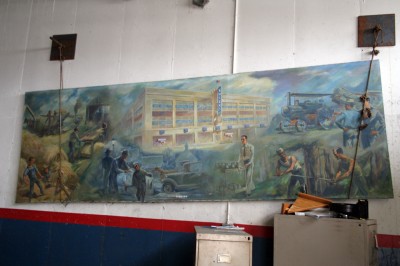 This large painting is signed “Charles Morgenhaler, 1949,” and shows the Kuhs Auto building on North Grand, the dealership Jerry Ackerman bought out. At the bottom middle, in white paint is “1.30.64.” It looks as if this is when the painting was altered to Ackerman Buick on the building’s neon marquee and windows. Meaning, Ackerman inherited the painting and altered it, then took it with him out to North County. And after all of these generations of history unfolding, it now hung in the last stall of the service bay, soaking up the damp, waiting for its next home.

I hope someone bought it. Or that Jerry or his son took it home as a keepsake.

The main building is scheduled to come down any day now, with the rest of the buildings right behind it. By the end of March 2011, it will be vacant land, which is for sale. Maybe it’s better to have the vacant land than to have the once mighty Ackerman Buick sit there decaying, reminding everyone of glory days that passed by in 50 years, then gone. 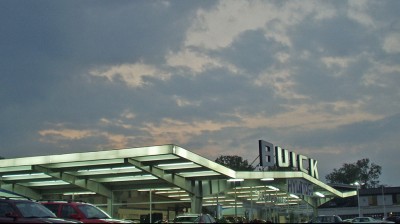 UPDATE
Readers have asked exactly where the original Kuhs Buick was on North Grand. Thank you Larry Giles for filling us in. Click this link to see it on Google maps. 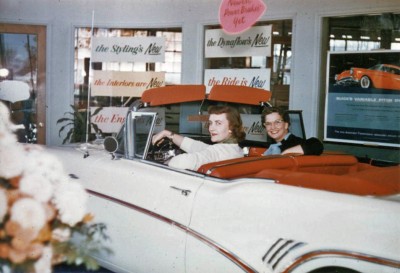 Larry also shared this photo of his mother Beverly Giles (passenger side) inside the Kuhs showroom, where she was the office manager in the late 1950s.

I’ve also been told that the mayor of Ferguson had yet to receive a demolition permit for the Ackerman site, so maybe those buildings aren’t coming down so quickly? Let’s cross our fingers and hope it’s true!

DEMOLITION UPDATE
The building was taken down in one day on August 15, 2011. Video footage here.