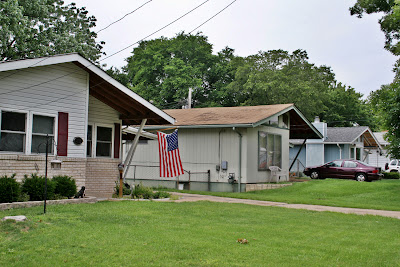 I was pedaling around a previously-unexplored section of South St. Louis, the very hilly part wedged in the area between Highway 55 and the St. Louis County line. A majority of the homes near the City/County border are the quickly-erected, simple tract homes necessitated by the baby boom. Sprinkled among them are 1920s & 30s brick bungalows, and a couple of much older homes in the “farm mansion” style.

I pedaled up Waddell, and on my right I saw a line of 5 houses that stuck out like a white rose in a red rose bouquet (see photo above). Simple, square homes with an abundance of glass and carports providing a sense of sweeping asymmetry. A glance down Comstock revealed an even longer line of the same houses. A pedal down the street revealed two courts full of variations on this theme! 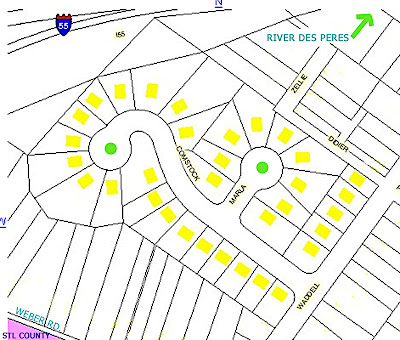 As I stood at the entrance to Marla Court (map, above), memories of Darla Court rushed forth; Darla Court being a Jetsons duplex village I accidentally discovered in the bowels of Jennings, MO. Darla in the North… Marla in the South… freaking out, in a good way. 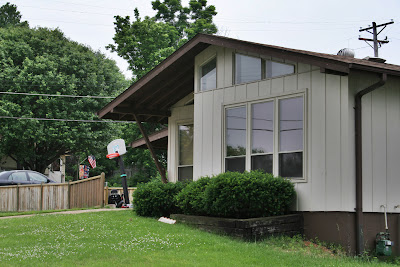 Above is a good example of a relatively untouched version of the homes in this little mid-century pocket. All of the homes in this style were built between 1957 and 1958. Each one was originally 952 square feet with one bathroom and central air. These small homes were given a bit of modern drama by treating the standard-height front rooms to 5 transom windows following the slope of the roof line. The steel tubes supporting the roof overhang and carport are placed at the jaunty angles which separated modern from traditional. 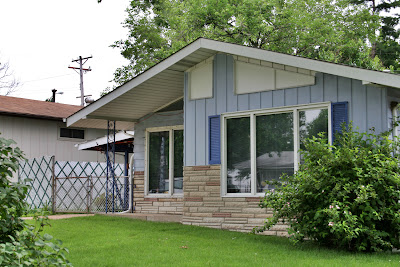 This being South St. Louis, tinkering with our homes is a pre-requisite, so of course there is some remodeling. “Stone” siding and shutters were an original cosmetic variation on the theme, while the boarding up of the transom windows and the curly-cue iron columns (above) feels like a form of beating back some of the peskier modern features. 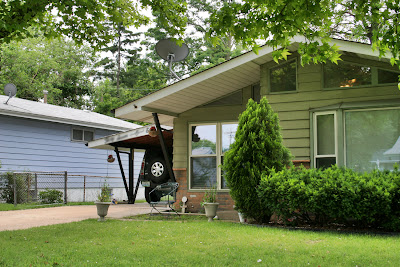 Most of the homes have opted to cover the wood roof soffits with vinyl, which is a normal function of upkeep. But I was charmed by how most everyone kept the wide variety of colors when it came time to replace the siding (above).

All of the houses were the same, yet there is just enough original – and new – detail to make each one interesting in its own right. I was also pleased to see every home occupied and in pristine condition, with neighbors of all ages playing in the street and puttering around the yards. I wonder if being part of a slightly secluded neighborhood of similar houses contributes to the distinct community feel. 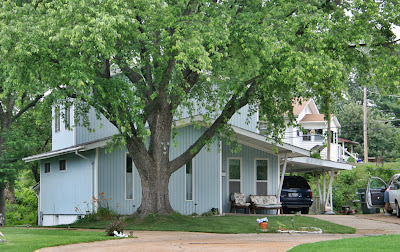 Check out the above drastic remodel. Not only did they change the orientation of the siding and the windows from horizontal to vertical, they also added a second story. I love that they went for such radical departures while still honoring the basic lines of the house, and thus the neighborhood. Also, it’s a bit shocking that they are the only house to add a 2nd story in order to gain some square footage. 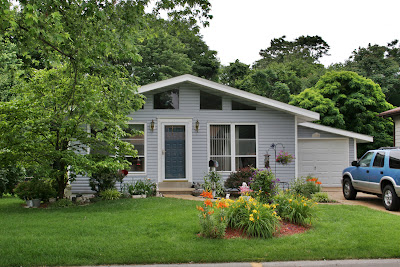 In the court part of Comstock comes a variation on the basic architectural theme, what I refer to as the Flat Front Model. These homes went in later, from 1961 – 1965, and were slightly larger at 988 square feet and with 2 bathrooms. There was one of these models for sale at the time I took these pictures, and according to the realty listing, that house added a great room to the backside for more square footage, while leaving the front relatively untouched. It had a list price of $149,900. 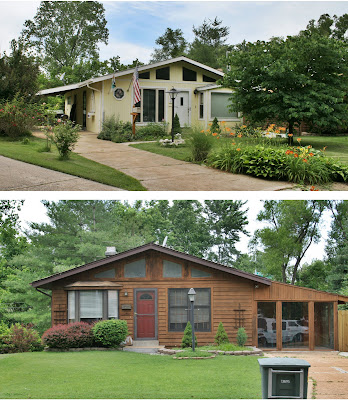 The Flat Fronts are riper for renovation, with most of them converting carports into garages. Or in the case of the home directly above, the carport became a sunroom, and everything gets a rustic look with cedar siding. But in general, I am impressed with how much of the original stylistic intent remains among all the remodeling; it’s a testament to the flexibility of these homes that so much D.I.Y. can occur without altering the basic flavor of this one-off development. 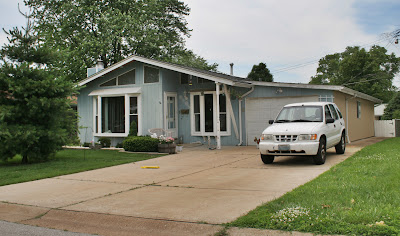