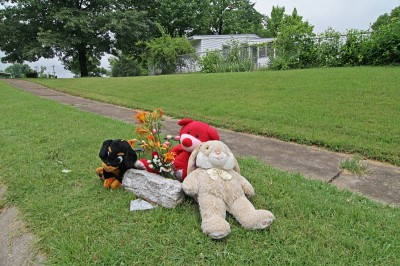 The headline on July 4, 2009 read, “14-year old shot and killed in Jennings.” The second paragraph reported that it happened in the 2800 block of Meadowlark, and my heart sank. It’s too sad for comprehension when a young boy is riddled full of drive-by bullets. That I intimately know the street where he took his last steps kept haunting me.

So I had to take a drive to the old neighborhood; I needed to know where it happened. It was easy to spot the memorial at the bottom of the steep hill on Meadowlark. The stuffed animals underscored just how young he was. I saw ghost images of my kid-self walking past that spot hundreds of times, right past the house of the neighbor lady who ran out to administer CPR to the boy as he died. Tears welled up, and I got lost in remembering Meadowlark. 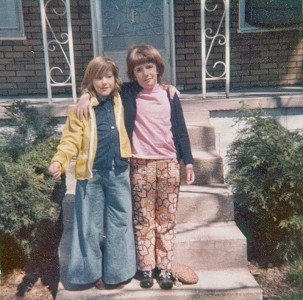 I was born one street south of Meadowlark, and when maternity leave was up, my mother had to find a babysitter. A neighbor said a woman on Meadowlark babysat in her home, and to give her a call. So my mother called Mildred Conine, who told her that she had recently stopped with full-time babysitting. My mother was desperate, and asked if Mildred could just watch me for a week while searching for another solution, and she agreed. After one week of taking care of me, she told my mother she would take the full time gig because I was such a quiet and sweet baby. Conine (I called her that because I couldn’t master the first name) and I were together for 12 years. She saw me take my first steps. She was my Other Mother.

The picture above is from May 1973. That’s me on the left, with Conine’s step-grandaughter, Debbie, on the front porch of her home at 2845 Meadowlark. The house was 600 square feet, built in 1939, with a full basement, a detahced garage that always smelled of the sawdust her husband Ray created, and a gloriously huge backyard for 2 dogs and a most wonderous vegetable garden.

I think about that house as much as I do Conine. After my parents divorced in 1973, she and the house were the only sense of normal I had left. It was a safe and happy place offering up endless adventure. 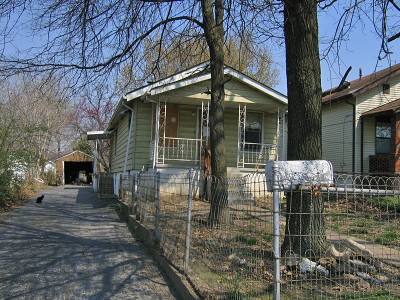 The last time I visited with her was Christmas 1978. Then puberty came and my life went selfishly beserk, as teenage girls usually go. Conine died in 1988, Ray a few years after that. Over the years, I kept regular tabs on the house, noticing when the asbestos shingles were covered with vinyl, and that the garage was starting to cave in on itself. But everything else about it – and the street – was still so much the same that it was always a special “return to those thrilling days of yesteryear.” Always a treat until… 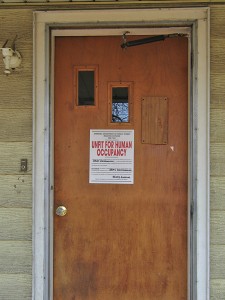 …the spring of 2005, when I found boards on the windows and a condemnation notice on the front door. I stood on the front porch and broke into hard, devastated tears. 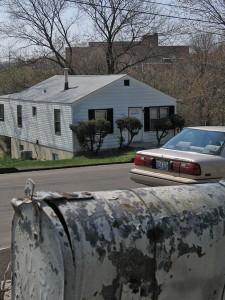 The picture above is a view from Conine’s front porch. That large building in the distance is Northland Shopping Center. Conine (who never had a driver’s license) and I knew about 7 different routes to walk to Northland, and did so at least twice a week. We’d see $1 movies, get groceries at Schnucks and each trip usually included a stop in at Kresges, where the toy aisles babysat me while Conine shopped. Conine and Northland are forever linked in my sense memory.

And in the spring of 2005, crews had begun swinging the wrecking balls and dismantling Northland, which was already disturbing me. Then to swing by here and see Conine’s house vacated and condemned? It was too symbolic, too unfair and hurt deeply. So I just sat on the porch and cried for the past, the present and no future.

Northland disappeared, but Conine’s house got a reprieve. Someone bought it, fixed it up and sold it! It’s still occupied to this day. That was an optimistic turn of events for 2845 Meadowlark. But over the following years I’ve noticed something odd about this block.

On the map above, “A” marks the spot of the memorial, “B” is the Conine house and the blue outline highlights all the houses on the opposite side of the street that are now vacant and condemned. In 2006, only one house was empty, and since Conine’s place got a second chance, I figured so would the one across the street. But as of July 4, 2009, 8 houses in a row are dead. 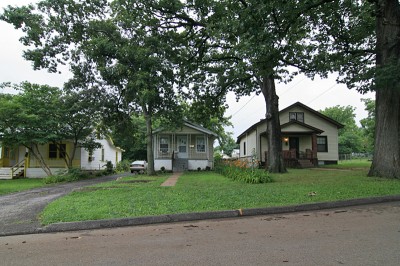 While Conine’s side of the street (above) is intact and occupied, the other side is an overgrown, sad mess of decay. It’s the kind of mass decay that breeds trouble and makes uneasy neighbors. The news will probably not follow up on why the 14-year old was gunned down in a drive-by, but certain assumptions can be made when you see desolation row across the street. It happens all too often, and it will never not hurt for the people who once lived there, and the people who live there now.

I got back in my car and sadly, slowly drove up the street, seeing both the past and the present. And then why this death was bothering me so finally hit me: A young life was violently stamped out and he was the symbol of the present state of this block. He has no future. Does Meadowlark?

UPDATE
Follow-up information about the shooting.