Even though the Preservation Board voted on June 22, 2009 to allow for demolition of the San Luis, the story has a few more chapters to be written.

The 20 people who testified against the surface parking lot proposal (of which I was one) were armed with facts, figures and sound rationales to demonstrate why the proposal was unsound or should be reconsidered.  According to the by-laws of the Preservation Board, we had every reason to believe we were systematically following the rules that allowed for public discourse and debate so that the Board could make an informed decision based on the facts of the case as well as the greater good of the neighborhood and the City of St. Louis.

We followed procedures even though Alderwoman Lyda Krewson had been graciously candid in telling some of us before the event that the outcome was a done deal.  Considering the difficult position she had been put in over this issue, it was considered one of two things:  a desire to be finished with this complicated topic or a poker player’s bluff.  Either way, we followed through according to the system set in place by our City.

Ald. Krewson was granted the final testimony of the night, and she acknowledged the struggles she had (a parking lot is not the best and highest use of this property) with her ultimate decision to side with the property owners.  She said her final decision was based on these facts:  The property owners could not feasibly rehab the building, would not sell the property to someone else and needed the parking.

Only 5 of the 9 Preservation Board members were in attendance.  Alderwoman Phyllis Young cited the same reasons as Krewson for her “yes” vote.  Board member David Richardson acknowledged the merits of all arguments, but wanted to fairly follow the “letter of the law” about an ordinance written in 1974 (while acknowledging that this ordinance needs to be revised to current standards) as his reason for a “yes” vote.   The tie-breaking vote came from Richard Callow, who contributed no explanation for his “yes.”

My immediate thoughts were of aldermanic courtesy in play and that the property owner had been granted the right to do as they saw fit with their property.   On the surface, fair enough.  But this “property rights” decision did not jibe with previous decisions by the city.

First to come to mind was the Loughborough Commons issue, wherein the majority of property owners on S. Grand Avenue  did NOT want to give up their property for a retail development, but were overruled by Eminent Domain.  I’m sure any of you can cite another fast dozen cases of property owner rights being overturned for a special interest.  And this line of thought was a contributing factor to the lingering feeling that “the fix was in.”

In the hours and days after the decision, there is much investigation into any procedural and/or legal improprieties and inconsistencies that may exist around this issue, and we will continue to follow the letter of the law in appealing this case.  But there is no escaping the white elephant in the room:  the truism of St. Louis politics is that it’s all about WHO the property owner is and how they benefit the people in power.

City of St. Louis Citizens vs. Their Politicians

There is a distressing disconnect between the citizens of St. Louis City and their elected officials over what is best for renewing and revitalizing this city.

(This irony must be noted: on the very same night as the San Luis issue, the citizens of Ballwin experienced the exact same disconnect with their elected officials over the Schnucks issue, so this problem is not exclusive to the City.)

As we have been taught – and as state and federal laws clearly state – one must participate in the democratic process in order for it to work.  Or as it is plainly stated by the man on the street:  if you don’t vote then don’t complain.  But from the bubble-burst of the Nixon presidency on down, citizens are personally discouraged by political deviation from the stated will of the people.  Examples off the top of my head:  the voters of Missouri had twice voted down legalized gambling and concealed firearms, and how did these issues end?  So, when the people have spoke but the politicians are ignoring them, there’s no denying that other factors beyond democracy are in play.

Nationally, this unease with political disconnect resulted in a majority vote for “change we can believe in.”  As with so many matters, the City of St. Louis is decades behind the curve, but this has not completely discouraged the 355,000+ people who purposely choose to live here because they know the advantages of living here and believe in its potential.

To remain concentrated on the San Luis issue, I will set aside many other glaring examples of disconnect between our citizens and politicians.  When it comes to matters of city planning and development – two issues that ultimately affect every taxpaying citizen in tangible ways – there are thousands of citizens who actively work through multiple channels to contribute to the improvement and stewardship of St. Louis.  That the city needs improving has been absolutely acknowledged by both the citizens and City Hall, but how to do this creates continual discussion.

Ideally, I should have been able to say “this creates continual DEBATE,” but that’s not how it actually plays out.  All too often, it’s a case of concerned citizens flapping their jaws into a vortex of silence.

Come election time, our politicians want us to be engaged, and cite this engagement as one of the reasons they are so proud to represent and fight for this city.  But once we’ve voted them into office, the party line is disconnected.  Even though they take our calls and read our letters, they don’t seem to comprehend what we’re saying.

When it comes to planning and development issues, St. Louis City advocates are very clear and concise about the What and Why.  We are overly detailed about documenting, educating and debating why we are for or against any given issue.  That so many people continually join in these discussions and take action through the proper channels underscores how important these issues are.  It is heartening and inspiring to know that St. Louisans care this deeply for their city.

And in exchange for all this public discourse that is closely monitored by City Hall, we get… silence.  Or even more maddening, we get responses that tend towards “Citizens Against Virtually Everything,” or something to the effect that we just don’t understand what is needed to elevate the prospects and standing of this city.

If our politicians truly believe we don’t get it, then respect us enough to EXPLAIN your decisions.  We taxpaying and voting citizens may not fully understand the stresses and complexities of the issues you deal with, so tell us.  We assume you do not make any of these decisions lightly, so share with us the processes that went into the final decisions.  We may not like the outcomes, but the truth is ultimately easier to deal with than confusion or collusion.

And collusion is the natural conclusion we come to when you refuse to educate on or include us in the decisions that impact our lives and the prospects of this city.

Do not dismiss this as emotional, knee-jerk reactions; the stereotype of “backroom St. Louis politics” persists because of documented history of its existence, and because of the continual reticence to change this way of doing business.   This is a “big small town” and everyone knows everyone’s business.  The tension comes from those who work within the shadow system vs. those who engage in an open and public manner as prescribed by the written laws.

It is true that if one wishes to reform the system, they must work to change it from the ground up.  New generations of passionate, educated and informed citizens are already doing so, and you can safely bet on greater numbers of them relying on existing laws and engagement of the citizens as a means for steering the City of St. Louis into the realities and possibilities of the 21st century.

When it comes to St. Louis City planning and development, of our politicians and representatives I ask these questions:

Of our St. Louis City residents I ask these questions:

To stay current on the San Luis issue, bookmark No Parking Lot On Lindell. 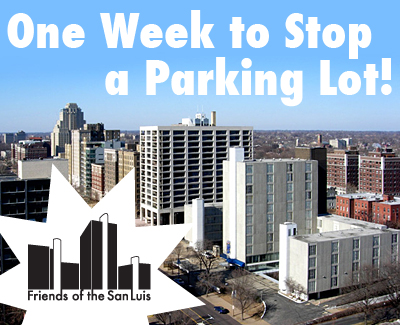 On Monday, June 22, a demolition permit for the San Luis goes up for review before the St. Louis Preservation Board.  The owners want to demolish the building at Lindell & Taylor in the Central West End for a surface parking lot.

If this doesn’t sit right with you, we need you to speak up.
Here’s your options:

E-mail the Preservation Board now

E-mail Lyda Krewson, the alderwoman of the ward the San Luis stands in

E-mail the operations officer at the Archdiocese

To assist you in speaking up on this matter, we have a form letter you can use to send to any of the people above. Cut and paste it verbatim, or use it as a starting point to express your own views.

If you want the Preservation Board to deny a demolition permit, it is important to say so.  It is crucial that the Board and the owners of the building understand that this surface parking lot proposal negatively impacts the potential and the spirit of St. Louis City.