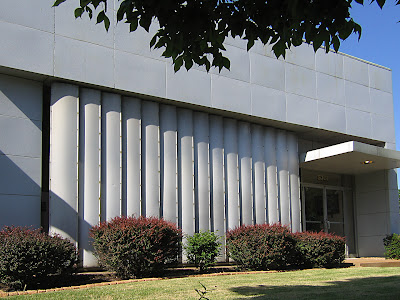 Chippewa & January
South St. Louis MO
In comparison to its brick bungalow neighbors, it looks like Johnny Sokko’s Robot. Normally, that kind of contrast would be more than enough to make it noteworthy. But in the 15 years I’ve lived in South St. Louis, no one (even mid-century modern fans) has ever mentioned this little oddball. 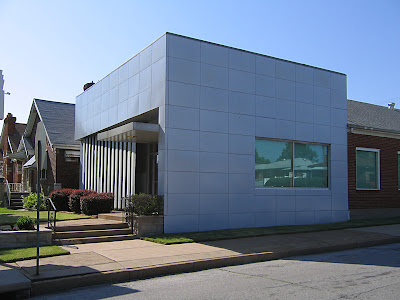 Maybe that’s because it is rather understated about its modern precision? Or that even though it’s kept neat and trim, there never seems to be any activity to draw the eye? That last question puzzles me the most; it’s the Gospel Church, a non-denominational congregation, and even when I’ve purposely gone by the place on a Sunday morning, there’s the church, but there’s no steeple with no open door to see all the people. 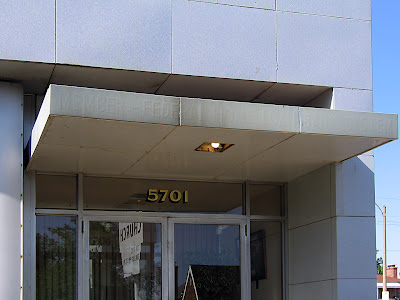 City records omit any information about the building itself, but with all the brick houses directly around it dating from the mid-1930s, I’m assuming it is basically the same age. The newer, tacked on modern facade has a distinctly mid-to-late 1950s look and materials. The 1959 City Directory lists Public Service Savings & Loan as the front tenant, with Albers Construction occupying the rear of the building. When looking closely at the stainless-steel-under-grey-paint awning (shown above), you can make out the original message: Member -Federal Home Loan Bank System. 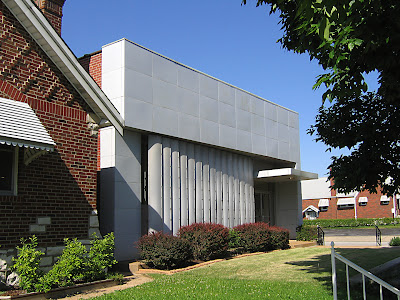 The sun shade made of vertical aluminum strips is like the brim of a hat pulled low over a face. Its limited and sedate color palette allows it to blend into the background. All of this contributes to the mystery of the modern cube hiding out in plain sight. 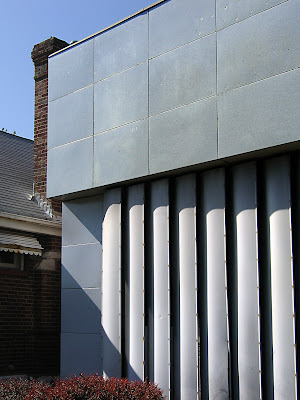 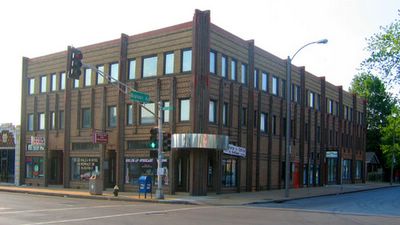 NW Corner Chippewa & Brannon
South Side, St. Louis, MO
Elegant yet curious, a symphony of bricks explodes into deco. It’s often referred to as the Keller Building because of the Keller Apothecary still operating in the corner slot. 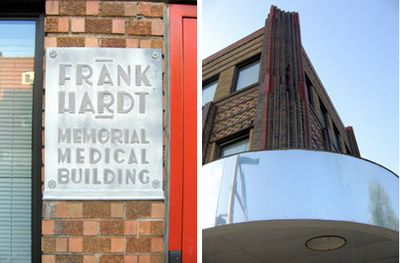 Closer inspection reveals the building’s actual name, but hey, most everyone has a nickname. The round corner marquee was a burgundy and neon advert for Keller until it mysteriously disappeared a few years ago. At least the replacement was mindful of its surroundings and circles quietly. There are photos of it floating around. Once located – or contributed (hint) – they will be posted. 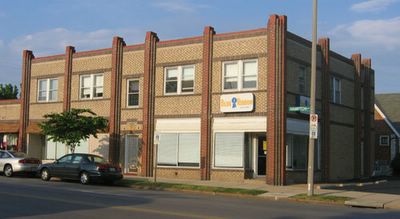 Hampton & Neosho
Less than a mile away is a muted, junior copy of the Frank Hardt building. Clearly, the same people were responsible for this building, but with only half the brick budget.