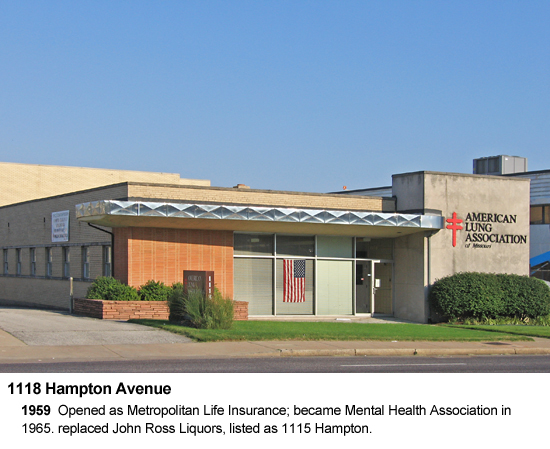 One of the most interesting chapters of how St. Louis City developed can be read with a drive along the entire stretch of Hampton Avenue. Starting at Interstate 64/Hwy 40 and heading south 4 miles to just past Loughborough Avenue, check you will find an even balance of original buildings from both before and after World War 2. 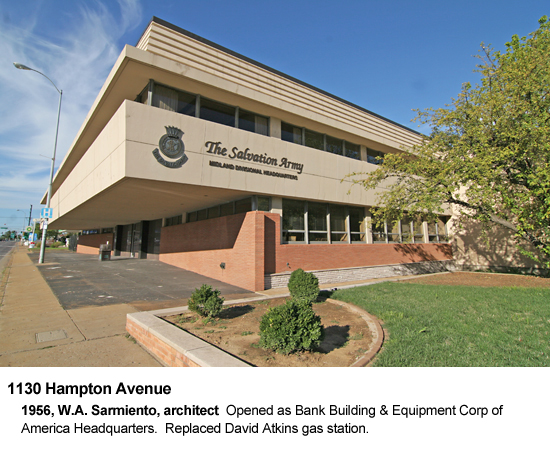 The emphasis is on “original” because there was little need along Hampton to tear down old buildings to make room for bright, more about shiny New Frontier buildings because large chunks of Hampton remained vacant land awaiting development at the close of WWII. 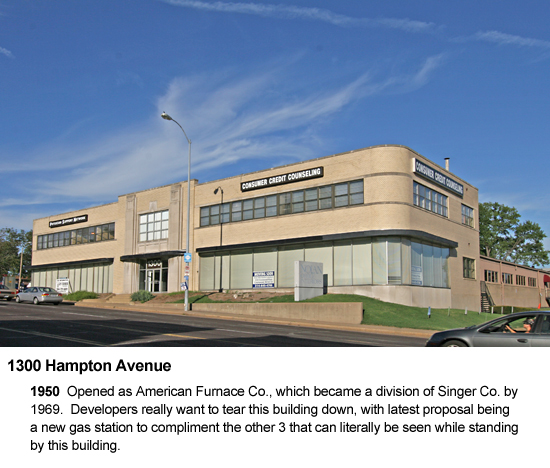 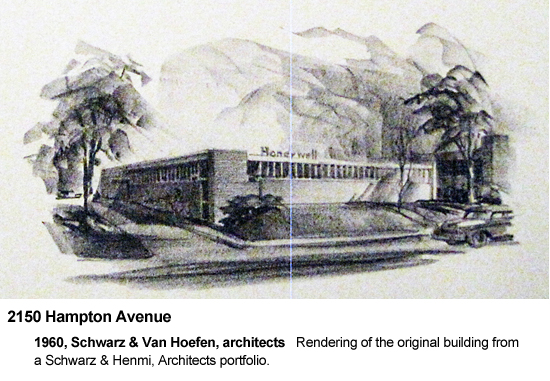 I did not know this until I began researching the origin of Hampton’s mid-century modern buildings, ampoule and was stunned to learn from the 1940 City Directory that there was NOTHING on Hampton between today’s Highway 44 and Arsenal. In 1940! Or that they didn’t have to knock down a single building to develop the intersection of Hampton and Eichelberger (home of the fabulous Buder Library building) because even as late as 1948 there was still no Directory listing for anything on that stretch of road. 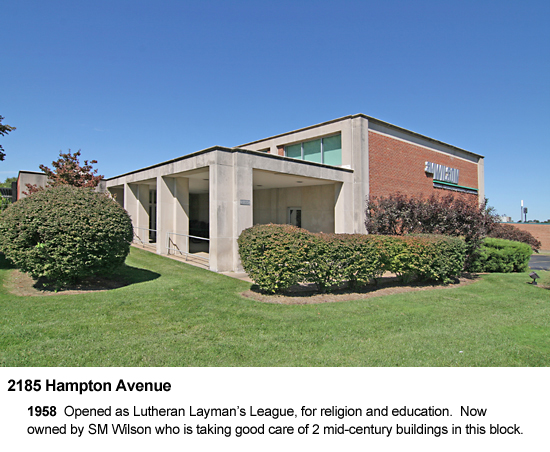 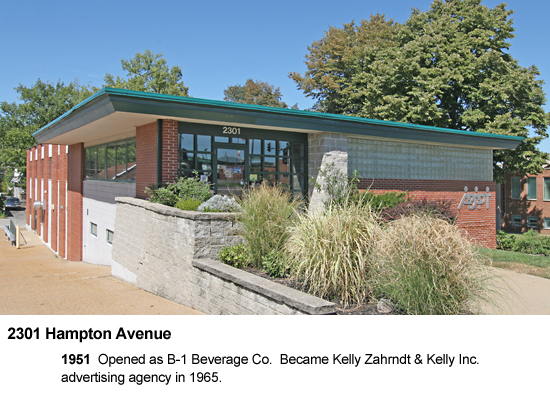 The St. Louis history of post-WW2 mid-century modern always focuses on the flight from City to County, or how old City buildings were demolished to make way for Urban Renewal. But along large swaths of Hampton Avenue, the mid-century modern buildings ARE the original buildings, and to think this happened within the City bounds at such a late date proves how the City of St. Louis is both so ancient and so young. This just adds to the schizophrenically endearing nature of our City, and highlights the importance of preserving and celebrating the historical and architectural uniqueness Hampton Mid-Century Modernism. 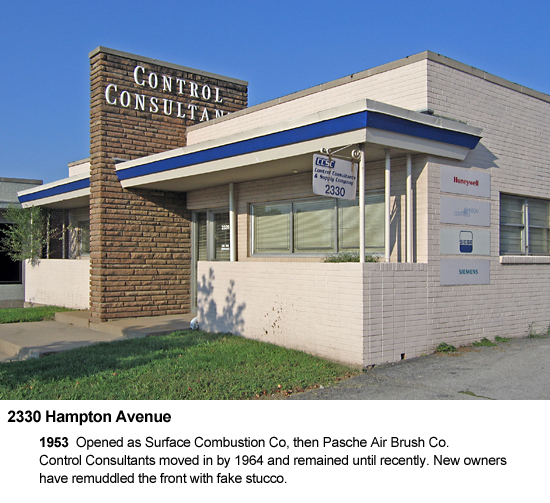 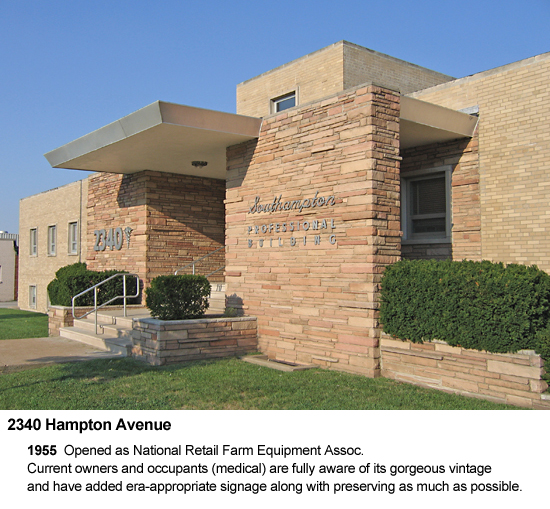 Hampton Avenue is close to the western city limits, and to a growing City that took from 1850 to 1900 to seriously expand west from Grand Boulevard to Kingshighway, Hampton would have been considered “out in the boonies.” According to the St. Louis Street Index, the name Hampton didn’t appear on a map until 1913, and only earned its top northern section between Manchester and Oakland avenues in 1921. 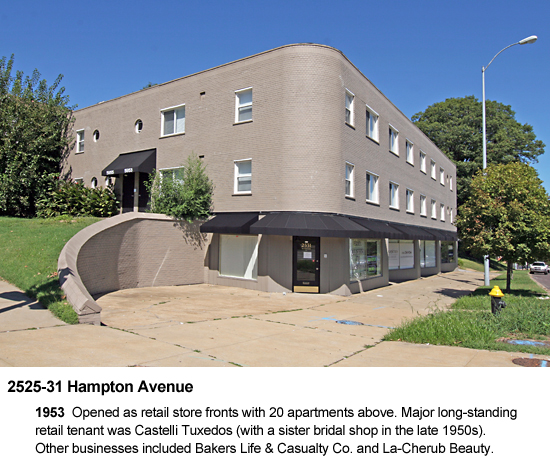 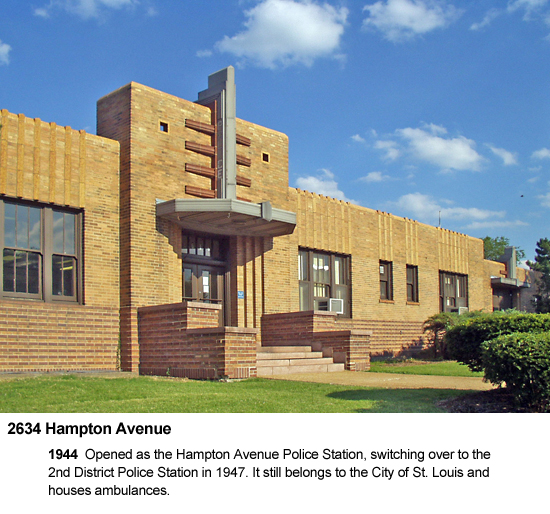 While there was continual residential development from the 1850s onward in the neighborhoods that surround Hampton Avenue (Oakland, Clifton, The Hill and Southwest neighborhoods), other than small pockets of commercial storefronts dating from the 1920s to the early 1940s, the bulk of Hampton Avenue appears to have been built up in earnest during and after World War 2. Meaning, once St. Louisans strengthened their commitment to the automobile, Hampton suddenly seemed much closer than before and worthy of commercial development. 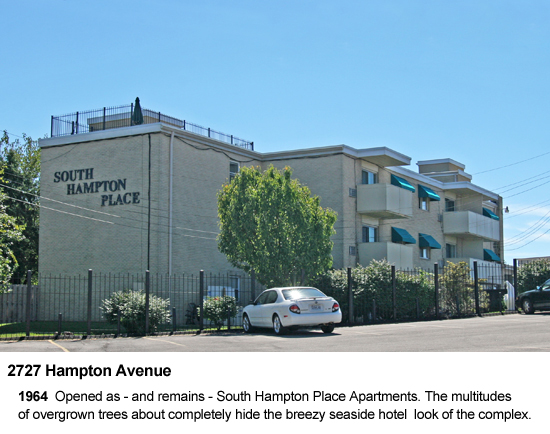 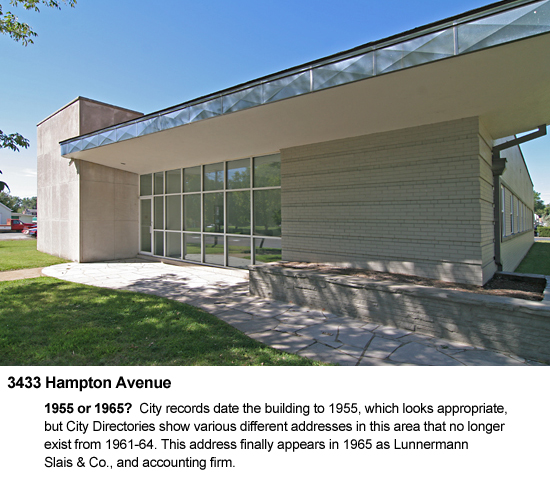 This would also mean that the density of MCM buildings on Hampton were designed and sited with the idea that people would reach them by foot, bus, streetcar and automobile. So this wasn’t a case of slotting new modern buildings into a pre-established urban grid (as was the case with Lindell Boulevard modern in-fill), but rather a blank canvas to paint with both the old and new colors available to planners, developers and architects in the mid-century. 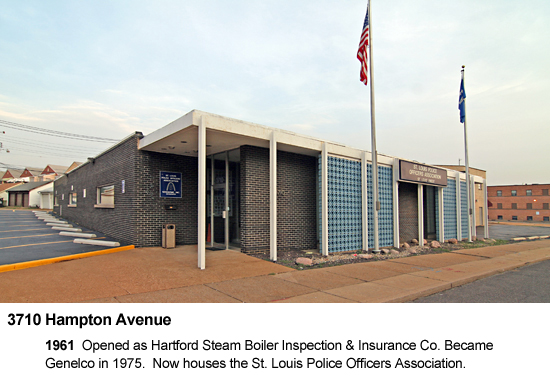 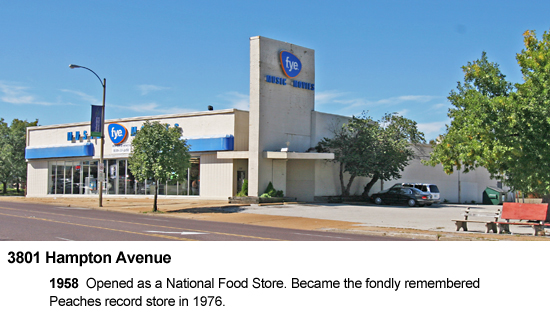 Since about 2002, I have been photographing the MCM on Hampton; some of the photos in this study are of a building in a younger or less-molested state. From the summers of 2010 to 2011, I purposely photographed 107 buildings, and spent way too much time pouring over physical City Directories at the St. Louis County Library headquarters, and on-line with Geo St. Louis. There are plenty of discrepancies between the two; I often had to rely on 1958 and 1971 aerial maps of Hampton to clear up confusion, or talking to an architect (Richard Hemi), a glazier (my father, Richard Weiss) who worked on a building in question, or asking older St. Louisans to dust off their memory caps and picture what used to be.  So, I know there will be plenty of inaccuracies of info that will be discovered, but now is the time for everyone to join in and share what they know. 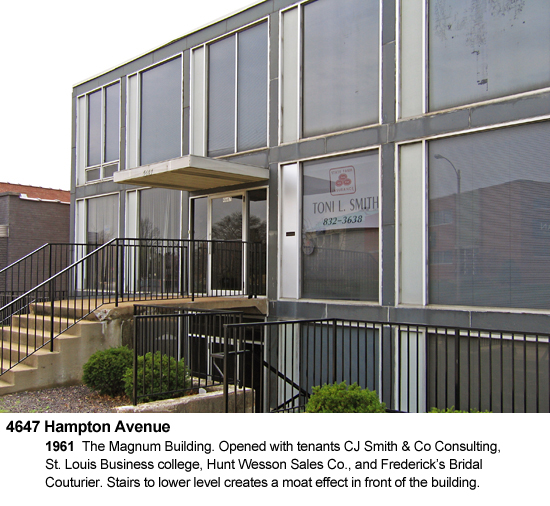 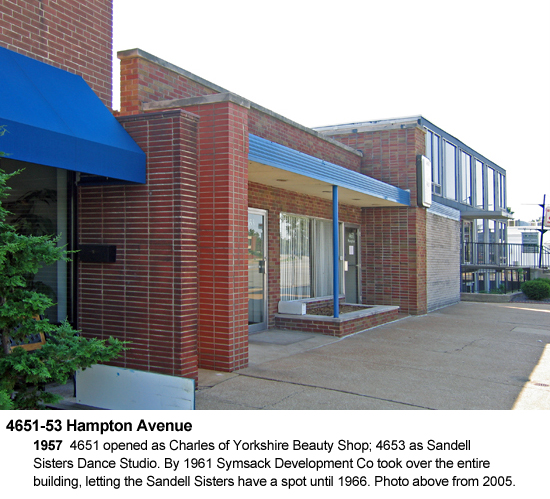 More on this building.

For the sake of space, only 30 of 80 buildings could be included here.

See all 80 Hampton MCM buildings and their history here. 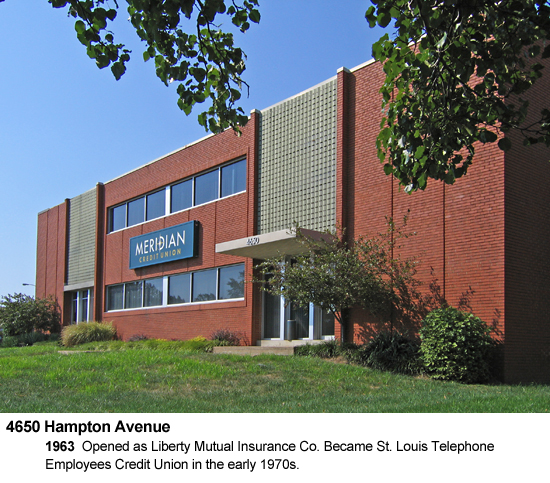 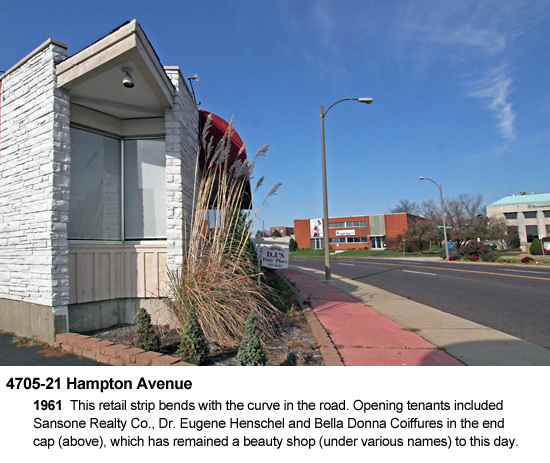 This grand palace at 2065 Hampton (at Wilson Avenue) opened in 1952 as Ollie Auto Top. Darren Snow found this photo as part of a display ad in the 1959 City Directory. The address was listed as vacant by 1969, and then Hwy 44 came through. A Steak ‘n Shake that sat at 2055 Hampton for about only 15 years also bit the 44 dust. 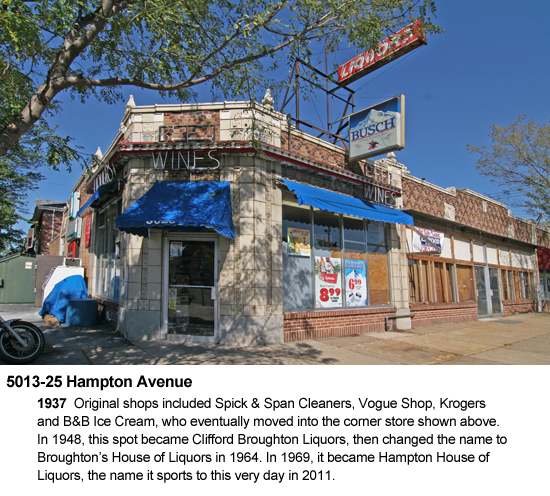 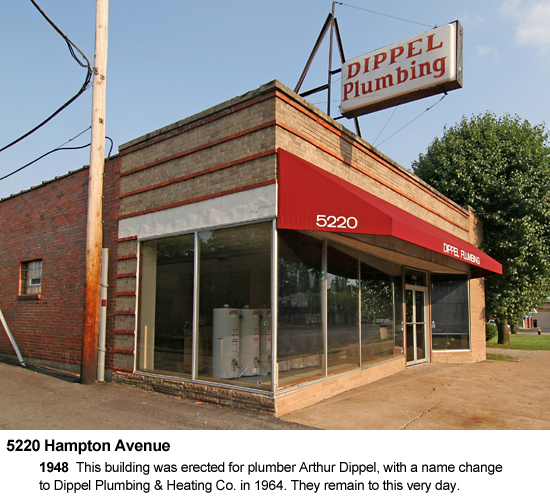 My research turned up a steady and over-abundant stream of liquor stores and bars all along Hampton, especially along the stretch running through St. Louis Hills. For instance, 5918 Hampton is today Area IV, and that storefront is carrying on a long tradition of housing only taverns, which began in 1936 with Robert Werges’ joint. Sometimes a retail block would begin and end with a liquor store; so no one ever had to walk too far for a brew? As the elders have said, all the smoking and drinking in Mad Men is not an exaggeration, and Hampton Avenue from 1936 – 1970 was the living proof! 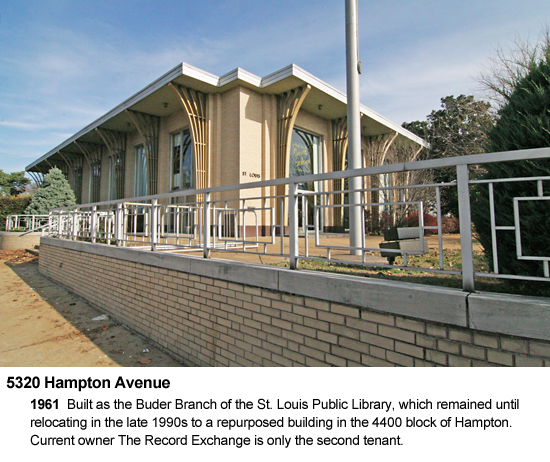 More on this building here and here.

After liquor, beauty and ice cream shops were the most popular along Hampton, followed closely by filling stations, which verifies how much more auto-centric Hampton was when compared to the other thoroughfares further east. 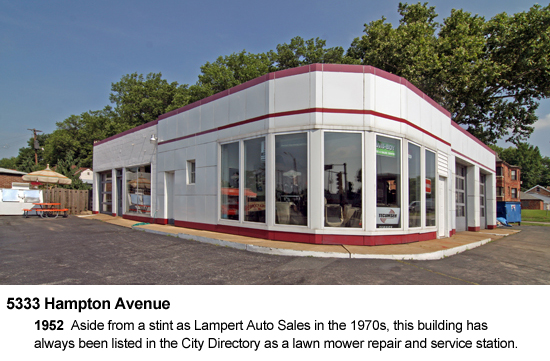 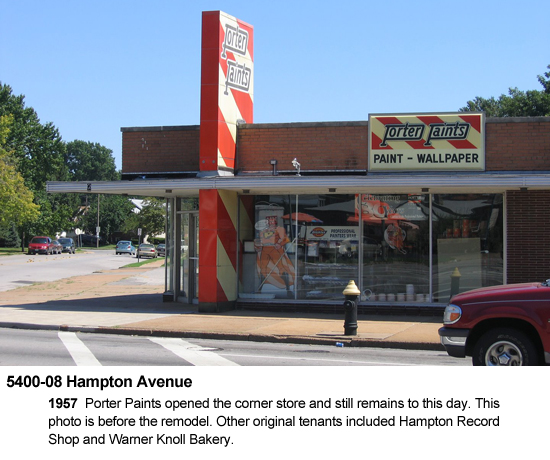 More on this building here.

There were businesses that moved just blocks away to get into newer buildings (like Charles of Yorkshire beauty shop or Gassen’s Rexall Drug Store), and lots of realty companies opened shop for a short time, reflecting how the neighborhoods around Hampton were still building up in the 1950s-60s. But there was always another business ready to move into a vacated storefront, and that still happens today. No stretch of Hampton has yet experienced the kind of rot that affects other parts of the city and their main thoroughfares. 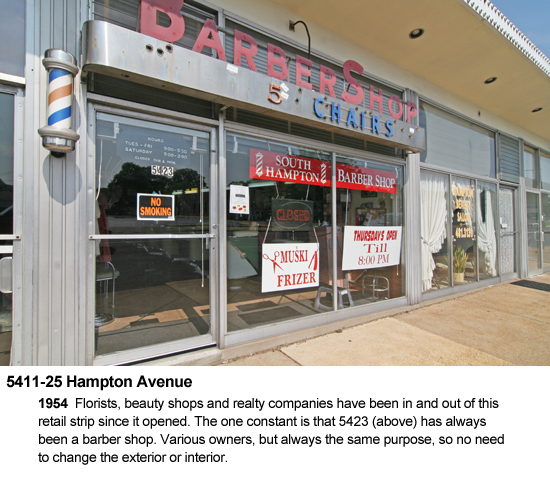 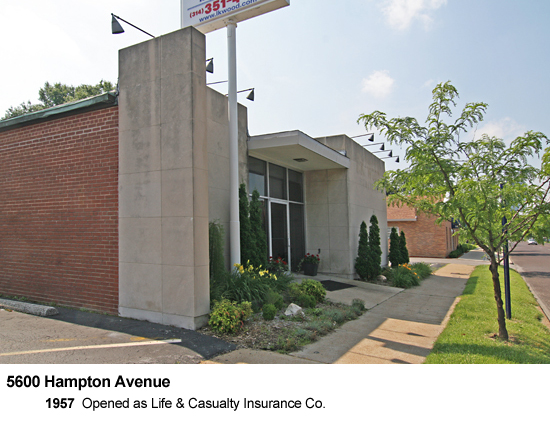 There are roughly 8 companies and institutions that still remain in the building first erected for them, including: Bayer’s Garden Shop whose building went up in 1948 as O.E. Bayer’s Garden, Furniture & Novelities; Porter Paints at 5400 Hampton, who set up shop in the new building in 1959; AB Dick Products still resides in their 1960 building at 2121 Hampton. Wise Speed Shop at 5819 Hampton moved into their new building in 1969, and only very recently did they close up shop and put the building up for sale. 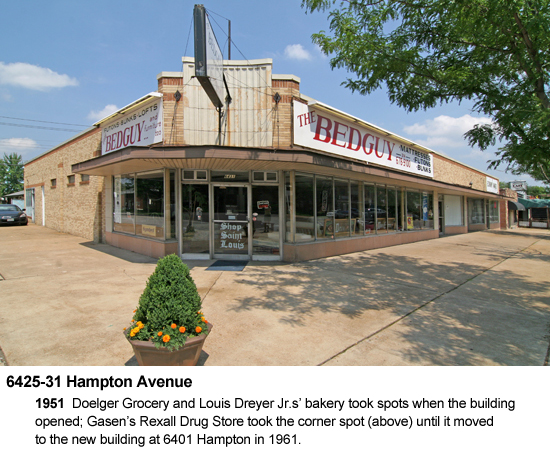 There have been some demolitions for something new like a highway (as mentioned above), or taking down a small house or filling station to accommodate a larger building. For instance, Stein Brothers Bowling was on the northwest corner of the Hampton/Chippewa intersection in 1965, but it was torn down to make way for what became Lindell Bank & Trust (which looks MCM but really isn’t). But in general, buildings get remodeled rather than demolished, and even when they are remuddled unrecognizable, it’s preferable to demolition. 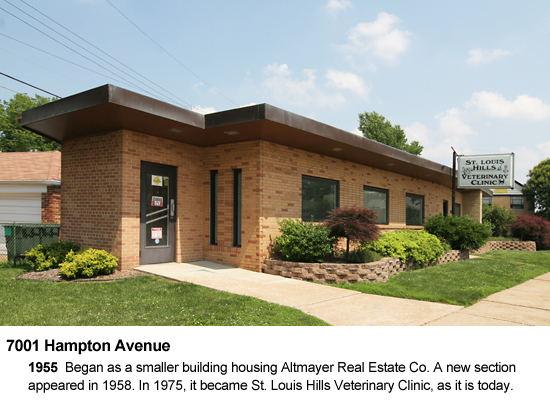 Two of the buildings in this survey are currently in the hot seat for demolition, which highlights why a study of the mid-century modern building stock on Hampton deserves a spotlight. This is a unique stretch of commerce in St. Louis City, an area that developed in tandem with St. Louis County, receiving the same kind of care and enthusiasm as shown to inner-ring suburbs like Ferguson, Jennings, Affton or Lemay. 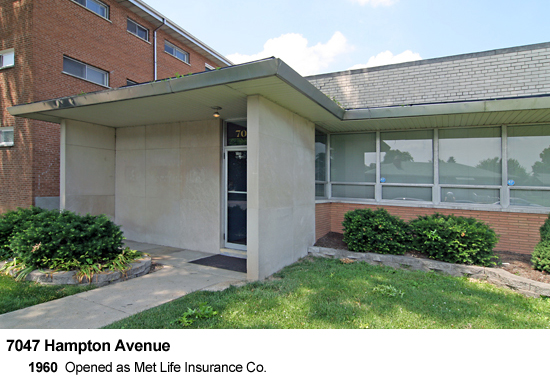 I invite you to

see a total of 80 Hampton MCM buildings at this link.

And then travel this great street with new eyes – maybe even find some new ones that I overlooked due to being overwhelmed with the treasure chest that is Hampton Avenue!

RELATED
South Side Copies
“Bldg To Be Razed” on Hampton