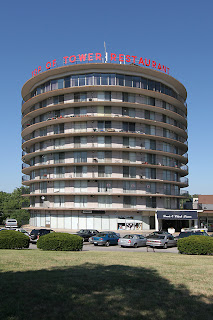 Chambers Road & Hwy 367
Moline Acres, MO
The Lewis & Clark Tower still stands as a slightly-raggedy reminder of the brief moment when North County was progressively modern and willing to create the image of glamorous new suburban frontiers. That’s the impression it still gives off to those of us who were stuck with a babysitter so our parents could party here, but childhood impressions are not always reality. 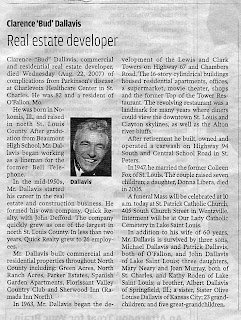 While reading the newspaper at the end of August, the picture of the man shown above caught my eye. He had a real Rat Pack “ring-a-ding-ding” air about him, so I read the obituary. Impression and reality heartily clinked martini glasses when revealed that this man, Bud Dallavis, was the developer of the Lewis & Clark Towers and its iconic, spinning Top of the Tower Restaurant. 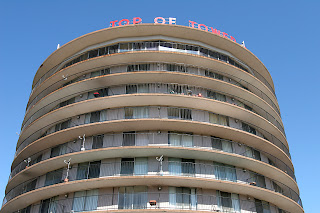 Development is listed as beginning in 1963, county records put 1964 as the birth date of the complex, and in 1965 architect George J. Gaza is listed as the only full-time commercial resident. That he stayed until 1967 while the complex was completed begs the question: was he the Tower architect? 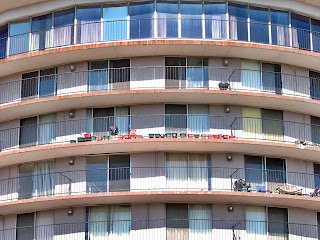 In 1966, the place was 100% jumping with at least 7 floors of wedge-shaped residential apartments (now condominiums,) each with two sliding doors out to the continuous balcony, with its own swimming pool and gym in the basement. Businesses on the first two floors of the Tower included Alpha Interior Designer, Donton & Sons Tile Co., Figure Trim Reducing, King’s Tower Pharmacy and a Missouri State License office.

Shooting off the Tower is a strip of retail facing Hwy 367, long-anchored by Stelmacki Supermarket, a rare, independent grocer still unaffected by the continuous grocery wars. The site slopes down to the West, creating a lower 2nd level building which held the Towers Bowling Lanes and the Lewis & Clark Theater (shown below). Occupancy for the complex was robust for 10 years, with an influx of dentists and doctors filling tower spots when others moved out. The Courtesy Sandwich Shop even had a storefront for a bit. The Tower didn’t show any longterm vacancies until the late 1970s. 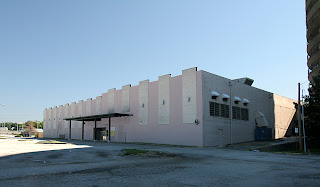 The remaining claim to fame of the Tower is the long-closed restaurant at its top, Rizzo’s Top of the Tower Restaurant, “the revolving restaurant… a landmark for many years where diners could view the downtown St. Louis and Clayton skylines, as well as the Alton river bluffs.” Considering how popular it once was, and how its myth still lingers, there’s surprisingly little information to be found about it. Internet searches only turned up a fuzzy photo of someone’s matchbook collection which includes a Rizzo’s cover, and entertainer Tony Viviano, who seems a natural to have performed in the joint. 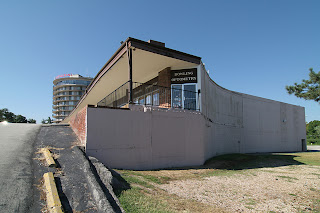 While visiting with my father, Rich and his wife, Ann, I asked if they ever ate at the Top of the Tower Restaurant, which became a rapid fire series of memories of the place, starting with Rich saying, “You know there were supposed to be 2 towers, right? Which is why it’s plural Towers.”

No, I didn’t know that, but that does explain why the building ends the way it does (shown above) and why the land closest to Chambers Road has remained vacant all these decades. So what happened to the other tower? Rich says that the company who originally owned it ran into some problems of partners stealing from each other, which left no money.

I tell him about the obituary for the developer whose name I couldn’t remember, and Rich asks, “Was it Bud Dallavis? He was the public face of the Towers, head of Quick Realty,” which the obit later confirmed as correct. I countered that the man pictured was really good looking, to which Rich says, “Yeah, that has to be him,” and to which Ann responds, “We were ALL really good looking at the time. We were a handsome group of people.” 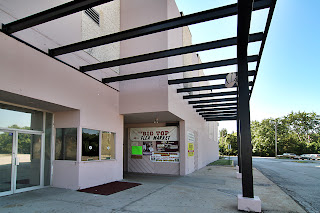 She was not bragging, just stating fact. This was suburbia in the mid-1960s, post-JFK assassination, mid-Beatles revolution. Rich and Ann were a part of the World War 2 and Korean War vets who left North St. Louis city in the late 1950s for the greener (and whiter) lands of burgeoning North County. Watch Mad Men to know exactly how they dressed during the work day, how they gussied up for frequent evenings out.

And Rizzo’s Top of the Towers was a popular, happening spot for them. The restaurant was turned out in the finest china and table linens, the food good. Was it expensive? Indicative of the times, Ann responds, “I have no idea what the bill came to at the end of the night. Women never saw the bill because we never paid.”

To which Rich tells tales of the endless rounds of free cocktails courtesy of Dick Grace, the Towers bartender commonly called “Buttsey.” Buttsey had perfected a way to look like he was taking money and putting it in the cash register, but it usually went into his pockets, and lingering guilt led to lots of rounds of “on the house.” Mr. Grace was found dead in his bed in the Towers apartments in the mid-1980s, a fatal heart attack at the age of 49, all those cuisines, cocktails and cigarettes catching up to him. By that time, the Towers and surrounding area were pretty much ate up by neglect, with all the original pioneers heading ever-further away. 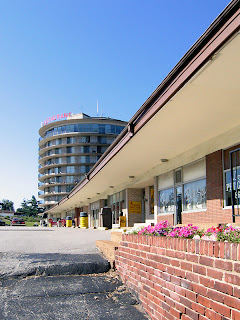 The rest of their memories just further cemented the vibe the building gives off to this day. Even though well-past its glory, it’s still in service. Most of the store fronts (shown above right) are occupied, and the Tower balconies are dotted with an endless series of satellite dishes, BBQ grills and plants. Heading out in any direction from the Tower reveals dozens of commercial buildings that followed its modern lead, now-shabby ghosts standing in the shadow of the Lewis & Clark Towers. May they all remain until the time they are brought back to life as proof that just once, for a short space in time, we had fabulous optimism for the future.