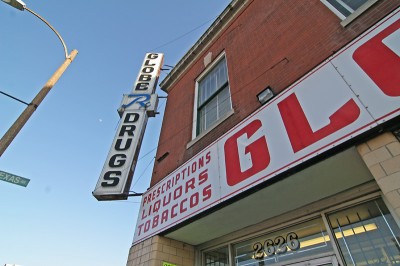 The Cherokee Street News broke the news that the venerable Globe Drug store had closed its doors, and got the sentiment right in the headline: 1939-2010. It does feel like a friend has died. 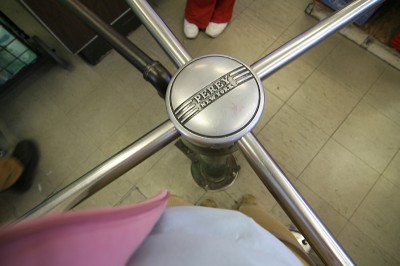 I was expecting a mass outpouring of reports and condolences in the St. Louis press, but so far, only the RFT has jumped on the tragic news. Thank you. 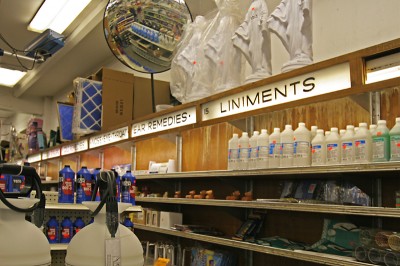 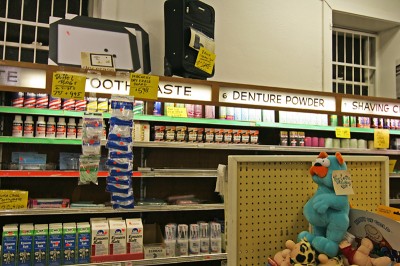 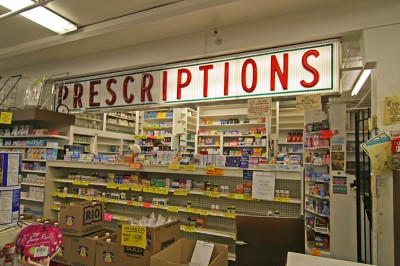 After the initial shock, my first thought was of Sandy Cohen, the son of the Globe Empire begun in 1939.  Sandy was born into this store, and it’s the only job he’s ever had. His enthusiasm and love for his working retail museum never seemed to waiver, and if – from his perch in the pharmacy – he noticed you taking pictures and reveling in the atmosphere, he’d cheerfully offer to take you on a tour. 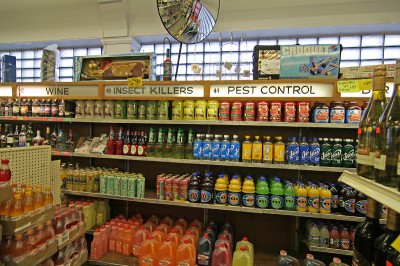 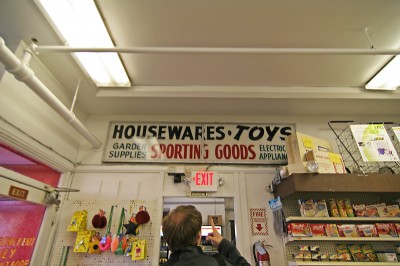 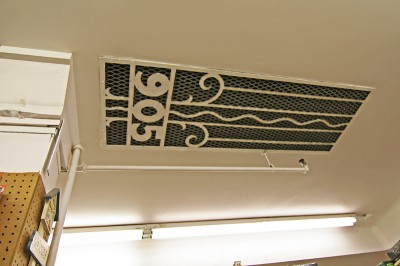 Sandy would point out that the place was a 905 liquor store before his family took over, and iron grills over the vents in the ceiling confirm that this 1913 building was the home of a long-gone, sorely missed St. Louis cheap buzz tradition, from 1937 – 1953. 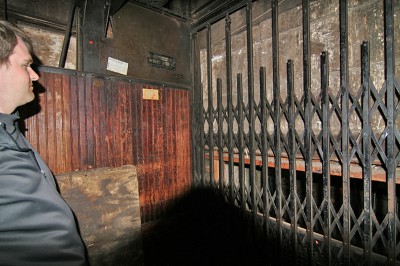 A Sandy tour gave you backstage access, which in this case is a ride in the original, unadulterated freight elevator up to the 2nd floor. The door loudly slid open to reveal a vast, dark area used for storage, with still-decorated Christmas trees and unopened Easter baskets scattered about.

And then comes the reveal of a bowling alley? 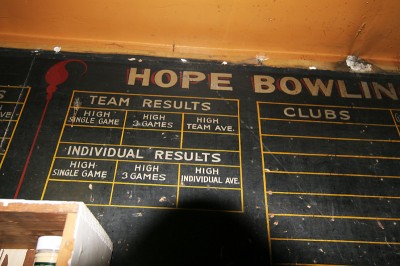 Sandy wasn’t quite sure if there actually was a bowling alley in the building, or if this was just a rescued relic from elsewhere that found a permanent home in the Globe Museum. 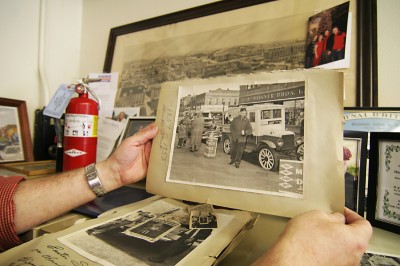 The business office truly was a scrapbook of the history of the Globe, and of the Cohen family, both blood related and extended. 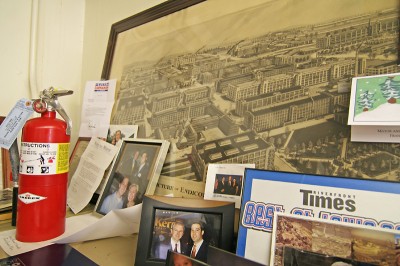 The rendering of the St. Louis cityscape (above) was commissioned by Joe as a way to feature all 4 Globe locations. As of this writing, the variety store on South Broadway near Soulard, and the wholesale warehouse at Clark & Tucker in downtown St. Louis remain open.  The Globe variety store a couple of blocks west of 2626 Cherokee closed in the mid-90s. 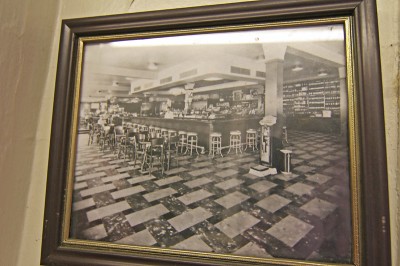 Among the hundreds of photos on the walls is a shot of this store when it was 905 Liquors. 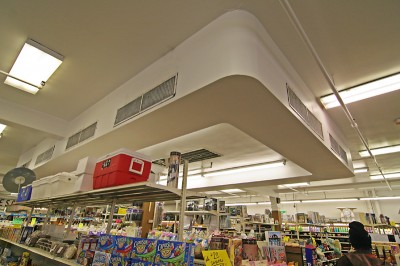 And here’s the same ceiling fixture still in place today. 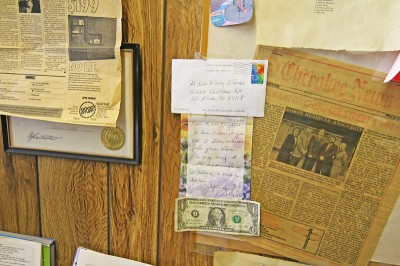 One of Sandy’s favorite mementos is a letter he received in 2008 from someone confessing to having stolen candy from the store when they were 10. They apologized and sent along this dollar to pay for what they took. 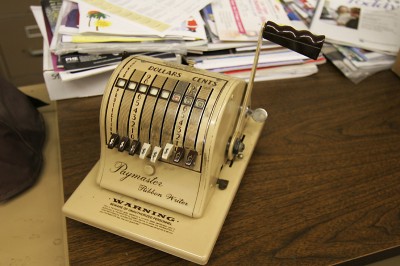 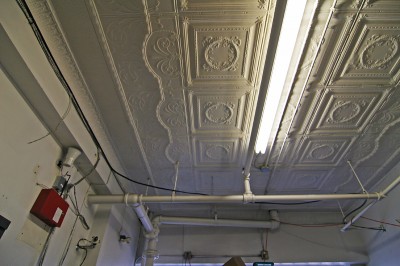 Globe Drug was one of those rare birds: a still-vibrant, direct link to the past. History has personal meaning when you can physically trace the connections and experience a small slice of what life was like before it hit warp speed, before it was corporate, before rat-a-tat gloss suffocated neighborhood personality. 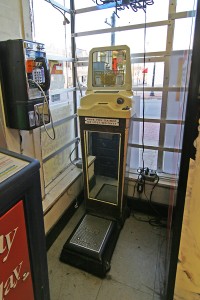 We’re at the reverse of needing to advance the population; the earth is suffering the damage of too many people at one time. So the modern need for offspring  seems an instinctive drive for immortality. Globe Drug felt like a slice of immortality, St. Louis style. I can feel the heavy sadness of Sandy Cohen and family as they pack up 57 years of life and cart it out of this building. And even as the neighborhood comes back to life all around it, all of us will feel the emptiness as we pass by 2626 Cherokee. 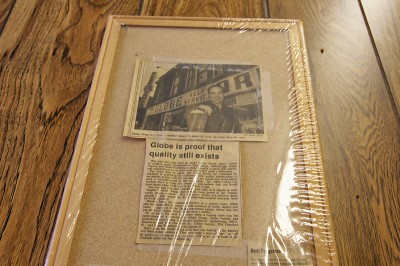 From a Suburban Journals article on the office wall:

“Who says that you can’t go back? In the “hurry, hurry” world of today’s super conglomerate drug stores, Globe Drugs…stands proudly as proof that quality and commitment to its customers needs still make a difference.  …the Cohen family has worked hard to keep the nostalgic atmosphere that you would have found when FDR was in the White House… So, go back. Go back to a time when a variety store was the cornerstone of a community.”