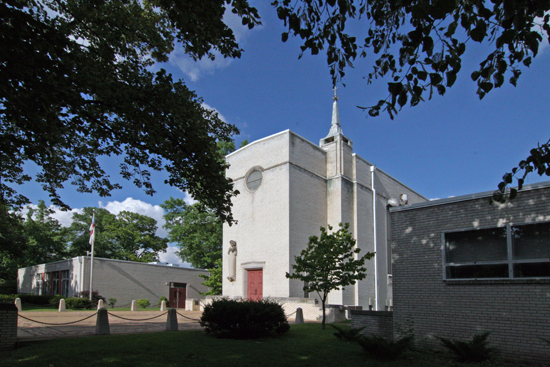 On July 9, 2010, the St. Louis Beacon presented a tour of St. Mark’s Church which began with Eugene J. Mackey, III, FAIA sharing his thoughts on the 1939 church designed by Frederick Dunn and Charles Nagel, and ended with his presentation “St. Louis Modernism in the 1950s.” 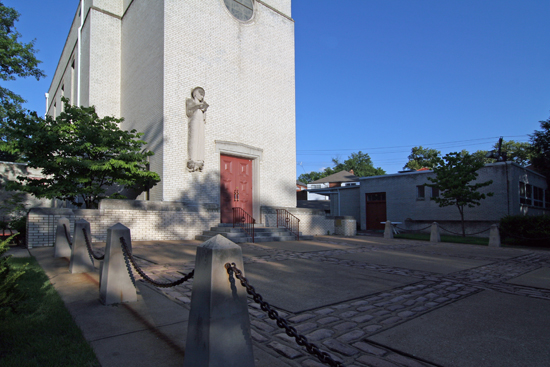 Here is a good history of the church building, wherein they note it is one of the first “uncompromisingly modern churches built anywhere in the world before World War 2.” Another interesting point, for me, is that unlike most churches which are built on corner lots (especially in St. Louis Hills, known for its four corner churches surrounding Francis Park), St. Mark’s rests in the middle of a residential street. Eventually, the entire campus would encompass the northern half of the block, but the affect of a white brick tower rising up from a sea of brick bungalows never fails to surprise and delight. 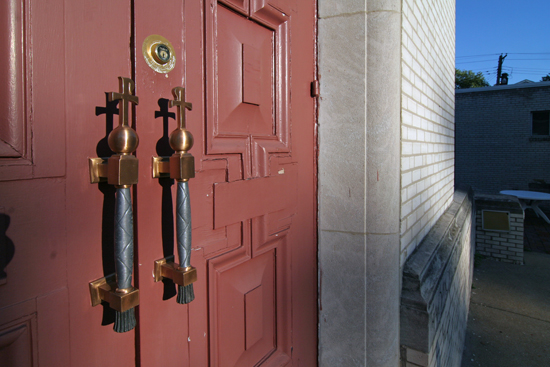 Gene Mackey III, of Mackey Mitchell Architects, is the son of  the Eugene Mackey, of Murphy & Mackey, who were among the royalty of St. Louis mid-century modern architecture, giving us The Climatron, the Washington University Olin Library and a host of exceptional modern churches, including Resurrection in South St. Louis.  So, our current Mackey has modernism in his blood, and he grew up absorbing all the work, colleagues and friends of his father. Luckily, he has a great memory, an engaging way of imparting important historical information about our city’s modern architecture and the learned anecdotes to bring it all to life.

This is why I’ll let him talk about St. Mark’s, as recorded that night: 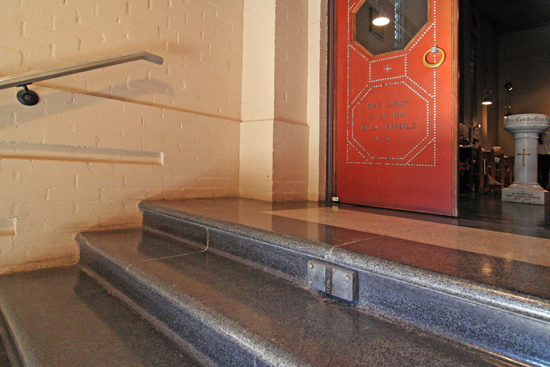 “(St. Mark’s co-architect) Frederick Dunn went to Yale, and was in school with Eero Saarinen. People don’t necessarily make that connection. Eero Saarinen was a powerhouse, even as a student, a very dynamic, powerful individual. Frederick Dunn was a counterpoint in school, more of a classicist in his approach to things. Also at the same time at Yale was (St. Mark’s co-architect) Charles Nagel, the man that – as an architect – became the director of the St. Louis Art Museum… and was also on the jury for the Jefferson National Expansion Memorial.” 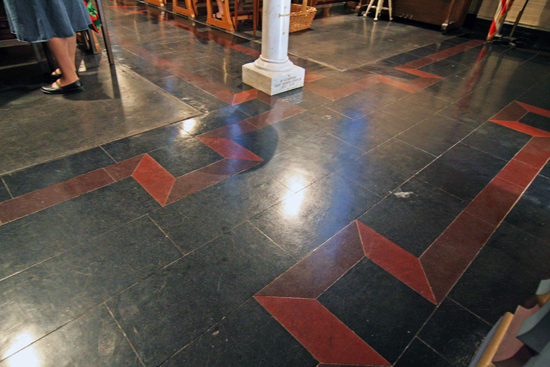 “(Dunn) had an amazing whimsy.  … Anyone who’s an architect certainly knows about St. Mark’s, which was done in the late 30s. And think about that – in the late 30s! When you walk around it, think of the elements, the details, the attention, the imagination that he’s bringing to every element.” 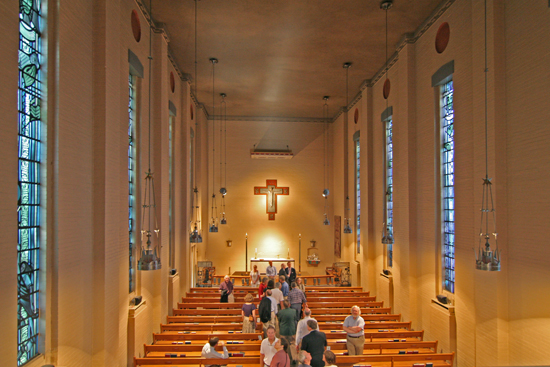 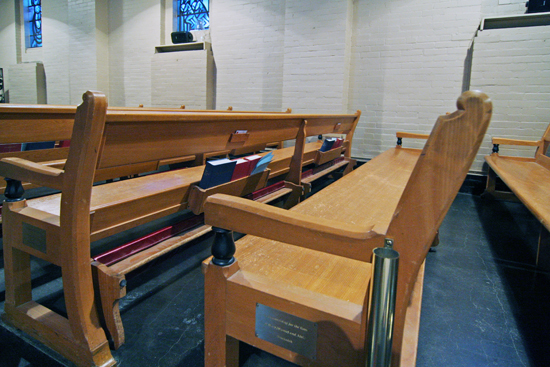 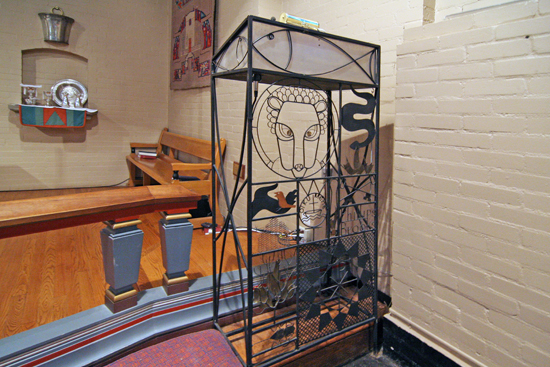 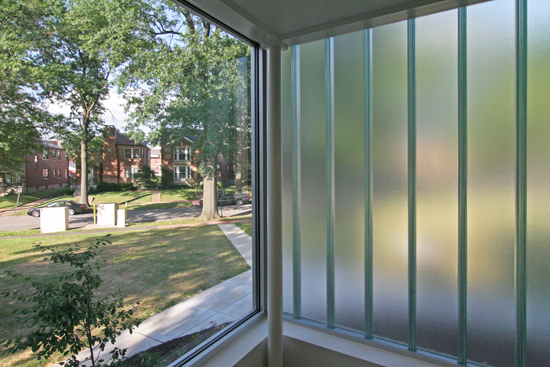 “Bill Bowersox is with us today. As we passed from the sacristy to the rear addition of the church, I think we were all struck by the respect and dignity and proportion of that addition (his firm designed). I think that Fred Dunn would be very pleased. I compliment you for that.” 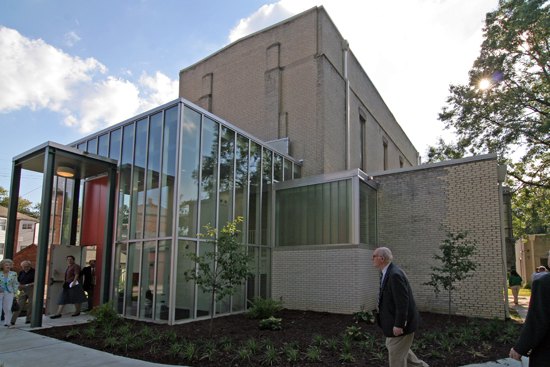 William Bowersox, architect of the St. Mark's rear addition, is seen on the right, walking toward the rear entry. 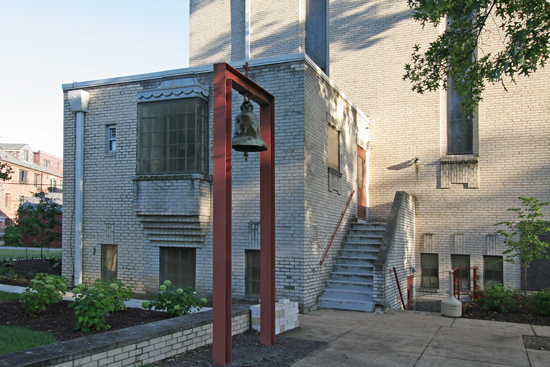 “Looking at the way Dunn used masonry, I bet you – and I might be wrong – but I bet his original intention was to do this church in stone. Because you don’t see many buildings in white brick, and I don’ know if it can be documented, but it’s an interesting thought about the use of materials.” 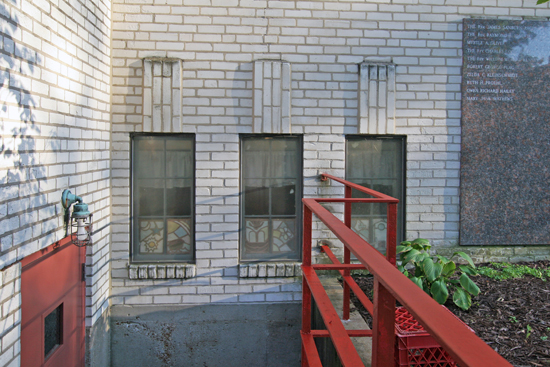 Mackey’s presentation of Modernism in the 1950s was a series of photos of St. Louis structures to which he shared facts and observations. His introduction also summarized why these buildings still captivate:

“When you think about something being modern, it’s of the moment, it is what is contemporary. It has to do with looking forward and often tied in with technology. In this (1950s) era, to me in terms of design, its reflected in dynamic forms, a new way of thinking, not necessarily relying on tried and true, but exploring new things. Line – the power of line – the power of form, the dynamics of movement of the eye.”

A highlight reel of what he covered includes:

• A belief that the loss of Sportsman’s Park was one of the major contributors of the rapid decline of North St. Louis

• “The loss of the streetcar lines in the 60s also contributed to decline in the neighborhoods. Because of the streetcars, the small businessman on the corner could rely on a certain number of shoppers to get off the streetcar everyday to buy flowers or ice cream. There was a consistency there that was very critical. Of course, we had to get rid of them because they were in the way (of the cars).”

• Levittown: “What they bought here was being totally tied to your automobile. Remember that in St. Louis in the 1950s, you could walk out your door, and walk down the street, or get on a streetcar and get everything you needed. Maybe even walk to work. That was impossible in Levittown.”

• Harris Armstrong’s former Magic Chef building:  “I consider that it’s in mothballs, and someday someone is going to buy this building and restore it to what it should be.”

• Revealed that there is a Paul Rudolph-designed home in Warson Woods! 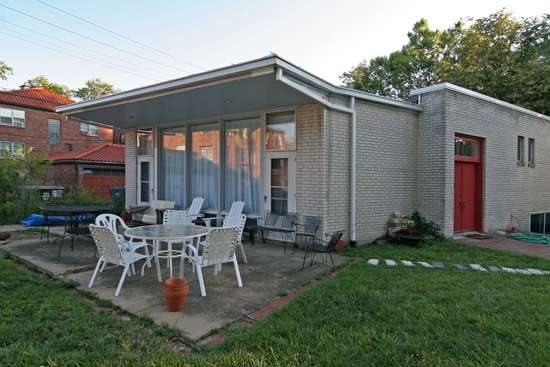 Rear of the Rectory built in 1950-51 from a design by Frederick Dunn.

After the slideshow, Mackey took some questions from the audience, and it was fascinating because it was chiefly a conversation among architect peers. Someone asked what the biggest losses have been, building-wise (his answer: losing the buildings around the Wainwright Building detracts from its greatness because it’s isolated), but generally, Mackey sees it differently than those of us lamenting the mid-century modern losses.

Indicating the presentation he said, “We’re looking back 60 years, and fortunately, so many of these buildings still exist, telling so many different stories, playing so much different kinds of music. If you think of architecture as frozen music, think about the different melodies that are played by the buildings you just saw. It’s fantastic. It was a great era.”

And it was true that 95% of the structures he had presented ARE still standing, which is amazing! And we need to find ways to insure that these historically and aesthetically important buildings remain standing. 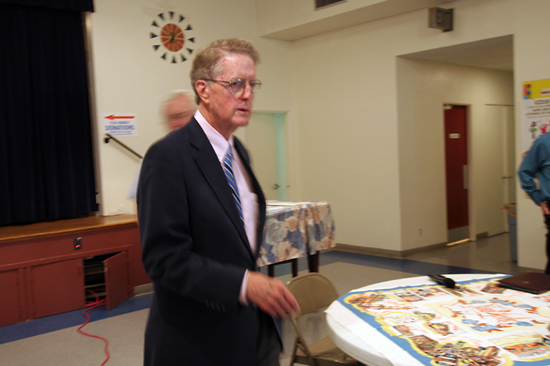 Gene Mackey, III, FAIA after his talk on St. Louis Modernism in the 1950s, inside the St. Mark's Parish House.

The last bit before everyone broke for refreshments was the one that riveted me the most. Jamie Cannon asked for Mackey’s statement on new residential architecture, namely the bloated McMansions that spring up after tear downs. His thoughts should be a separate presentation all on its own:

“Every time somebody builds one of those monster houses, it has to do with people’s ambitions. People come into Ladue with (plans for) these monster houses, and we try to talk them out of it. And most of the people who build those monster houses don’t live in them for very long, for whatever reason. And then the community is stuck with them. They tore down Buster May’s house in Ladue and they’re building Versailles, and there’s nothing we can do about it. It wasn’t against the law.”

It’s hard and foolhardy to mess with personal property rights, which is why I think grassroots appreciation and education, combined with an appeal to trendy hearts (think Mad Men), is what will calm a good portion of the MCM tear down madness in Mid-County.  Or with our Recession (also known as The Great American Reset), maybe shaming folks into “a certain amount of modesty” would be a path to follow?