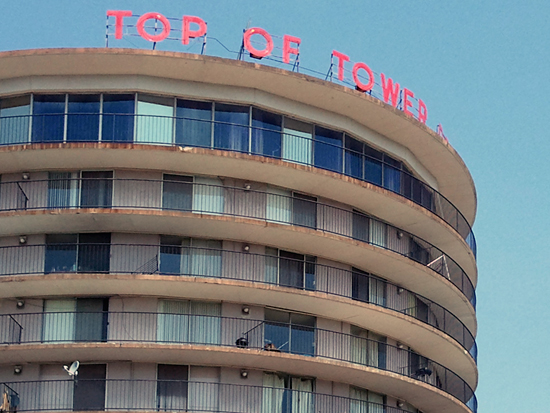 This post about Top of the Tower Restaurant from October 2007 is by far the most-commented entry I’ve ever done. Within the comments, we hear from the granddaughter of Tower’s developer Bud Dallavis, as well as several people who worked there over the years. We learn that it did NOT spin (people confuse it with the former Stouffer’s restaurant in Downtown St. Louis), and a few people share the recipe for Rizzo’s famous Spinning Salad. 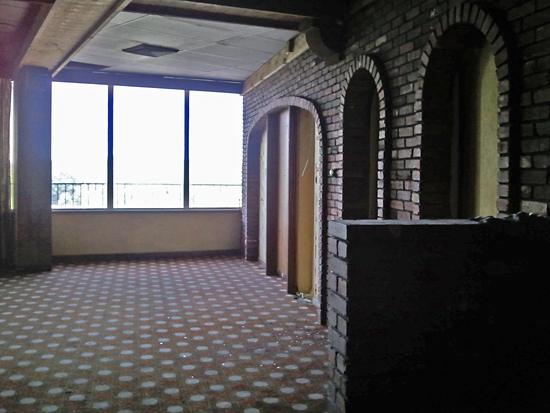 A post comment from the end of July 2011 set off alarm bells:  Michael Collins went on an adventure inside the Top of the Tower building, and made it all the way to the top and inside the long-vacant Rizzo’s Top of the Tower. He even took pictures!  I pounced on him like a puppy to a chew toy, and he gladly consented to share his photos on Facebook so they could be shared on B.E.L.T. All of the photos you will see here were taken by Michael with his cell phone. 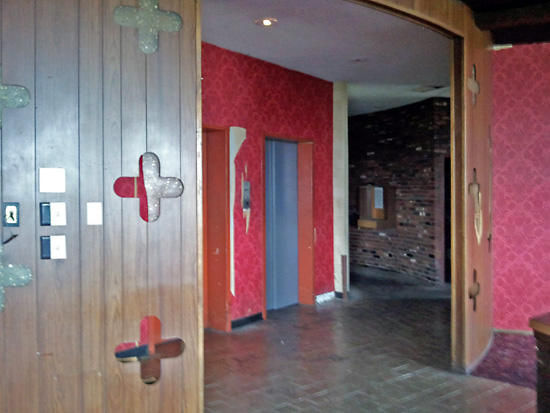 The elevator in the Tower lobby no longer goes up to the top floor, but the stairs do. When Michael got to the top, the door to the restaurant was wide open, “and there were no signs stating no trespassing, although I’m sure they don’t really want anyone up there. I don’t really recommend going up there for your own safety.” He told of some strange encounters with questionable people (and dogs) during his time in the building, so I’m heeding his advice, and very grateful that he chanced it, took these photos and shares them to add to the history of a beloved North County restaurant that continues to be held warmly in the hearts of all who went there. 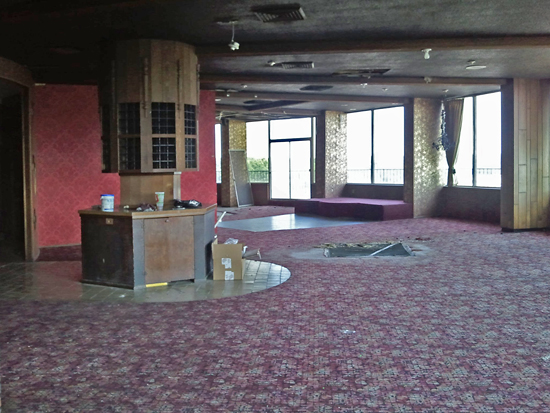 After the adrenalin high of sifting through his photos, I was feeling like Peggy Lee asking “Is that all there is?” This is what the mythical place actually looked like? Really. 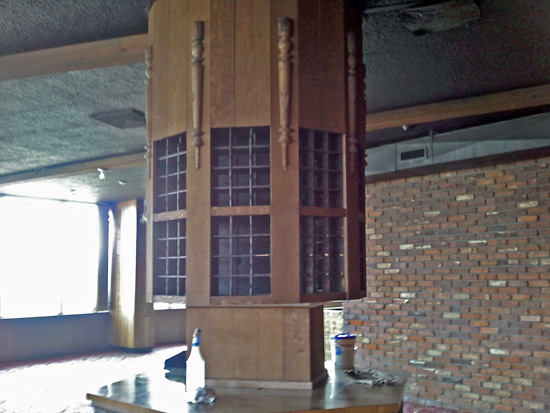 My overall impression of Rizzo’s interior is what I call Spanish Bachelor. It’s a term I use to describe a late 60s/early 70s design plague in swingin’ suburbia. It was a hearty embrace of EZ Brick, Chianti bottles with candles stuck in ’em, blackened wrought iron (real or fake), dark distressed wood, masculine-colored velvets, corduroy pillows and macrame plant holders. It was a look favored by heterosexual single men, and we’d have to ask one of the survivors of this faux-rustic 16th Century Spanish matador design decision what it was meant to convey. 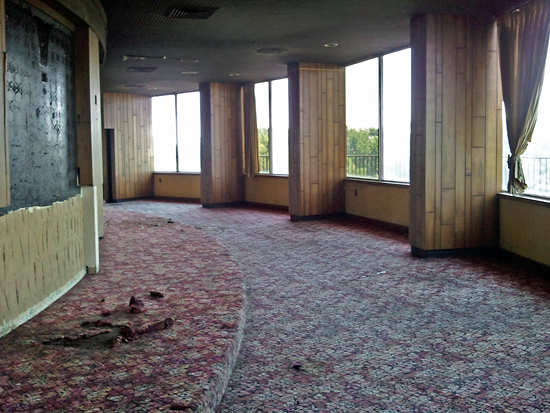 I never imagined that the penthouse showcase of the magnificent mid-century modern tower – all pink metal tubular sleekness – would look like this. In the photo above, the wood paneling on the window columns feels right for a place that opened in 1964. 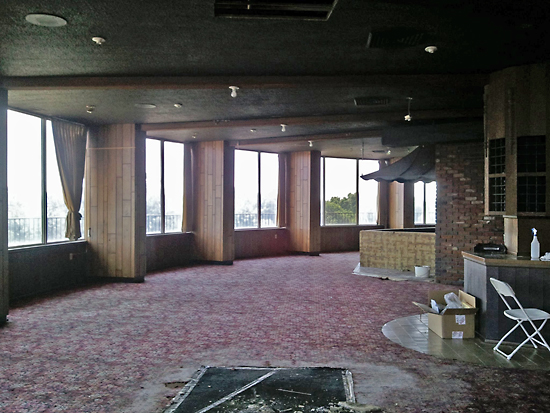 I’m assuming the ceiling was originally white so that the coffers radiating out from circle center met up with the paneled columns to create a starburst effect. 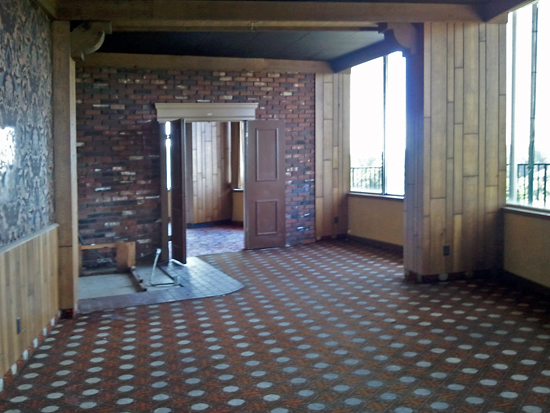 But the rest of this….?
OK, the place has been vacant for a long time, but we can overlook the neglect to get a sense of what was. And I’m getting the impression that lots of remodeling went on over the years. Or that there was one major sweep of a re-do in 1975… 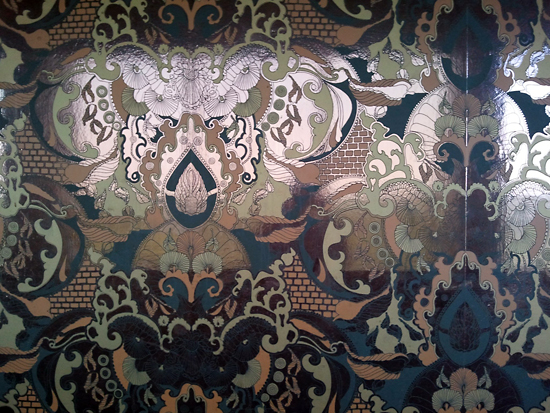 …because this wallpaper IS 1975 personified. And it has held up rather well, don’t you think?

There is the fantasies that those of us who weren’t alive/participating in that era have, and then there’s reality. My fantasy for Top of the Tower might look a bit more like this series of photos. And maybe it did back in the day.  Remodeling and updates happen organically over time, and restaurants – particularly – have to stay somewhat current and fresh to remain open. So we see a wide hodge podge of design fads piled atop one another. 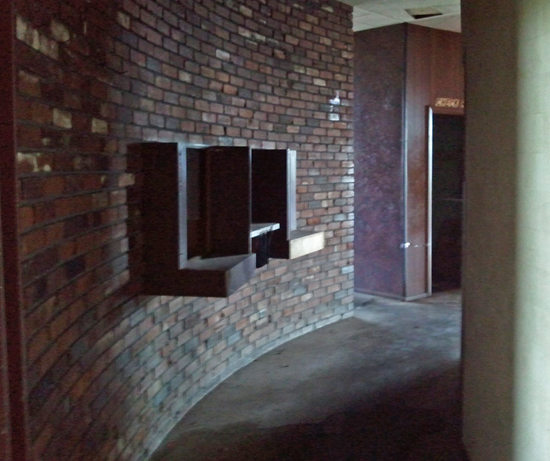 Obviously, the restaurant conveyed differently with furniture and lighting. Have you ever seen your favorite bar during the day, exposed to natural and overhead light? Then you know there’s a real magic to low lighting at night. Cocktails help everything along, of course.

But in all the memories that have been shared about Rizzo’s Top of the Tower, it was never about the decor (though the views were a major treat). It was the people who worked there, the excellent customer service, the superior quality of the food, and the sense of specialness all of these things combined created for everyone who went there.  We’re now looking at what remains of a place long separated from its magic. 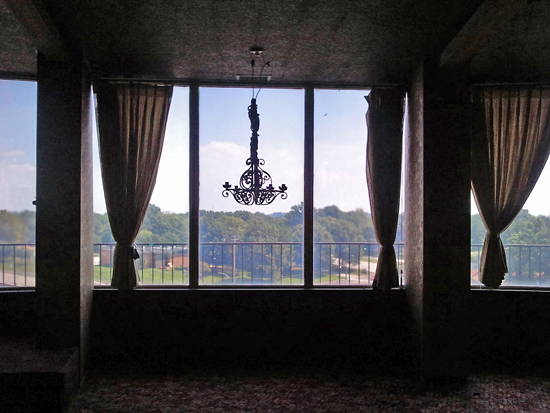 A major batch of thank you goes to Michael Collins for making these photos available to us.

And for all of you who once worked there or ate there on a regular basis, could you please tell us about how the place looked over the years? What did it look like when it opened? What kind of changes were made over the years?

Maybe seeing these photos will spark you memories and you’ll share in the comments as copiously as you did previously. If you have photos to share, that would be excellent, too. 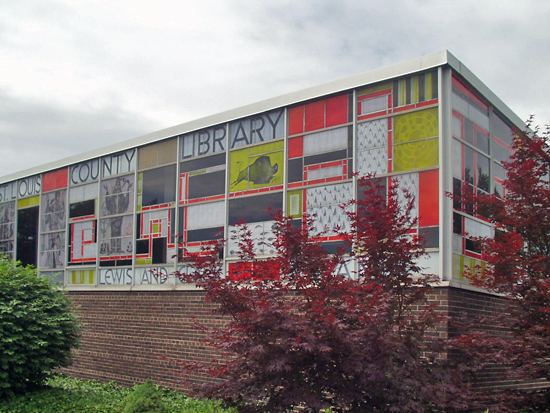 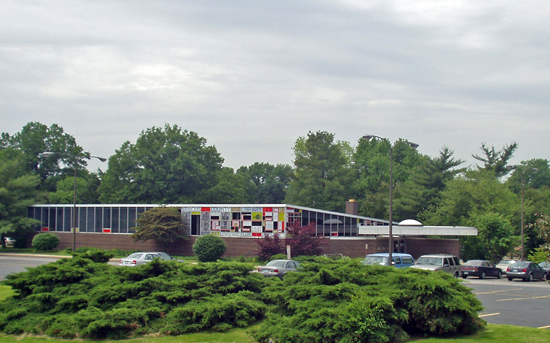 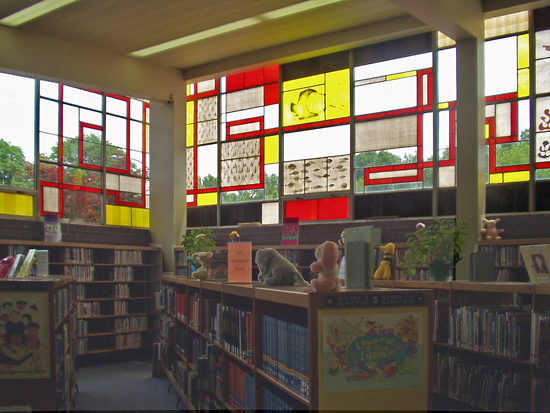 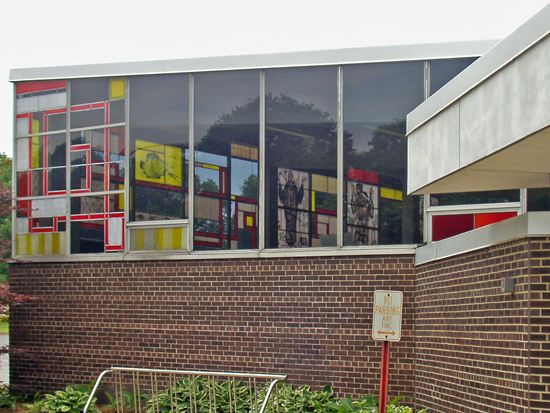