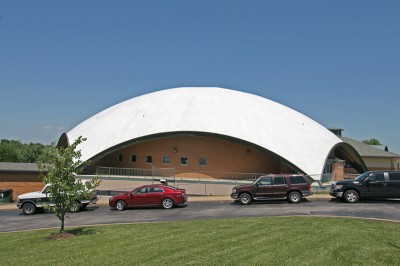 It was an idle cruise on a summer day, heading up West Ripa Avenue between Telegraph and South Broadway, when the sight above hovered into view.  In and of itself, an arresting sight, but in the context of dense rows of tiny, 1920s bungalows, it was outright alien.  What is it? 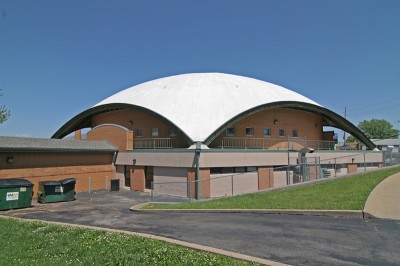 It is the gymnasium for the Hancock School complex, also known as the Tiger Dome.   It floats like an extraterrestrial among a sea of much newer, post-modern buildings, and because the campus was so shiny penny clean and new, I wondered if the gymnasium was also new, but built to look like The Jetsons. 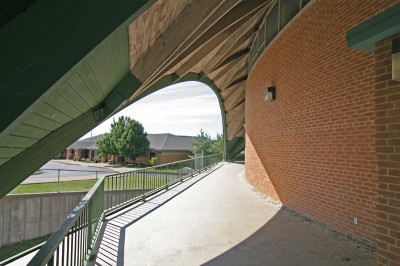 Venturing in under a canopy that thrusts its tentacles to the concrete walk ringing the circular gym, it was clear it was an older building.   No one would spend the time or money to construct something like this today, especially an old, established school district tucked into a confined space within an established neighborhood. 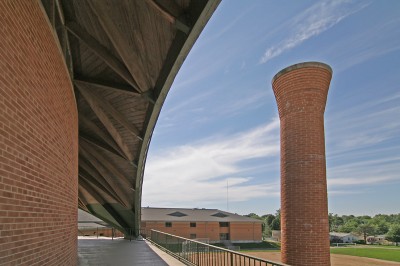 The E.T. gymnasium was built in 1964, and the rest of the campus was revamped in 1996, which was a major undertaking that required voter approval for increased taxes to fund such a major project.  What amazes me is that the gym survived !  It sits almost dead center in the campus, and you know it required all kinds of special planning to make the new buildings rotate around it, or butt right up against it.  In most cases, this building would have been sacrificed to the gods of progress, demolished without a second thought.  Yet it – and its smokestack – still stands. 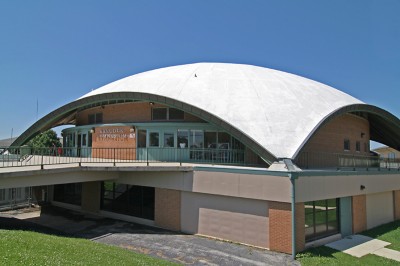 The roof’s wooden frame would require regular patch and paint maintenance, as would the roof itself, which is brighter than freshly laundered tennis whites.  The deep eaves are ultra inviting to birds, so pigeon poop is a major issue.  You know the custodians know these things, and deal with it constantly, yet they opted to keep the alien gymnasium!  It fills a heart with gladness, it really does.  Go Tigers!

If any of you know the story about why this alien, mid-century modern gym was spared during a major remodel, please do share the story with us.