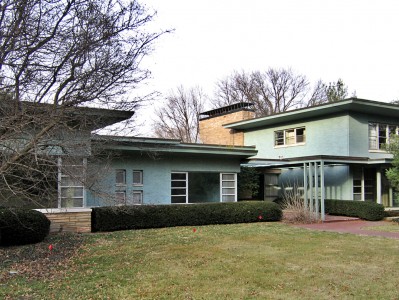 In Spring 2006, I documented the last days of a Ladue mid-century modern home that was tagged for teardown. It was built in 1950 for Louis and Mary Zorensky, and the undeniable beauty of this home, coupled with its sad fate, sparked a lot of posthumous anger and admiration.

Learn more about what replaced it here (scroll down 30%). 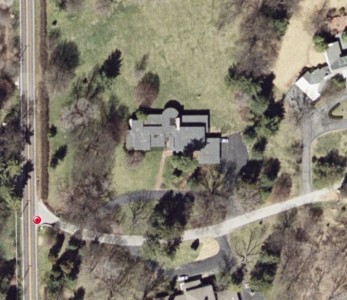 A Google aerial shot of the Zorensky Residence.

Recently, one of the daughters of Louis Zorensky found the B.E.L.T. entry about her childhood home, wrote to say she was moved by the photos, and ask if it was possible to have copies of them.

I sent her a photo CD that included the published photos along with many unpublished extras. I consider it a duty to photographically preserve mid-century modern history, and an honor when some of those photos can preserve treasured family memories, as well. 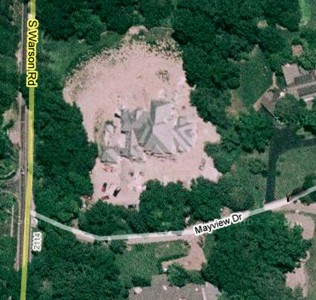 The same space after the Zorensky Residence was torn down for redevelopment.

Irene and her sister Doris were kind enough to share some of their memories of their life inside this dearly departed home, and I now share them with you. What touches me the most is that you can tear down a home, but love keeps it alive beyond the physical plain.

My brother, David, let me know about your website and its incredible pictures of our family home. When I pulled up the website, I was amazed at the photographs and how they captured the essence of its wonderful siting, daring 1950’s architecture, wall planes and roofing following the lay of the land and its modern detailing with lots of glass, overhangs and ins and outs.

Thank you so much for the wonderful comments on your website. My father would have hated to see the house demolished but he would have so appreciated those comments. He loved that house that he and Mom built and took such good care of. He also loved the old trees that had been part of a larger parcel of land that was an arboretum for a previous owner. He worked to preserve them. That some people so appreciated his house would have made him so happy.

I was 7 years old when we moved in. My schoolmates would tell me that they had seen our glass house on Warson Road and how different it was. One person actually told me that people living in glass houses should not throw stones. 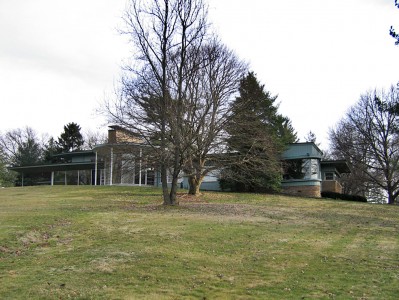 Another memory is of my brothers, sisters and me playing pretend in the tall pine tree grove at the front of our house. We also had fun rolling down the hill in the back, especially when there was snow. And then there was the fun modern furniture and the quirky details like the circular planter in the entry hall, the wood cabinet bar area and the radiant heated terrazzo floors that we sometimes sat on to get warm.

But as a child, I did not appreciate the house itself as I can now. Your wonderful photographs helped me see it with a fresh eye. I just wish another family that loved 50’s modern architecture could have bought and preserved it. I am grateful for having your pictures. Thank you so much. 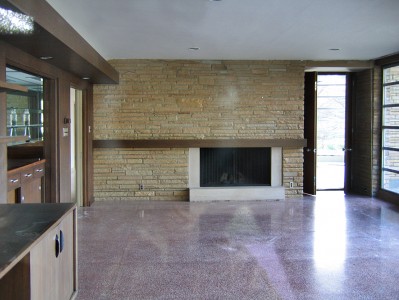 Growing up in the Mayview home was an interesting experience. My parents always had a great appreciation for modernism, which was reflected not only in their home but in a remarkable contemporary art collection which they were able to showcase in that home. The large walls and high ceilings, the lovely angles of natural light, the neutral colors, and the overall openness of the home allowed the art to breathe and help define the space; there were no ornate moldings and lots of color to detract from the art.

Obviously, the very open floor plan was quite distinctive. My parents gravitated towards very neutral colors and natural materials .They had unpainted cabinets, natural wood doors, cork floors in the back hallway, beautiful earth-colored terrazzo floors (with delicious radiant heat–especially a treat after playing in the snow)–all avant garde then.  They had architecturally simple but very high quality matte chrome and nickel hardware – all of this in a time and geographic locale where shiny brass doorknobs and colonial design prevailed (and still does!!).

It looks like the subsequent owners painted one of the living room walls bright red, and obviously they painted the exterior gray-green covering up the natural brick, redwood trim, and rough limestone that my parents worked so hard to preserve.

My parents had window coverings and curtains that were frequently left wide open to allow the vistas of the trees and landscape to add color and definition to the home. The large, expansive windows also contributed to this openness – my Dad loved the outdoors, both working in his yard and enjoying the views from the house. The land had been an arboretum when my Dad bought it, so most of the large, incredible trees (many of them removed, sadly, for the new house)  were there when he bought the land and throughout the 40-plus years my parents lived there . As one of five kids, the three acres were great growing up as we had lots of space to run and sled on the magnificent hill and have hideouts under the great trees. 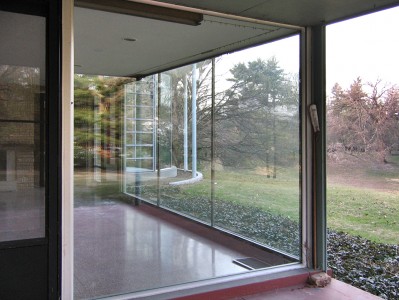 It was interesting growing up in that house. I always felt different from my friends with their traditional cozier homes, but there was also an inherent pride in that differentness. My mother kept the house spotless and in magnificent condition, and you captured in your blog the found items that revealed my Dad’s habit of never throwing anything away. He kept so many of the original materials from the construction of the house. The archaeological finds you detail – bits of wallpaper, hardware, keys – was so characteristic of my dad.  Also, he participated in the architectural design of the home; as a real estate developer, he was also a frustrated architect and a part-time artist. He had a real vision in a time when it was rare to approach home design with such inherent purity and a sense of symbiosis with the land. Your touching photos really capture this! It sounds like the original bathrooms and the kitchen with its meticulous metal cabinets were there to the end, even with the 50’s colors of ceramic tile, etc. in tact.

Also, very striking was the lovely proportion of the house, not only in scale with the lot and the sweep of the land, but also relative to the lovely house across from it–I hope that home does not have the same demise!

I am so grateful that you captured the house. I thought about going in before it was torn down, but I was worried about  what the subsequent owners might have done to change the house that was my home, and also, afraid of how painful it might be. Your photo dialogue has really been a great gift to me and my siblings. I wish my mother were well enough to share it with her – she would be very honored and touched. You have made my late dad proud!!!