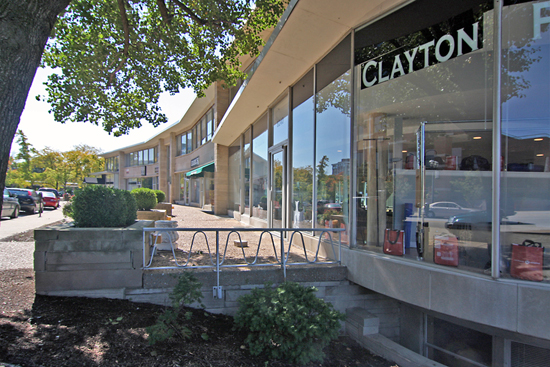 We covered the Clayton-Forsyth building in November of 2009. Here is the story and photos. That post was inspired by the old news that the owner of the building wanted it to come down to build a mixed-use development. But The Great Recession quieted that thought. 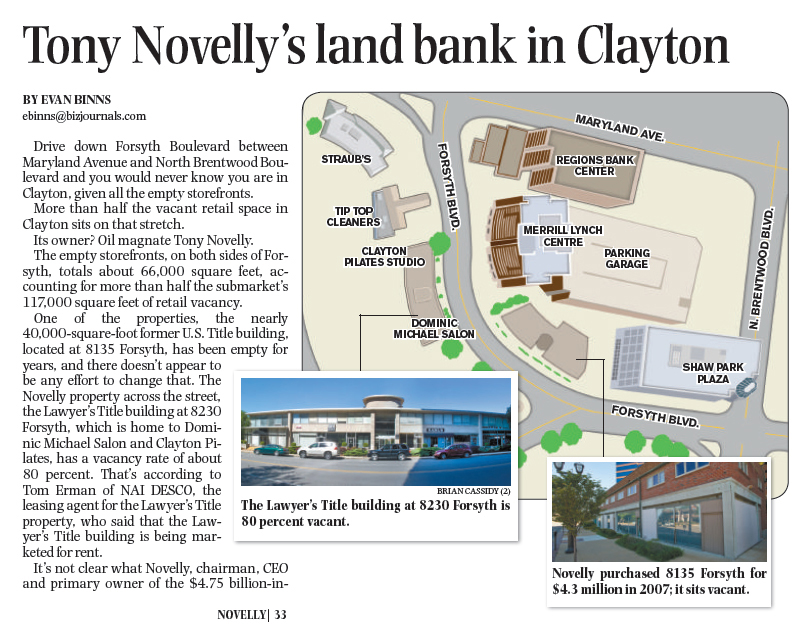 The June 29, 2012 issue of The St. Louis Business Journal brings the thought back as a cover article (above). Turns out the building’s owner – Tony Novelly – has been banking buildings along this stretch of Forsyth, including the Clayton-Forsyth building, which is also known as The Lawyer’s Title building.

With next door neighbor Tip Top Cleaners set to close, their building goes on the market for $1.7 million. Novelly had reportedly tried to buy them out before. The Business Journal has no hard facts about Novelly’s intentions, just strong implications. Even his son, Jared Novelly, says for the article that they have no immediate plans to redevelop all their properties on this block. “We’re always open to redevelopment, but it depends on what the market does. Nothing is going on right now.” 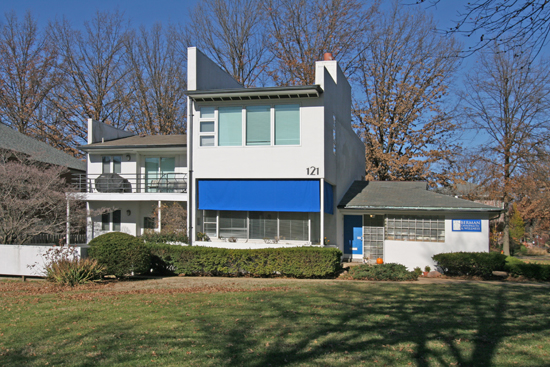 It’s starting to feel like the era of mothballed buildings is in the starting stages of ending. If the real estate market is truly starting to come back to life, the mid-century modern buildings in Clayton’s Central Business District (CBD) are easy targets. Maybe not so much the building above, by architect Harris Armstrong, as it sits on the outskirts of the CBD. 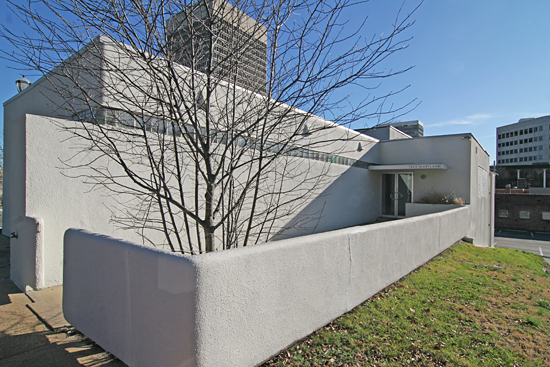 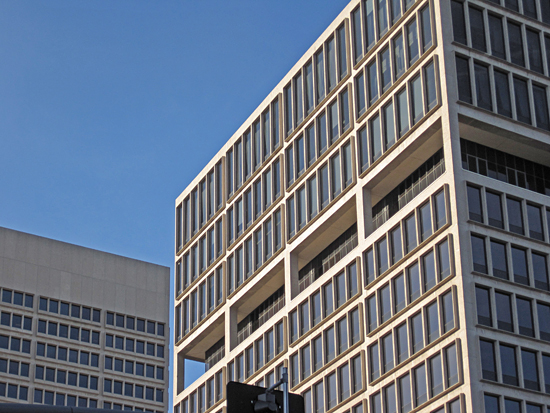 And the Pierre Laclede Center is pretty safe, as they’ve recently spent millions to refurbish both buildings while respecting its mid-century modernism.

After that, just about every other mid-century building in downtown Clayton, MO is ripe for teardown. Many have already been torn down to build new skyscrapers and/or parking. This is a business district, and there is supposedly more money to be made from skyscrapers, which give you density of inhabitants making money. 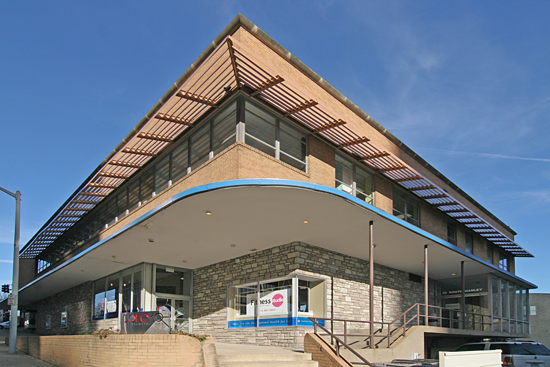 Novelly already owns two corporate skyscrapers right next to and across from the buildings cited on the front cover of The BJ. So he does have a history of investing in the teardown of old buildings for behemoth new business centers. And it is being implied that he might soon have all the old buildings on this block. And past news articles have stated that he intended to tear down the Clayton-Forsyth building for a much larger mixed-use building, so it’s easy to assume his development history on that block will repeat. 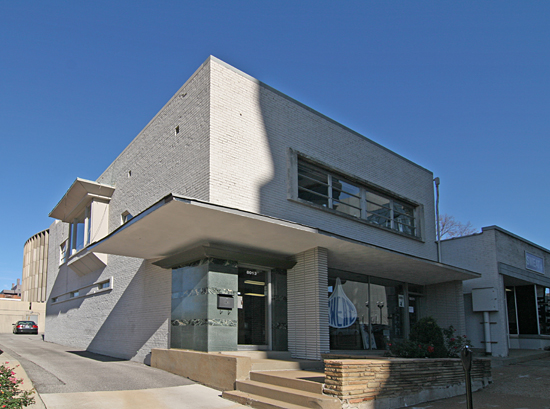 But let’s drop the supposedly inevitable for a moment, and put on our thinking caps. You know what would be brilliant? Embracing the unique mid-century modern heritage of the Clayton Business District, and making money off that. 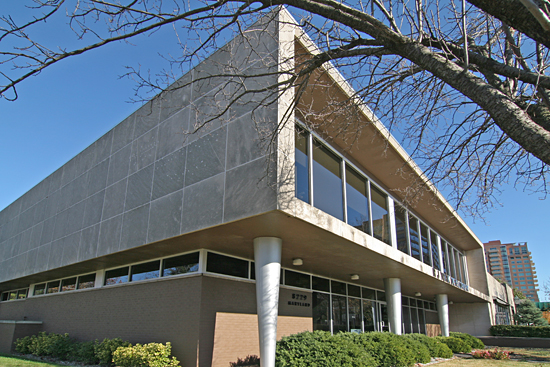 The prosperity and might of the Clayton CBD happened immediately after the end of World War 2. The majority of its buildings went up between 1945 to 1972, making it a quintessential mid-century modern city. It’s a text book example of the power and optimism our country had after the war, and the architecture they used to reflect that. 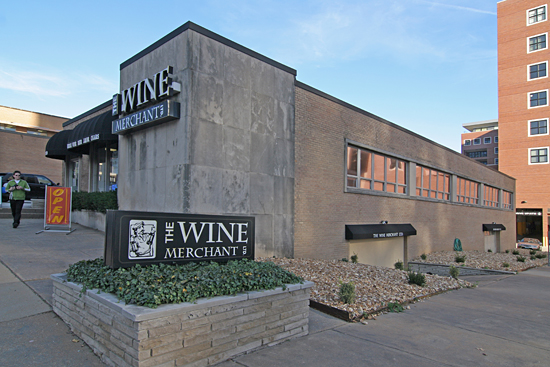 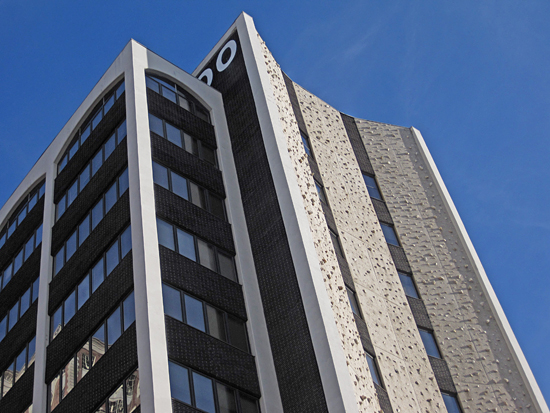 To be a part of the New Frontier and The Great Society, elderly and established downtowns had to utilize federal Urban Renewal funds to demolish and make way for new, modern buildings. In the mid-1950s to late 1960s, the City of St. Louis went on a demolition spree, ridding itself of “ugly,” “unhealthy” and “dangerous” old buildings. 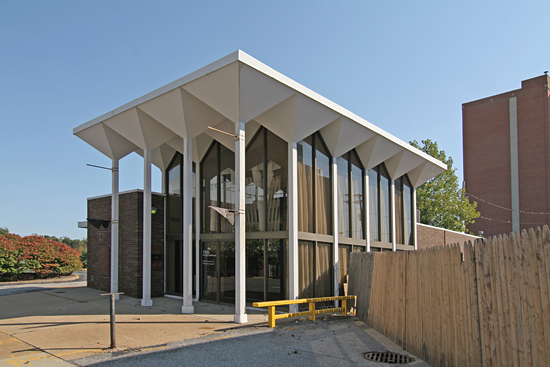 As Downtown St. Louis crushed buildings into dust on the government’s dime, downtown Clayton was a blank canvas of relatively open land with prosperous business-owner residents who had moved there before The Great Depression. Or as the City of Clayton website tells it:

By the late 1940s, Clayton was in the midst of a building and business boom that eventually changed the City from a quaint suburb to the hub of the St. Louis metropolitan area. In 1952, the City re-zoned the area that became the Central Business District, allowing larger commercial and retail businesses to expand. 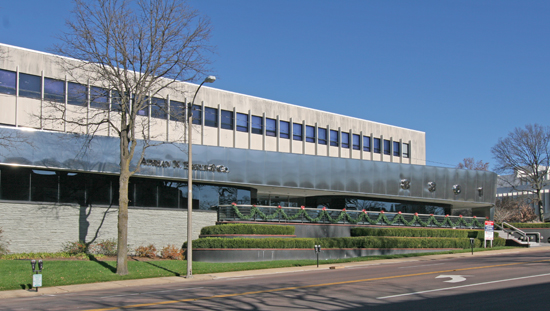 (In 1957), the City abolished the height requirement on new buildings, and plans for Clayton’s first high rises were soon in the works. However, City planners established strict requirements to ensure Clayton streets would not become tunnels amidst corridors of skyscrapers. 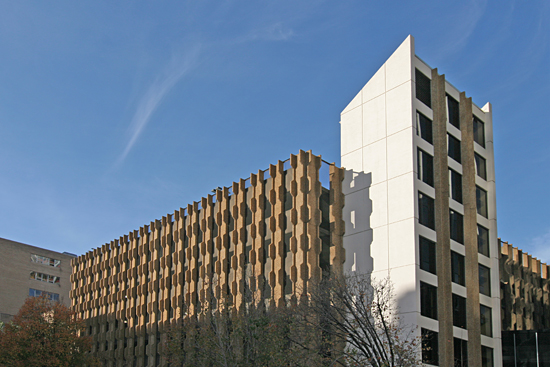 So a boomtown had the foresight to require variety in its buildings. Low-rise and high-rise would co-mingle to create – literally overnight – a new and powerful metropolis that would soon overtake Downtown St. Louis as the business center of Metropolitan St. Louis. That’s the beauty of working with a blank canvas – you can build a city from the ground up in record time and have it architecturally reflect the powerful and expansive mindset of a forward-moving society.

And here’s the kind of buildings they willingly chose to reflect their power. 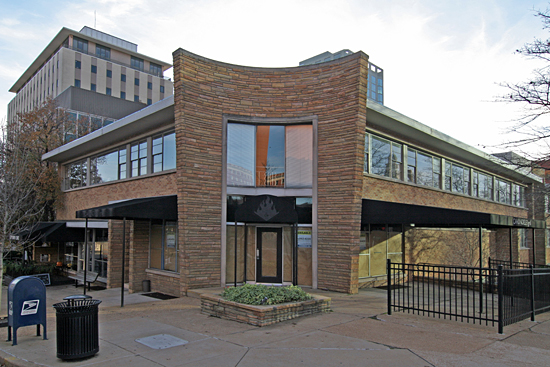 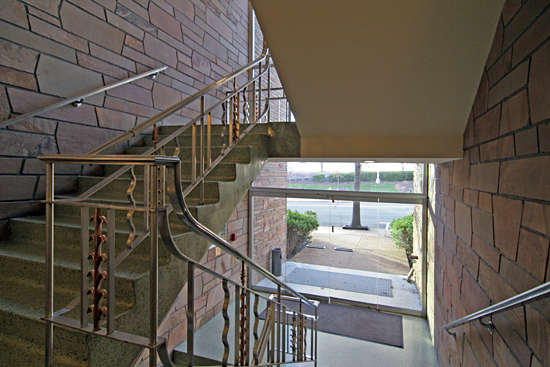 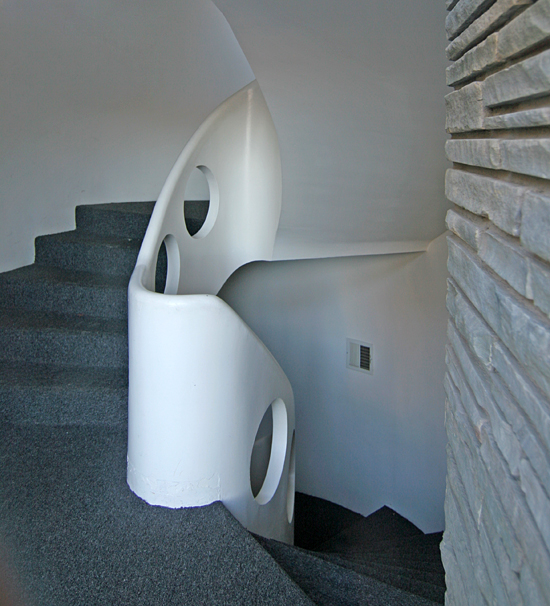 All of the buildings shown in this post are part of the mid-century modern quilt they weaved within 30 years. The largest percentage of them went up in a less-than 20 year period. This is why downtown Clayton has a certain aura about it. Because many of these original mid-century buildings are still in existence, sometimes tucked into the shadow of newer post-modern skyscrapers.  And it’s the melange of tall and small, street-level and sky-level that give downtown Clayton it’s powerful charm. 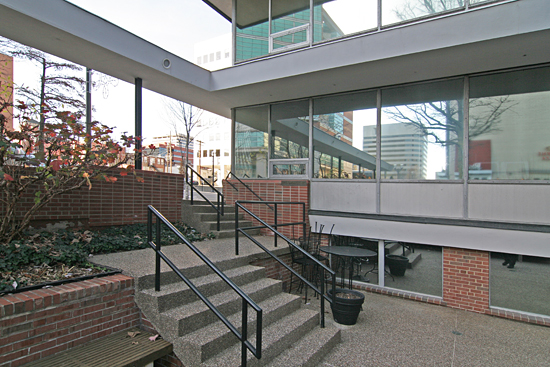 America is still scrambling to understand how to live and prosper in this new Post 911 cyber world with a global economy. All of the old rules are crumbling around us, and that includes the rules of land development. The days of automatically clearing an old building for a new one are looking rather barbaric in hindsight. We simply can no longer afford to be a disposable society anymore. 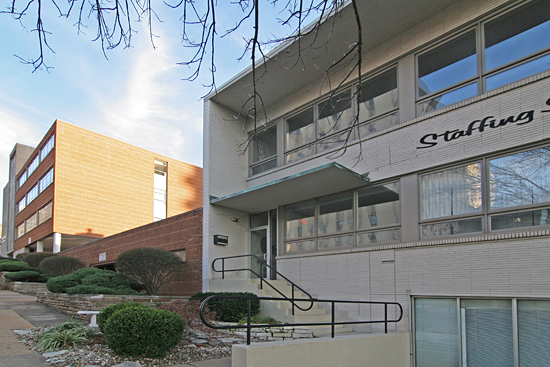 But luckily, holding onto your existing building stock can be just as profitable as the old crush-and-build model was for awhile.  Off the top of your head, how many historic sites can you think of across America that bring in busloads of tourists? Large chunks of New England figured out decades ago that there is money to be made in old buildings and towns, and that local, state and federal governments will even help you turn it into a profit-making destination.  I think any developer of an “ancient” building in modern-day Downtown St. Louis knows what I’m talking about, here. 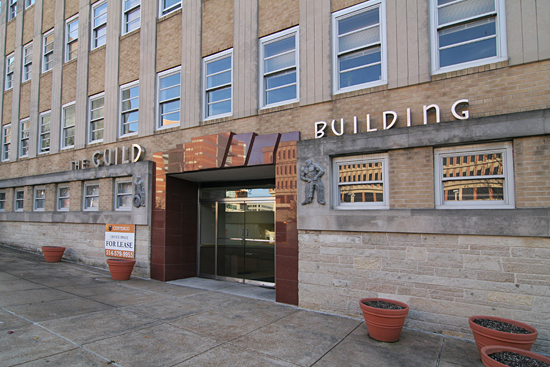 When it comes to the newer realm of mid-century modern architecture and towns, we can look to Palm Springs, California as a great example of preserving residential and commercial buildings. It is easily the hippest destination in the nation, a desert town drowning in tourists disposable income.  And let’s also consider all the building-buff travelers to downtown Tulsa, Oklahoma, which has lovingly kept all of its art deco institutions in tact. 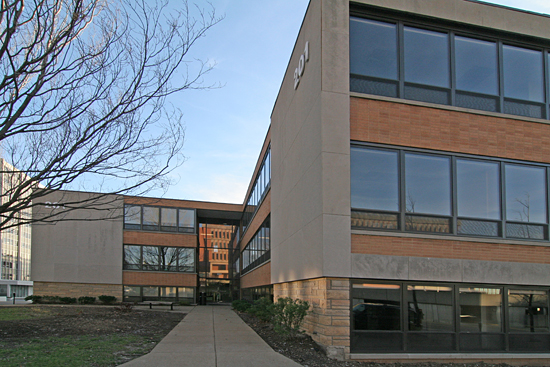 Mid-century modernism is the last great American architectural style. People have been quicker to pick up on the benefits of preserving and using these buildings than past generations were to saving turn-of-the-20th century buildings. Both the building-huggers and developers are realizing that post-war Baby Boomer buildings and towns have several layers of worth and are worthy of keeping.

And you know what? The downtown Clayton Business District is an original, authentic mid-century modern city! It even has a very healthy percentage of its original buildings that prove this. If the money-makers in Clayton were to play their cards right, the CDB could become the Palm Springs of the Mid West. 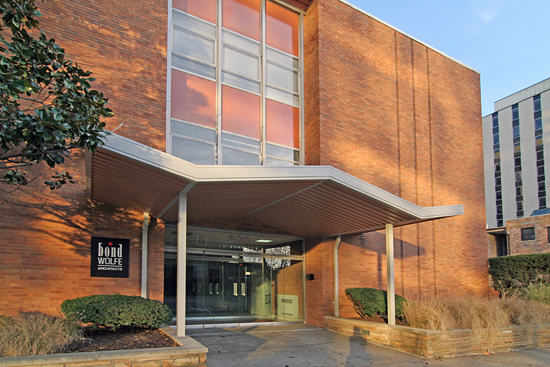 Making money from existing historical building stock is a very real and attainable prospect. It is a compelling thought for Tony Novello while considering what to do with his Lawyer’s Title building. It’s a beloved building that has been allowed to go vacant, but it doesn’t have to be that way.  Development is as much about marketing as it is capital expenditures and improvements. Maybe fly a mid-century modern flag up the pole and see who salutes the Mid West Palm Springs idea?