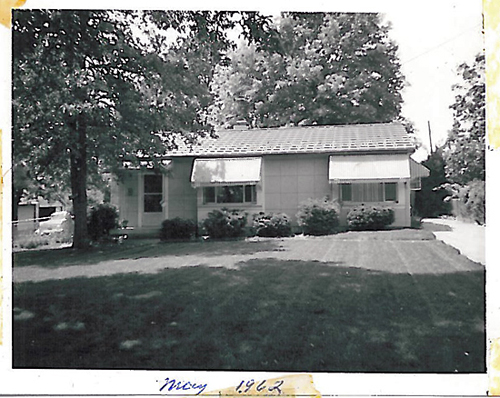 My friend Tim Wahlig (he of the Popular Mechanics Home Handyman encyclopedias) once mentioned that his parents’ first home was a Lustron in Brentwood. I begged to see photos. And now his mother, Pat, has yanked out the old photo album to share with all of us her photos and memories of living in – and remodeling – a Lustron.

The home shown above was built in 1949. It is gray Lustron #1067, according to the Lustron Registry. Pat and her late husband Bob were married in July 1957 and moved into this home over Labor Day Weekend, a month after their wedding. 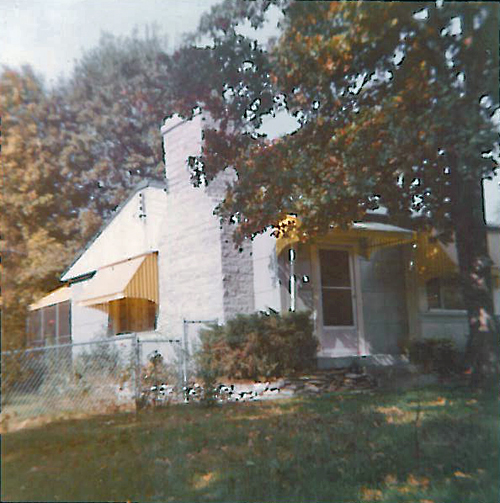 They bought it for $15,000 from two spinster ladies, one who was an interior decorator, and both of them gardeners who had a prize-winning garden along the driveway. At the time of the sale, Pat and Bob asked if the flowers would remain, and they said “yes.” Come moving day, they noticed that everything had been dug up!

Pat says they “knew absolutely nothing about Lustron” when they saw it, nor were they looking for a house with no basement. But at 1,093 square feet “that house just fit us. The inside storage was good – the closets ran to the ceilings. Being newly married, we hadn’t accumulated anything, and we had no furniture so the built-ins were just perfect.” 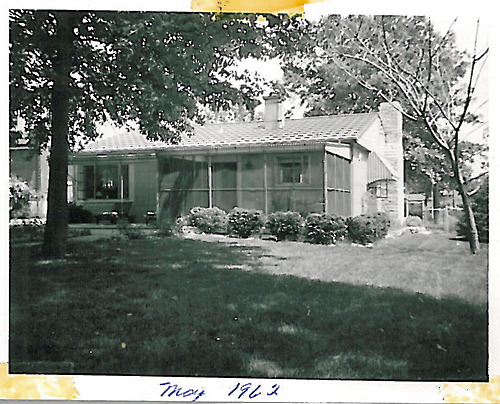 Bob Wahlig was a very handy man, and almost immediately he set about personalizing, rearranging and adding to the Lustron. Like the screen-porch he built on the rear. 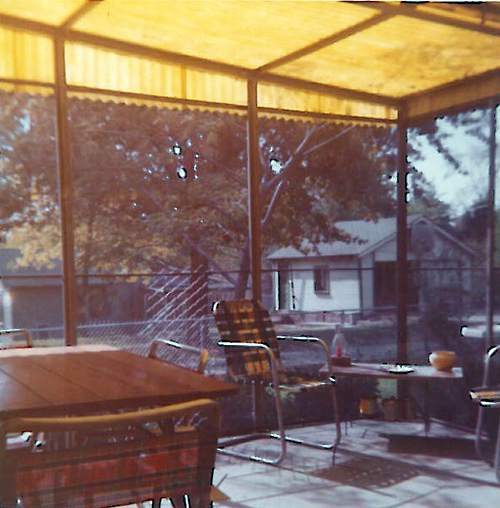 Bob also pulled out the wrenches and moved some exterior walls to change it from a recessed side entry to a flat front facade with the door facing the street. Pat provided this link, and scroll half way down you will see the original floorplan of their home. She added that the photo under the floorplan drawing is exactly how their home looked before the remodel, and that it “was simple to square off the porch; everything simply screwed together.” 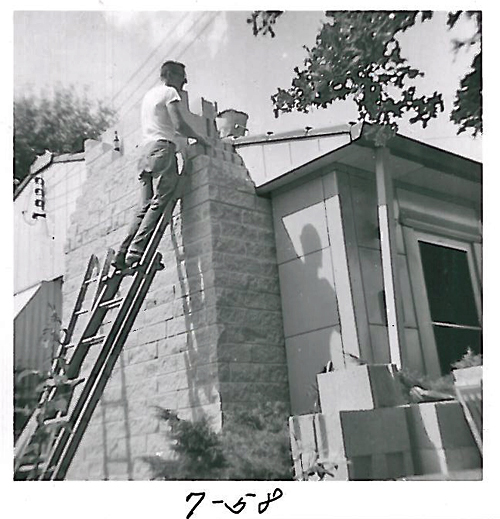 Moving the front door left room on the side for Bob (on the ladder) to build a chimney and add a fireplace inside. 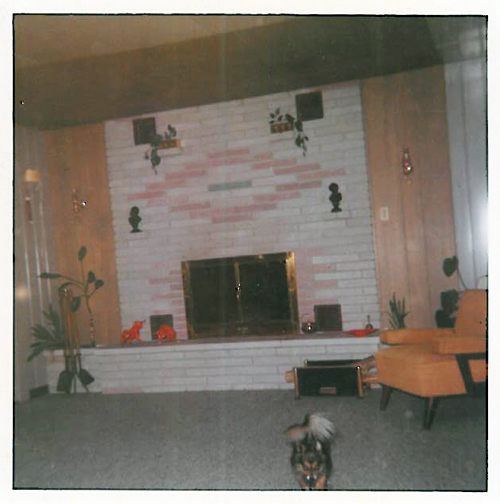 Bob had a bunch of sample bricks in different colors, so made the patterns you see above. The firebox was a Heatlator “that was very efficient as it blew heat right into the room, even without an interior fan.”

The fireplace left them without porcelain panels for the sides and the ceiling, and they looked into getting panels by contacting gas station builders. They were told none were available, but they could be custom made, but the cost was prohibitive, and color matching couldn’t be guaranteed.  Bob wound up using wood panels for the ceiling, and these matched the new panel he would build for the dining room pass-though (more on that in a bit). 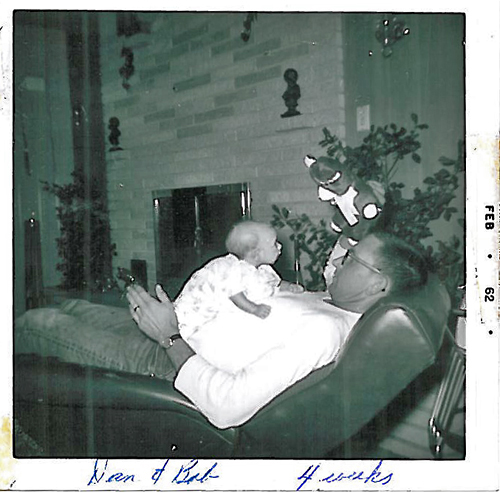 Pat & Bob’s first child, Daniel, was born early in 1962. There he is with his Dad in the recliner by the fireplace. With the leftover bricks from the project, Bob built a planter under the living room bay window and put his aquarium in it! 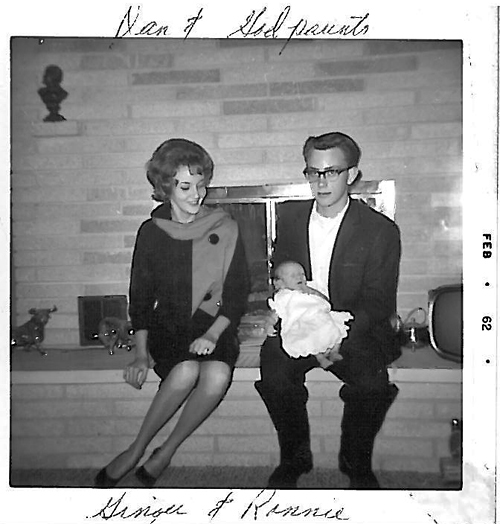 And that fireplace became the focal point for all official family photos, like Dan with his godparents (above) who look fabulous! 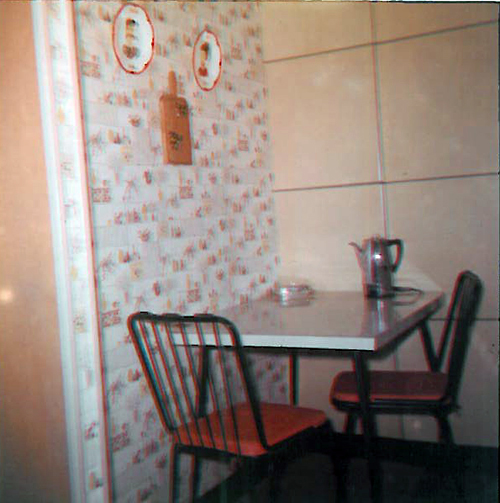 Lustrons came with a floor-to-ceiling, built-in buffet that divided the living and dining rooms. Tons of storage and a handy pass-through space. They needed that storage space, but also needed a bigger living room and space to expand their dining room table. So Bob unscrewed the buffet and moved it against the wall of the service and storage area. In it’s place he built the wood panel wall (shown above), which added 22″ to the kitchen, which was enough room to add this small table and chairs.  Also of note is that rather than the customary ceramic tile floor in most Lustron kitchens, theirs was a dark brown asphalt tile.

This wood panel also gave them the rare opportunity to hang something on a wall! With all the built-ins, there wasn’t much space to hang pictures, so Pat didn’t have to confront hanging things with magnets or screwing them into the steel panels. 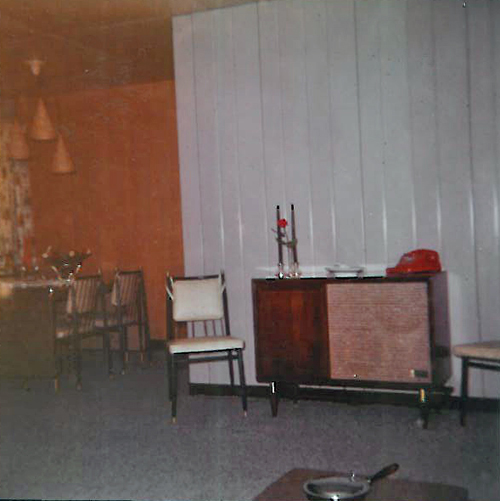 They absolutely loved living in the Lustron; “It simply worked perfectly for us. Ours was the party house for all our friends.”
And what did their parents think of them moving into a steel house?

“Mom just loved it! Dad did, too.  He enjoyed the first time Bob’s dad, Tony – who was a trim carpenter – came over to see the place. ‘Tony! Just look at this house. No carpenter needed!’ Tony laughed as he’d come in the back door and had his hand on the kitchen counter. He looked down at it, tapped it and said, ‘Well, this must have taken a carpenter!’ ” 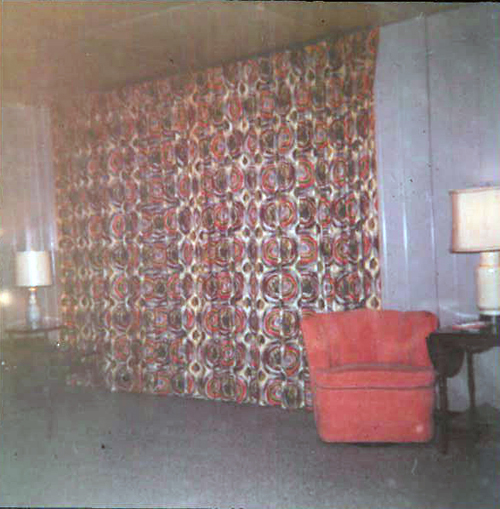 Being an all-steel home, did it have special upkeep issues?
“Absolutely none! Every spring I was up on the roof scrubbing it while Bob worked on the awnings. I washed all the walls and ceilings every year, too. I remember the first year that I washed them, they had a yellow film, but the two old ladies didn’t smoke. Bob concluded it was because the furnace had no filter.” 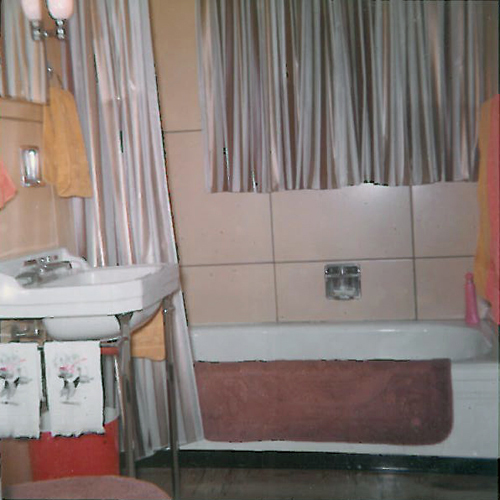 And was it comfortable in the summer and winter?
“The heating system was just AWFUL!!! The furnace was up in the utility room ceiling, behind the Lustron panels, and hot air just blew through the ceiling – no vents! While the concrete floors were freezing, so we carpeted them.” 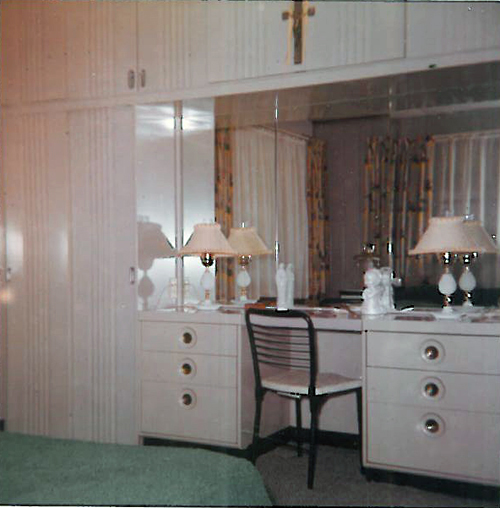 “Bob did cut a hole in the front bedroom wall, under the window, for an air conditioning unit. Back then it was rare to have A/C.

“A couple years after moving in, we bought a washer and dryer. The utility room had built-in hooks for a clothes line to dry laundry.  But since there was no way to vent the dryer outside, the moist air blew right into the house. My windows seemed dirty all the time! But the humidity didn’t bother us. We were young, so it was all OK.”

They sold the Lustron in early 1963 for around $17,000 to a young couple with two toddlers. “We were really surprised they’d be interested in a two bedroom home. But we were glad they were. It wasn’t an easy house to sell!” 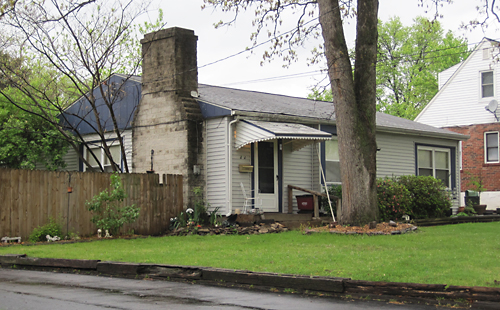 The Louis Avenue Lustron still stands today, but it now looks like this. When I shared this photo with Pat, she replied, “UGH!!! That’s like putting plastic on a brick house!”

Nice to see that Bob Wahlig’s chimney remains, as does the original roof. Pat remembers that some owners after them turned their screen-porch into a proper bedroom that runs the entire width of the back of the house. County records show that the addition brings the total square footage up to 1,489. They also list its style as “Ranch.”  Eye roll.

Ultra big tons of thanks to Pat Wahlig for sharing her photos and memories with me, and to her son Tim for continually reminding her to dig out these photos and bringing them in for me to scan.