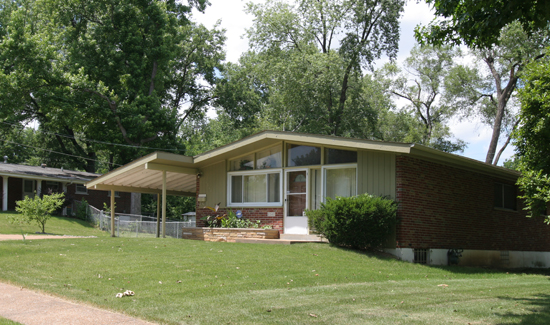 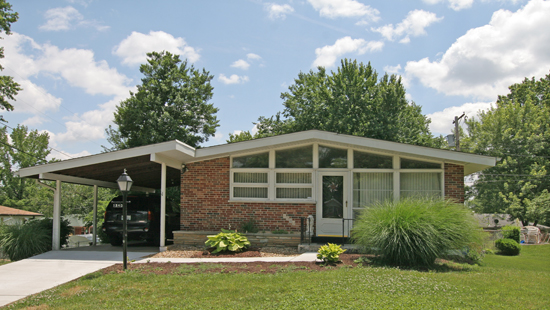 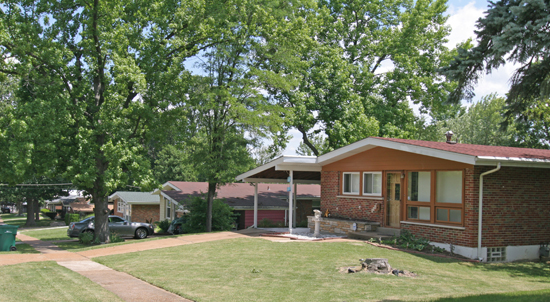 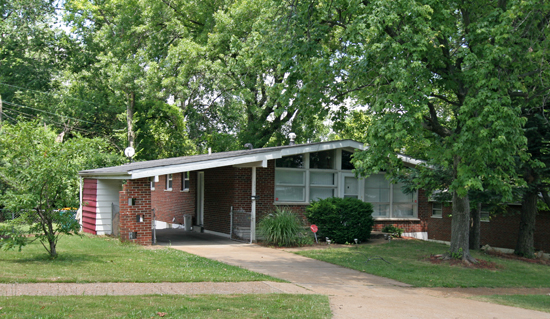 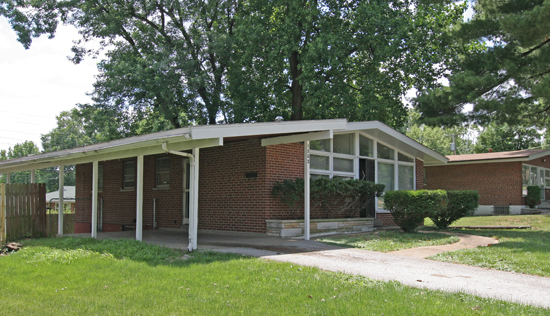 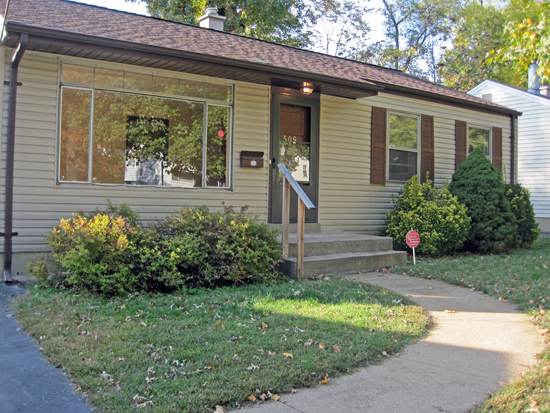 The first house that my mother and father bought after I was born was the one above, at 509 Teston Drive in Ferguson MO.  It was built in 1953 as part of the Ferguson Park subdivision, and was (and remains) 864 s.f., with a full basement. Part of that basement was finished, because my father did it in a hurry to host the annual family Christmas party, and there just wasn’t enough room to cram them all in upstairs.

The house is now vacant and in the hands of HUD out of Kansas City, Kansas. Meaning, it was foreclosed. The last buyer paid $72,000 for it. It is available now, per this Zillow page. 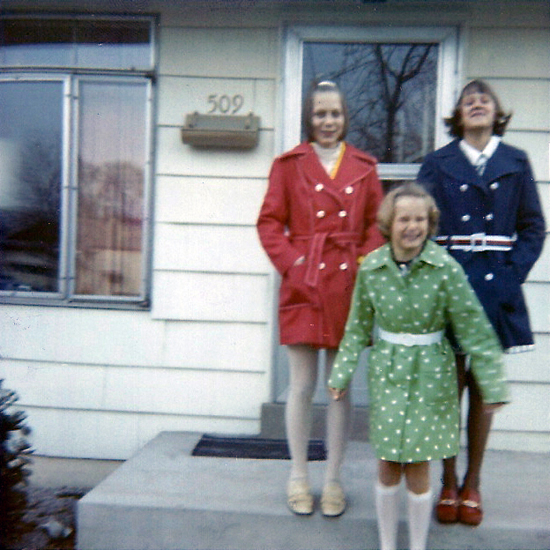 The vinyl siding is an update, which happened sometime in the 1990s. From the photo above of my half sisters on Easter 1967, you can see it was originally clad in asbestos shingles. The kind that left a chalky film on your finger when you rubbed it.  And we didn’t have a hand rail. City Halls weren’t as concerned with our safety back then; personal responsibility was the standard operating mode.

And note that it’s still the same picture window in both photos, as well as the wood front door! 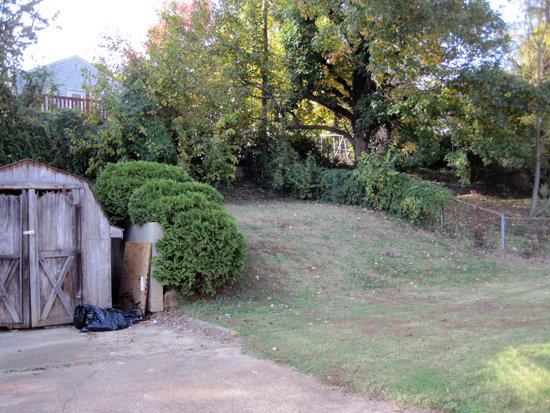 Here’s the backyard in 2011. The hill doesn’t seem as steep as it did back in the day. My being older is part of it, I’m sure, along with natural settling and erosion. Note the cinder block wall to the right of the sad, faded little utility shed. 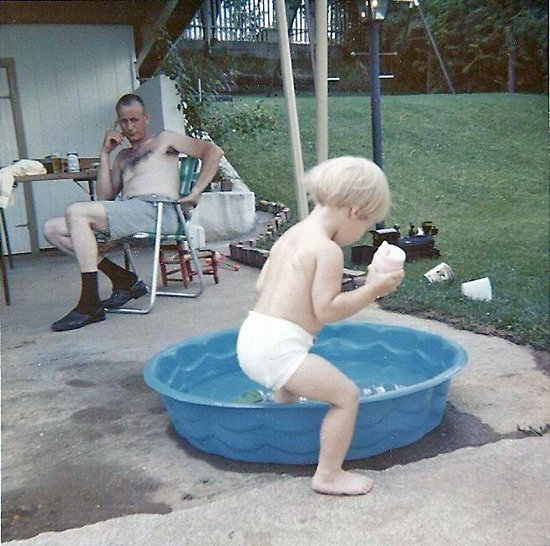 It used to be the wall of our carport, which was also my dad’s hangout. The place where I’d sneak sips of his ever-present frosty cold Busch while he mowed what seemed like a massive hill. 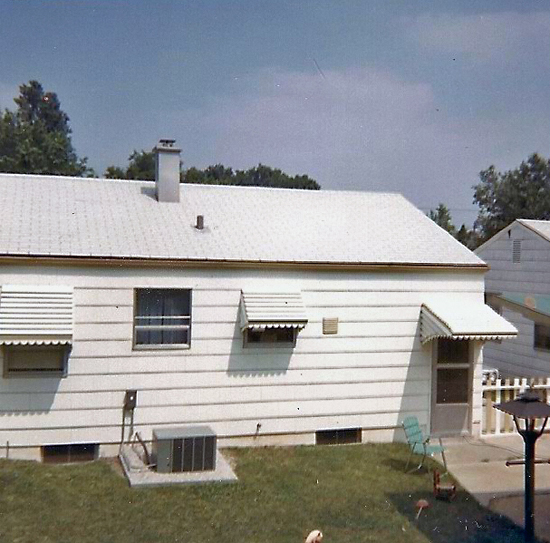 This is a shot my mom took from the top of the backyard hill in 1967. The metal awnings are long gone – hope they recycled them! 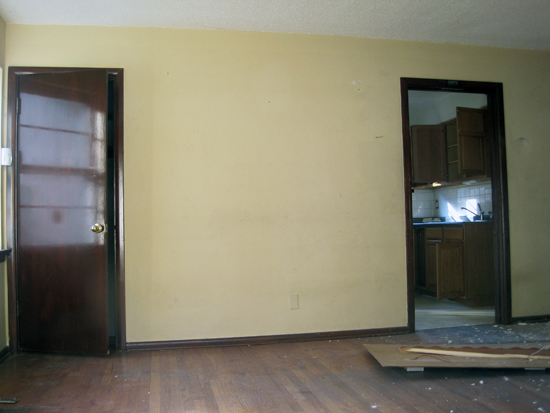 Since the place is currently vacant, I could peer in the windows and see the inside for the first time in 40 years, and I was struck by how much it was still the same, and how much I remembered even though I was under 5 years old during the 3 years we lived there.

That’s the same wood floor; we had bright orange red carpeting on the floor save for the bedrooms, and I clearly remember the size and color of the floorboards (seeing as how I spent most of my time down there). 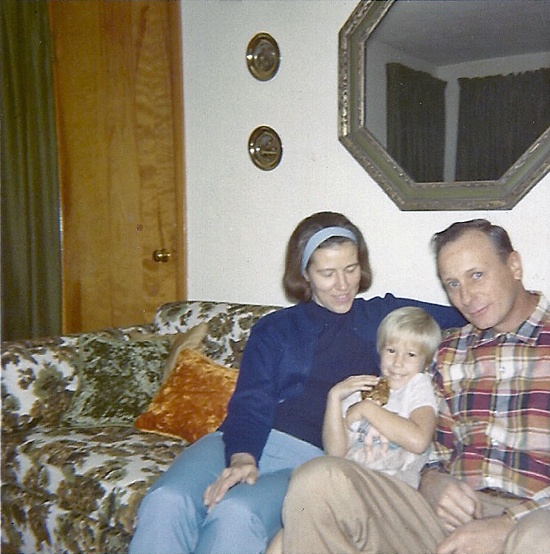 This photo of my mother, father and I shows the closet door and handle is the same, though it – and all the woodwork – received a darker coat of stain over the years. 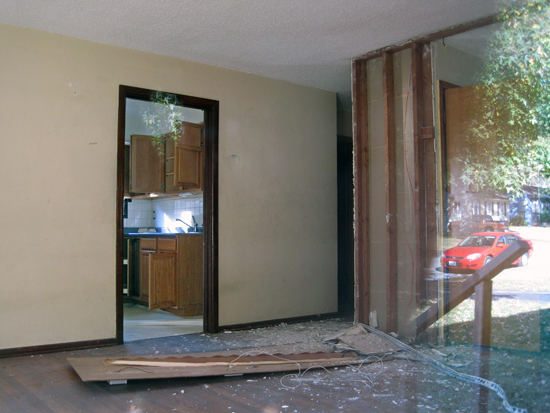 Whomever is working on the house is tearing down the wall between the living room and one of the 3 bedrooms. Also note the kitchen. 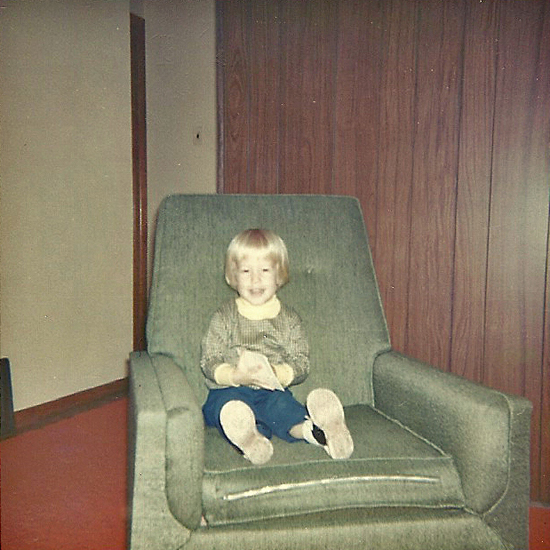 The wall coming down was once the classic, ubiquitous wood paneling. (Side note: I kept that green chair until it literally deteriorated in the mid-90s.) 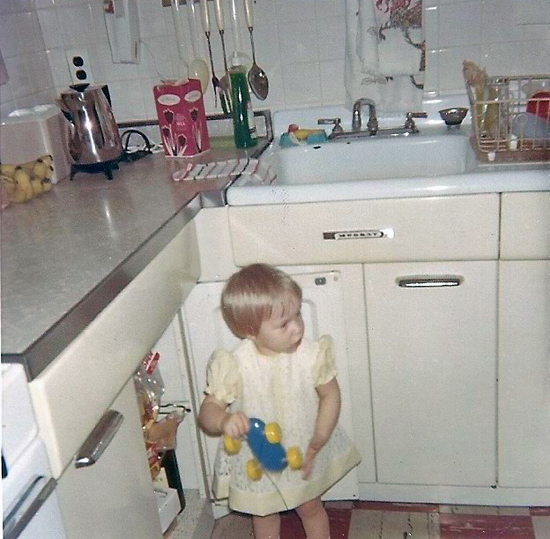 The kitchen was patterned asbestos floor tile and metal cabinets. When they bought the place, the cabinets were olive green that they had spray painted white. I noticed that the kitchen retains the same white tile backsplashes with black trim, but everything else was obliterated. Shame, ‘cos those cabinets are sweet.

Anyone who knows their metal cabinets, can you decipher what that label to the right of my head says? I can’t get the picture any larger to figure it out, so could use your expertise.  Oh, and I still have the GE handmixer you can see hanging on the wall. Still works perfectly!

I didn’t get to see the bathroom as it is today, which originally had light salmon pink wall tiles. I can’t share any photos from back in the day because all of them feature me in the tub or potty training, so you understand not sharing, right? 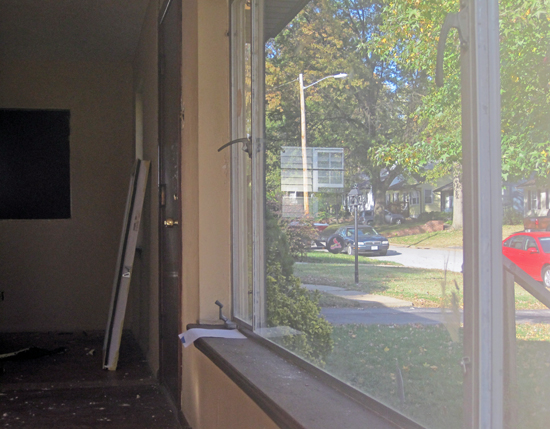 The thing that struck me most was seeing the original metal frame windows and sill in the living room. Because it sat low to the floor, I spent a lot of time peering out these windows, keeping an eye out for my pal Julie Schemmer across the street so I could go out and play, or fiddling with the cranks and levers till I was told to stop or I’d break them. That was obviously an over-exaggeration, ‘cos here they are over 40 years later, ma!

I’m amazed the house has gone through so many updates and changes, yet these windows remain. Seeing a replacement window propped up against the wall makes me wonder if they plan to replace the picture window, too. That would be a shame if they did, because the original windows just need to be sealed properly rather than replaced with something that will most likely look wrong. 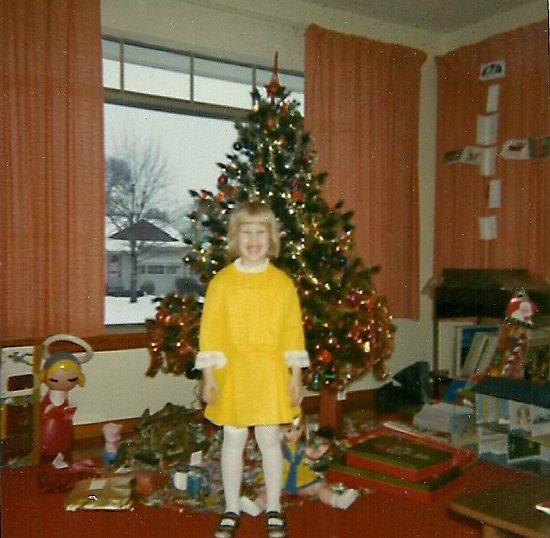 Look out the window and you can see we had snow for Christmas of 1969. The drapes with the holiday cards pinned to them is the same window I peered through for the shot above this one. Under that window is a Zenith stereo with those kick ass Circle of Sound speakers. On the floor below it is the doll house I wrote about here. And I suppose it’s appropriate to say that it was while living here that my mother found Northland Day Nursery School as she was cutting through the back way from this house to West Florissant.

It was a genuinely moving thrill to be able to spend a little time with this house once again. Here’s hoping it finds a good new family – and that they leave that picture window as is!